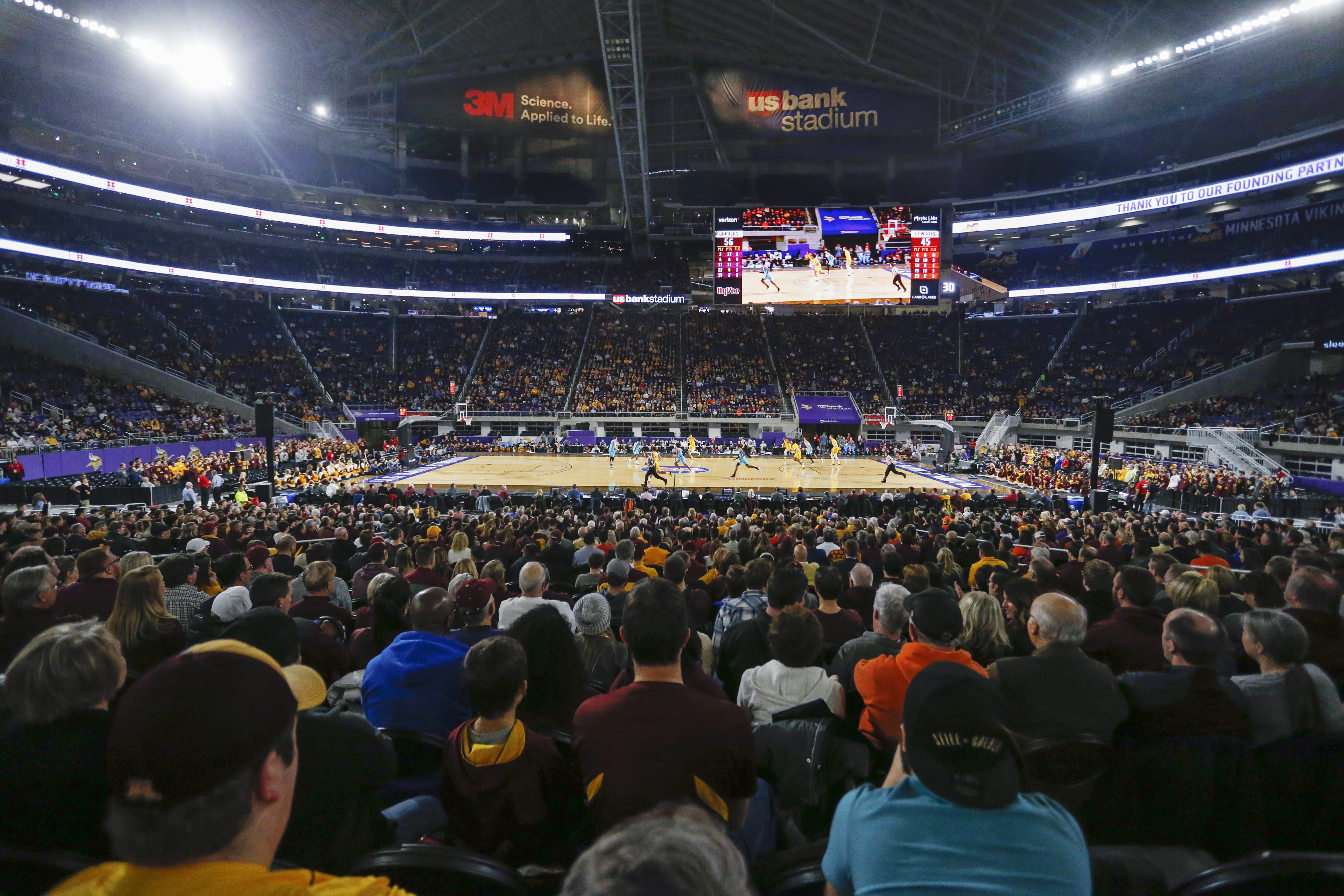 Next to the Masters golf tournament, admission to NCAA March Madness is the hottest ticket in the spring.

The Men’s and Women’s Final Four, of course, attract the most attention, but the preliminary rounds generate plenty of excitement too—both among fans and among hosting cities, which aim to leave an impression by reaching capacity crowds and promoting lively ancillary events.

This is especially true for cities that are returning as hosts after long absences, and for venues making their tournament debut.

For the first time since 1984, when the Kingdome in Seattle hosted as a first-time venue, this year’s Men’s Final Four will be held in a venue that has never previously hosted any tournament round. U.S. Bank Stadium in Minneapolis will get that honor when it hosts April 6 and 8. Part of the reason there haven’t been more first-time hosts for the finals is that, until recently, Final Four stadium venues served as regional hosts the year before. But the NCAA has decided to move regional rounds back to arena settings, leaving new stadiums like the one in Minneapolis to host for the first time.

Still, U.S. Bank Stadium has had some recent practice at hosting basketball. On November 30 and December 1, the stadium hosted the U.S. Bank Classic, an eight-team doubleheader that included hometown favorite the University of Minnesota. NCAA personnel attended the event, and according to Melvin Tennant, president and CEO of Meet Minneapolis, they left confident that Minneapolis would succeed with the Final Four. “The good news, too, is that SMG manages this facility and SMG also manages other facilities where the NCAA has conducted very successful Final Fours,” Tennant said.

The last Men’s Final Four in the Twin Cities was staged in 2001 at the Metrodome, which was demolished to make way for the new stadium. But the Twin Cities of Minneapolis and St. Paul have seen major downtown changes since that time. And they are coming off a year in which the NFL’s Super Bowl in 2018 got the city’s fan base revved up for big sports events.

“All of the volunteer spots were snapped up in an hour,” said Tennant. “Although we don’t need as many volunteers for the Final Four as we did for the Super Bowl”—just 2,000, compared to 10,000 for the football game—“I think the experience that people had with the Super Bowl got them excited about the possibility of being able to welcome the world to our city.”

When the 2020 Men’s Final Four moves on to Atlanta, it will mark the second straight year a Men’s Final Four will be held in a venue not previously used as a men’s preliminary-round tournament site.

Minnesota will continue its momentum when it hosts the 2022 Women’s Final Four at Target Center in downtown Minneapolis. But this year, the women’s showcase returns to Amalie Arena in downtown Tampa (April 5 and 7) after just a four-year absence.

“Our downtown footprint and everything around the arena has changed so drastically since 2015,” said Claire Lessinger, the Tampa Bay Sports Commission director of special events and executive director of the local organizing committee. “There’s a very new package to be selling, which is clearly exciting not only to the NCAA, but (also for) the women’s basketball fan base and the visitors that will be touching our community.”

The extension of the Tampa Riverwalk, a 2.6-mile pedestrian trail along the Hillsborough River, was completed a year after the last Women’s Final Four. It proved popular among fans attending the 2017 College Football Playoff National Championship Game at Tampa’s Raymond James Stadium and all the ancillary events in downtown Tampa connected to that game, as well as among those in town for the 2018 NHL All-Star Game.

“The coming-out party for the Riverwalk was really the College Football Playoff national championship, and how we utilized and activated that Riverwalk to serve as the main corridor to and from major events is a model we’re replicating for the Women’s Final Four,” said Lessinger, who also served as the 2015 Women’s Final Four tournament manager.

“There’s a lot in our toolbox that we know and learned from that we don’t need to replicate, but then we also have so many new assets to showcase,” said Lessinger.

As with the men’s tournament, the NCAA examines new venues as potential sites for women’s regional or Final Four games. But the NCAA also likes to return to sites that previously served as successful hosts. “It’s a dual piece, if you will,” said Debbie Richardson, a member of the NCAA selection committee and senior associate commissioner with the Atlantic 10 Conference.

The Women’s Final Four took place in Columbus, Ohio, last year, and in Dallas in 2017. In the same announcement that revealed Minneapolis as the site for the women in 2022—its first time hosting the Women’s Final Four since 1995—the NCAA revealed that it will return to Dallas in 2023. “Dallas’ performance as a city and as an arena was tremendous,” Richardson said. “Columbus came right behind them and just knocked it out of the park.”

Since the departure of the NHL’s Whalers to North Carolina in 1997, the XL Center in Hartford, Connecticut, has evolved into a college basketball hotbed for both men and women. Of course, it doesn’t hurt to have the University of Connecticut’s women’s basketball empire under coach Geno Auriemma in close proximity. “We’ve been spoiled with Geno being here—expectations are high and they’ve delivered on them,” said Bob Murdock, president of the Connecticut Convention & Sports Bureau.

At the women’s regional in 2004—the year UConn won both the men’s and women’s NCAA basketball championships—attendance for the two sessions (29,108) at what was then named the Hartford Civic Center ranks second all-time for women’s regionals. Only Memorial Gymnasium on the Vanderbilt campus in Nashville (29,958) tops it, a record set in Tennessee’s 39-0 season in 1998.

But for NCAA championships, there may not be an area in the country with more synergy than Connecticut for this year’s first weekend of the men’s and women’s tournaments. The XL Center in Hartford is a men’s first- and second-round site (March 21 and 23) for the first time since 1998. “It’s not just what’s going on in the building,” Murdock said. “There’s just a lot of people that come to be near the event. We’ve been talking about it for months and months with the restaurants and attractions.”

And since the top-seeded women’s teams will host first- and second-round games on their own campuses, chances are good that UConn, ranked in the top five all season, will be playing in nearby Storrs. On top of that, the Women’s Frozen Four (March 22 and 24) hockey championship will be held about 30 minutes south of Hartford at People’s United Center in Hamden, with Quinnipiac University as the host institution.

Despite 2014 renovations at XL Center that upgraded restrooms and the concourse areas, as well as the installation of new LED lights last fall, political haggling continues over the long-term future of the arena. Murdock is among those who believe that a modern facility is necessary to keep Hartford in the running for top sports events like this year’s men’s tournament.

With Dawn Staley taking the University of South Carolina to new heights as the coach of the Gamecocks women’s team, another regional hotbed has developed for women’s basketball. Twice in the last four years the school has set attendance records as a first- and second-round host in the women’s tournament.

This year the city will host men’s basketball as well, with eight teams taking the floor for first- and second-round games at Columbia’s Colonial Life Arena. It’s a new venue for the men and the first time since 1970 that the men’s tournament will be played in Columbia. Only a few blocks away on the USC campus stands Carolina Coliseum, the site of Columbia’s only previous turn at hosting the men’s tournament.

Last year Scott Powers, executive director of Experience Columbia SC Sports, wanted to experience the atmosphere surrounding an NCAA first-round venue. He could have made the short drive up to Charlotte, but instead he traveled to Wichita, Kansas, where INTRUST Bank Arena was hosting the men’s tourney for the first time. It was the first time tournament games had been played in the city since 1994, when the games were played at Kansas Coliseum.

“It was one of the best decisions I made to go to Wichita instead of Charlotte,” Powers said. Nearby powerhouse Kansas was one of the eight teams that played, allowing Powers to witness the electricity that he’d like to duplicate in Columbia. Among the valuable intelligence he picked up was how the city cultivated the atmosphere in the downtown area outside the arena to engage not just fans but the entire community. Powers confesses that during meetings leading up to the NCAA tournament, his colleagues have heard him repeating the mantra, “Wichita, Wichita, Wichita.”

Powers and other local organizers have held community meetings to address concerns and exchange ideas, and they also hope to apply some of the ideas gathered from Wichita, which had the distinction of launching two teams to the Final Four from the same site: After Wichita, the Kansas Jayhawks captured the Midwest Regionals, while Michigan won the West.

A Capitol Idea in Albany

Albany, New York, is in the middle leg of a three-year run hosting tournament basketball at Times Union Center, owned by Albany County and managed by SMG. This year the venue will hosts its third women’s regional in the last five years, and next year the men will arrive. It’ll be the men’s first appearance in Albany since the 2003 East Regional where Syracuse, led by freshman Carmelo Anthony, advanced from there to win the championship in New Orleans.

Bob Belber, the Times Union Center general manager both today and in 2003, recalls traveling to New Orleans for the Final Four that year. “That was a fun time for me personally to be able to do that, coming from our regional, and being able to see the team that won it here actually take the whole thing,” said Belber, who was marketing director at Times Union Center when the first and second rounds were played there in 1995. “I still remember the Villanova-Old Dominion game that went into quadruple overtime that year (1995). Villanova was expected to win that, and Old Dominion ended up pulling that game out.”

After a $30 million renovation project, highlighted by an atrium at the entrance, Times Union Center is positioned to keep attracting NCAA events.

There are certain markets like Phoenix and Atlanta that have hosted mega-sports events in back-to-back years. Though Minneapolis’ attempt to lure the College Football Playoff has fallen short, it is now in the same league, and hopes to keep the successes coming.

“Our city government actually created, within the city coordinator’s department, a special events office so that all the city responsibilities could be coordinated,” said Tennant. “That was something we didn’t have before we booked both the Super Bowl and the Final Four.”

Local officials are hoping that coordination pays off and that the newest venue in the NCAA hosting rotation leaves a lasting impression—and catches the eye of organizers of other big events.