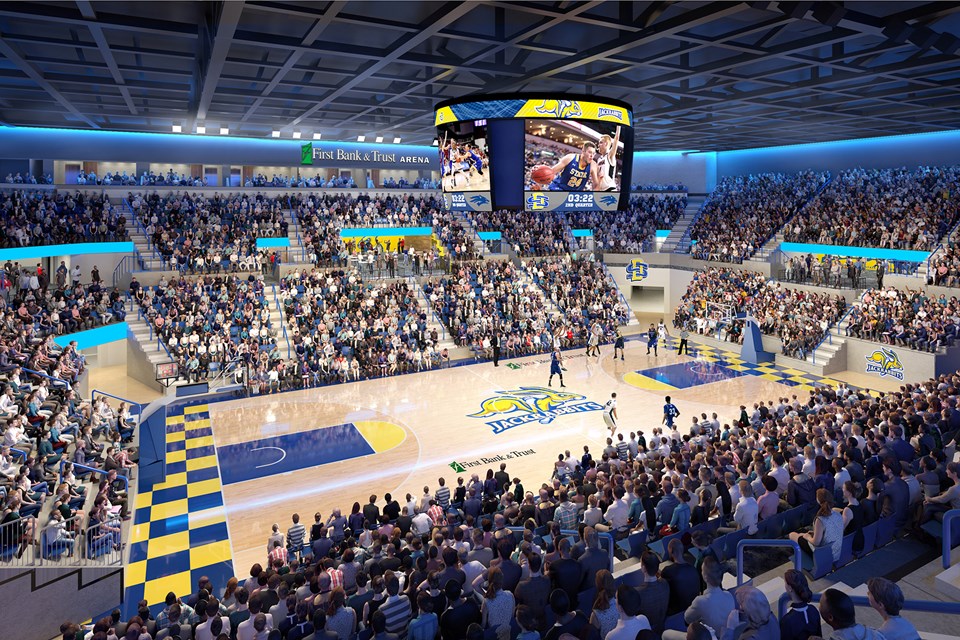 South Dakota State University’s Frost Arena, home for the basketball, wrestling and volleyball teams of the Jackrabbits, will be rebranded as First Bank & Trust Arena after the local banking institution committed $20 million to the venue’s renovations.

The $20 million is the largest single gift in the history of South Dakota State. The project, pending approval by the South Dakota Board of Regents, is estimated at $50 million and fundraising is ongoing through the SDSU Foundation. The renovation project is expected to take two years and will be done in phases to avoid relocation and interruption of South Dakota State events.

“The long-standing generosity of First Bank & Trust and the Fishback family continues to have a major impact on our university,” said South Dakota State President Barry Dunn. “The generous gifts provided over many years have been important to the success of our students, faculty, alumni and also the community of Brookings. Because of this gift, the renovation of Frost Arena will allow us to improve a facility that is home to many events, including Jackrabbits athletics, commencement, concerts and lectures, and continue its rich history of being a regional center of activity for the state and the university.”

The renovated venue, which when completed will have 5,500 capacity, will include new premium seating areas and suites, state-of-the-art video board and display systems, an enhanced sound system, expanded concourse and improved restrooms. New and improved locker rooms and offices are also a part of the design.

“First Bank & Trust shares SDSU’s progressive vision and relentless pursuit of excellence, combined with a passion for impacting our community,” said Kevin Tetzlaff, president and chief operating officer of First Bank & Trust. “Together, we’re committed to working hand-in-hand to create the best for Jackrabbit fans and the city.”

Frost Arena opened in February 1973 at a cost of $3.685 million and was named in honor of former Jackrabbit basketball coach and athletic director R.B. “Jack” Frost. The renovated venue will include an interactive space highlighting the history of SDSU athletics as well as being the new home of the Jackrabbit Sports Hall of Fame.

“We couldn’t be prouder to continue our partnership with First Bank & Trust,” SDSU Director of Athletics Justin Sell said. “First Bank & Trust has meant so much to the university, the community, the state and the region. To enhance the footprint of the Stanley J. Marshall Center and create a first-class facility for our student-athletes, coaches and fans is incredibly exciting.”