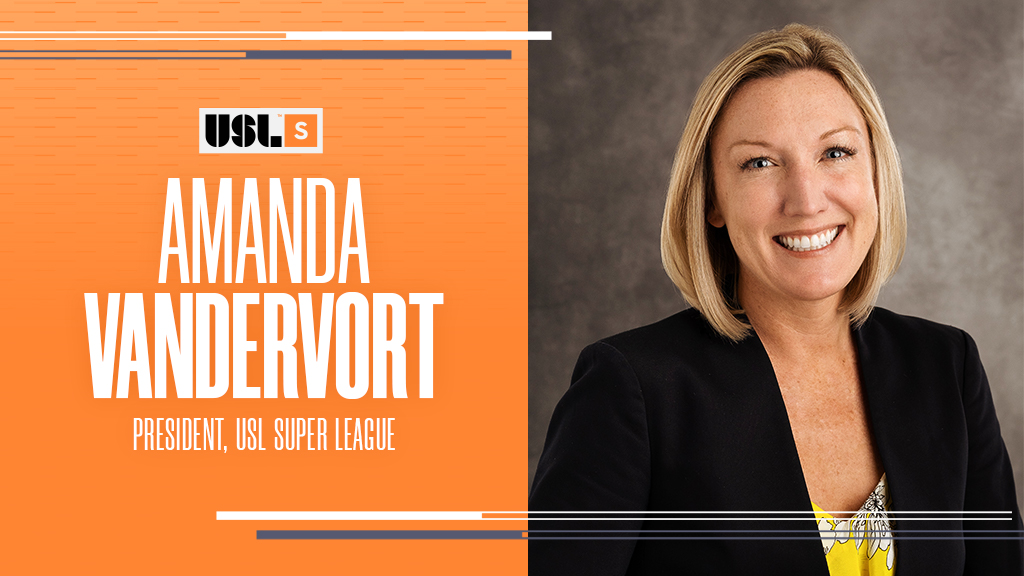 Amanda Vandervort will be the first president of the USL Super League, the professional second division women’s soccer league slated to kick off in 2023. The United Soccer League made the formal announcement on Tuesday morning.

A sports executive with more than 20 years of experience across all levels of women’s and men’s soccer, Vandervort brings business acumen, leadership skills and industry relationships to the USL Super League and USL’s burgeoning women’s soccer pathway. Vandervort will lead all aspects of the USL’s youth-to-professional women’s soccer pathway and will work with communities, players, clubs and owners to build the USL Super League into a financially sustainable, globally recognized sports entity.

“It’s such an exciting privilege to be in this position,” Vandervort said. “Together we’ll build a competitive environment for elite women players, coaches and referees at the professional level. We’ll create opportunities for fans to experience the women’s game in their local communities and provide value to those investing in this high-growth platform. I’m excited to be helping the USL realize the Super League’s potential and drive the women’s game forward.”

The USL Super League will apply for Division II sanctioning from U.S. Soccer in the coming months for its expected 2023 launch. The USL women’s pathway now includes the Super League, the pre-professional W League, the USL Academy and USL Super Y League.

Vandervort joins USL after serving as chief women’s football officer of FIFPRO, the global player’s association, where she directed strategy, policy, and stakeholder relations. Prior to joining FIFPRO, she worked at Major League Soccer as vice president of CRM and Social Media and then as vice president of Fan Engagement. Originally from Tucson, Arizona, Vandervort played at the University of Wyoming and later coached New York University’s women’s soccer program for four years.

“We are delighted to welcome Amanda to the USL executive team as USL Super League President,” said USL Chief Executive Officer Alec Papadakis. “Amanda is one of the most accomplished soccer executives in the United States. Her expertise includes global women’s soccer matters, partnerships, marketing, league expansion, club strategy, grassroots initiatives, and business development. Just as importantly, Amanda’s perspective as a former player and coach aligns with the culture of our organization and that of our other senior executives.”