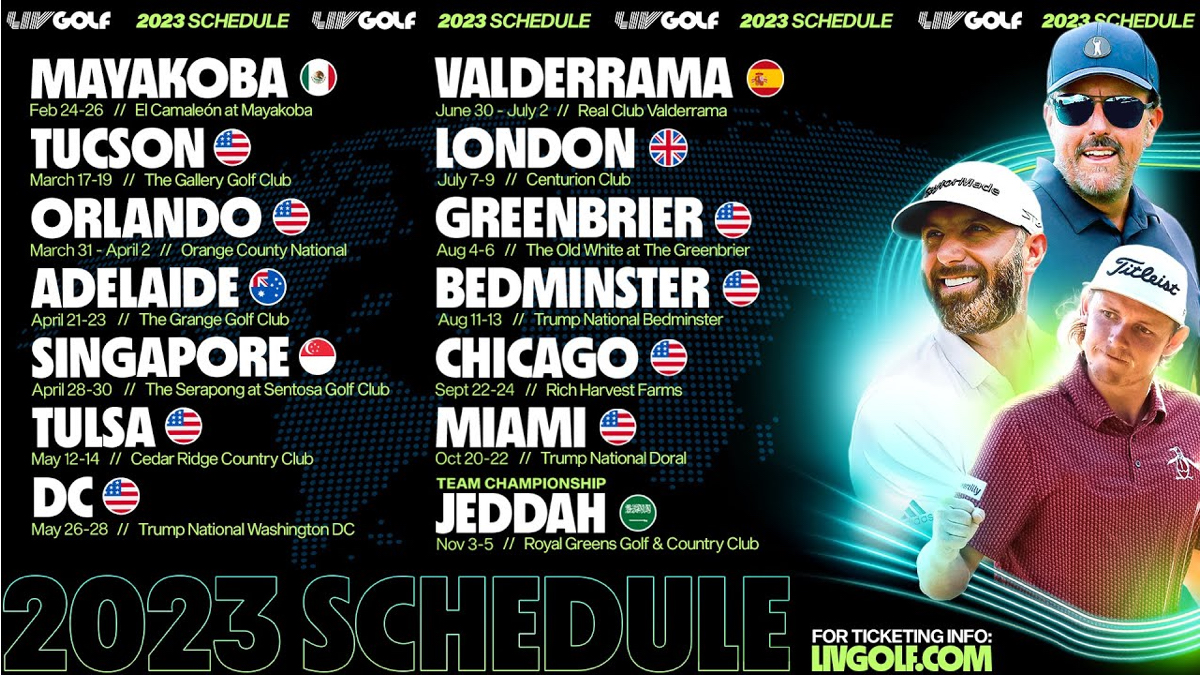 LIV Golf has released its 14-event schedule for 2023, including eight tournaments to be played in the United States.

After kicking off the season at Mayakoba’s El Camaleón Golf Course in Mexico (February 24–26), LIV will move to The Gallery Golf Club in Tucson, Arizona, March 17–19 and then onto Orange County National in Orlando from March 31–April 2.

After stops at Grange Golf Club in Adelaide, Australia (April 21–23) and Sentosa Golf Club in Singapore (April 28–30), LIV returns to the U.S. with events at Cedar Ridge Country Club in Tulsa, Oklahoma, May 12–14 and Trump National Washington D.C. on May 26–28.

Two stops in Spain and United Kingdom over the summer give way to four straight events in the U.S. as the season winds down.

The Old White at The Greenbrier in West Virginia hosts from August 4–6, then Trump National Bedminster in New Jersey takes center stage August 11–13. The final two U.S. events in 2023 take place at Rich Harvest Farms in Chicago on September 22–24, and Trump National Doral in Miami October 20–22. The LIV Team Championship will be in Saudi Arabia November 3–5.

“We received tremendous feedback from fans throughout our beta-test year, with one resounding theme: LIV Golf’s team format, innovations, and festival-like events are delivering a one-of-a-kind golf experience,” said LIV Golf Chief Executive Officer and Commissioner Greg Norman. “Last year helped lay the foundation for the future of golf at extraordinary courses that have hosted some of the world’s top competitions. LIV Golf’s schedule features fantastic venues and championship sites for our official league launch that will carry the sport into a new era.”

The courses on the 2023 LIV schedule have collectively hosted more than 200 professional, collegiate and amateur events, including tournaments such as the Ryder Cup, Solheim Cup, Senior PGA Championship and U.S. Women’s Open.

The South Course at The Gallery Golf Club was the venue for the Match Play Championship in 2007, with current LIV Golf member Henrik Stenson winning. The South Course was nominated as one of Golf Digest’s 100 Best.

The championship layout at Cedar Ridge Country Club in Broken Arrow was created by a group of local businessmen in the late 1960s. The club has hosted many state championships and national qualifying tournaments, and its most notable event was the 1983 U.S. Women’s Open won by Jan Stephenson.

“Cedar Ridge is excited to host LIV Golf’s Oklahoma debut in Tulsa,” said Billy Lowry, club president at Cedar Ridge. “Oklahoma has a rich history of hosting major professional events at many venues across the state. Cedar Ridge has been a part of that history and we look forward to hosting professional golf again. We are proud to have the opportunity to welcome 48 of the world’s best players to battle it out at Cedar Ridge.”

The Old White is the signature course at The Greenbrier. It is a familiar layout for many players, having hosted a professional event from 2010-19. Among the list of winners are current LIV members Joaquin Niemann and Kevin Na. Named after the popular hotel on the grounds, The Old White opened for play in 1914 as The Greenbrier’s first 18-hole course.