Pan Am Games Show Off Toronto

The greater Toronto area kicked off the beginning of the Pan American Games with an impressive display of competition and pageantry that included an Opening Ceremony choreographed by Cirque de Soleil and a chance for the region to show off some of the legacy venues and infrastructure the event will leave behind. As our July cover story details, the event, combined with the Parapan Am Games, marks the largest sports investment that the province of Ontario has ever undertaken. At an opening press conference, the chairman of Toronto 2015, David Peterson, suggested the region may again bid for the Olympic Summer Games if the Pan Am Games come off well. Based on the first weekend, the event was off to a strong start.

One of the many legacies of the games comes through transportation in the form of the UP Express train that connects Toronto’s Pearson Airport with downtown’s Union Station. The project set the Pan Am Games as a goal for completion and the system provided easy access for fans at all times of day, both to and from the airport. 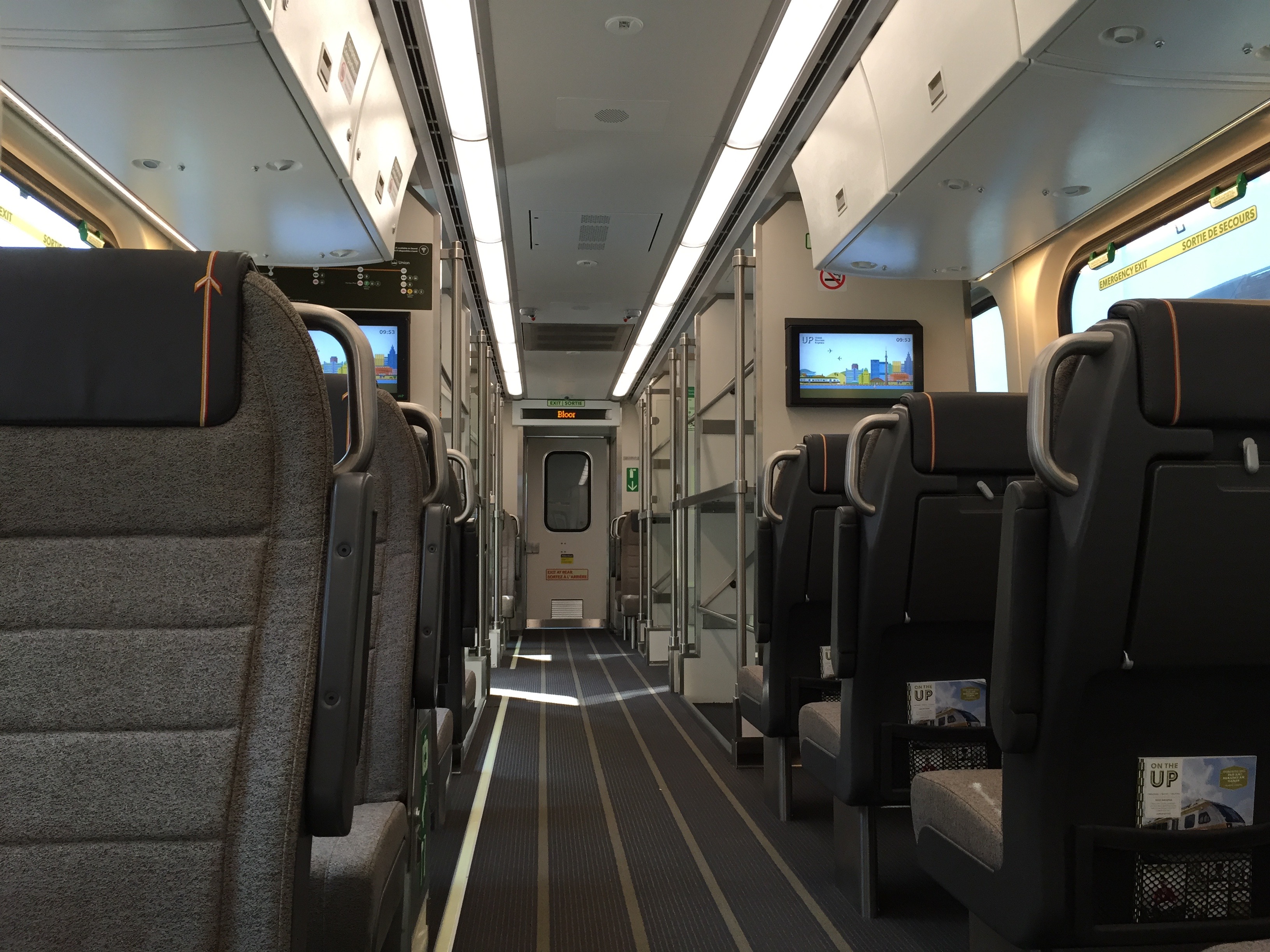 The Opening Ceremony at Rogers Centre (renamed Pan Am Ceremonies Venue for the competition) was a several-hours affair with a backstory detailing the history of Canada. With Cirque de Soleil behind the production, it came with all the pageantry and artistic creativity you would expect. 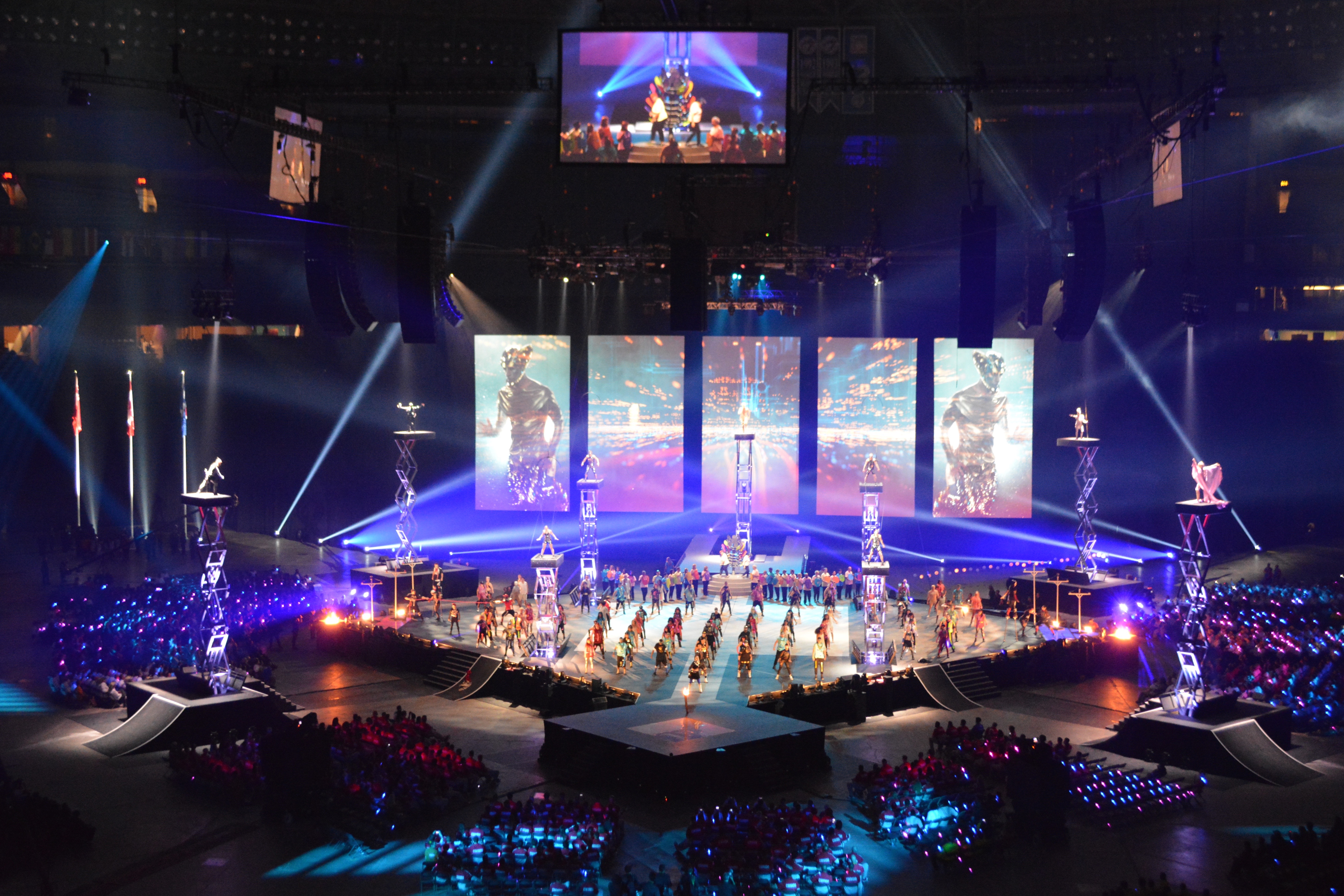 Among the dignitaries in attendance was International Olympic Committee President Thomas Bach. The ceremony also featured an appropriate tribute to Mario Vázquez Raña, who died in February and had served the last 40 years as president of the Pan American Sports Organization. 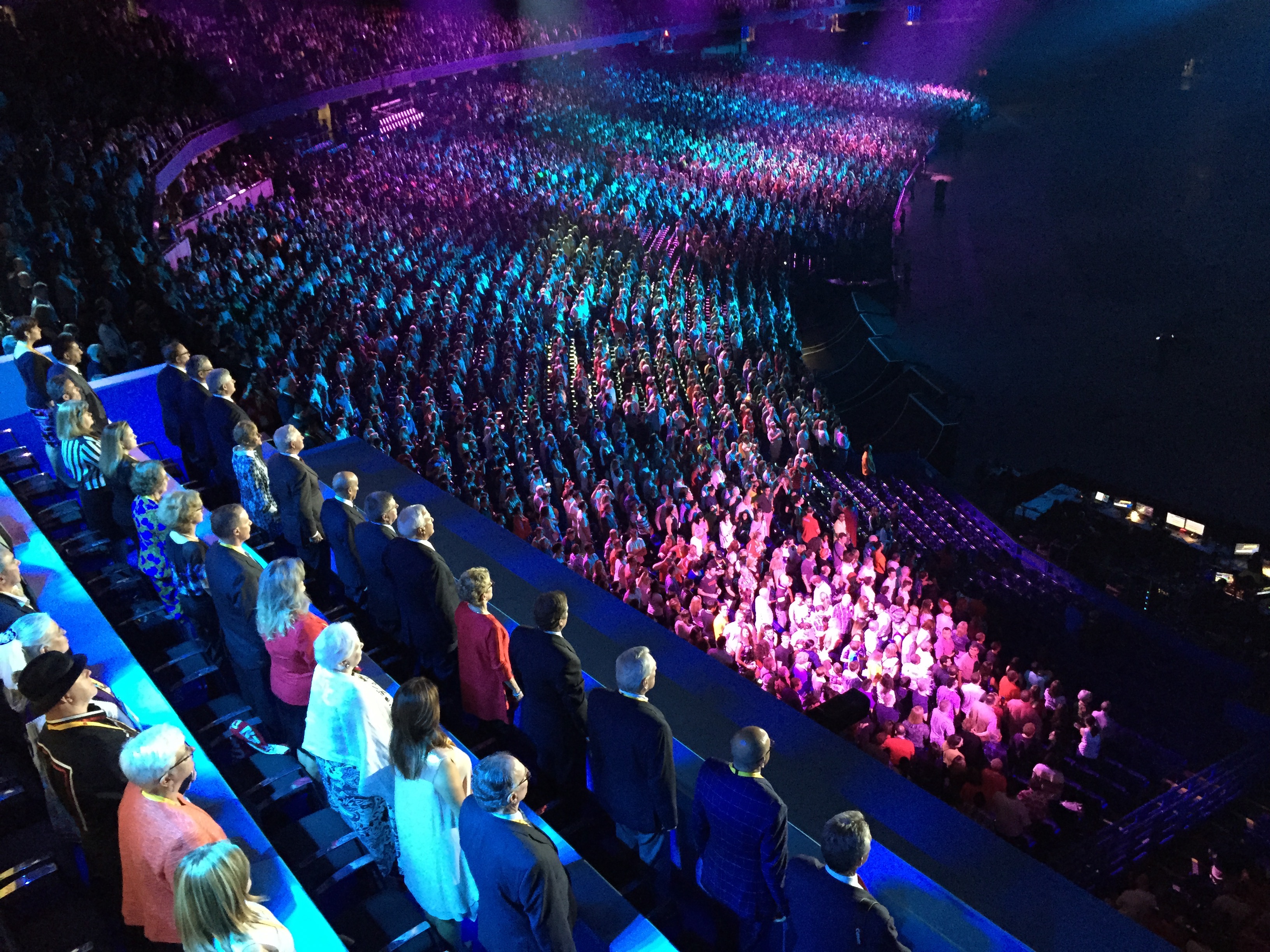 As for the ceremony itself, the largest applause came when Team Canada entered the Parade of Nations. 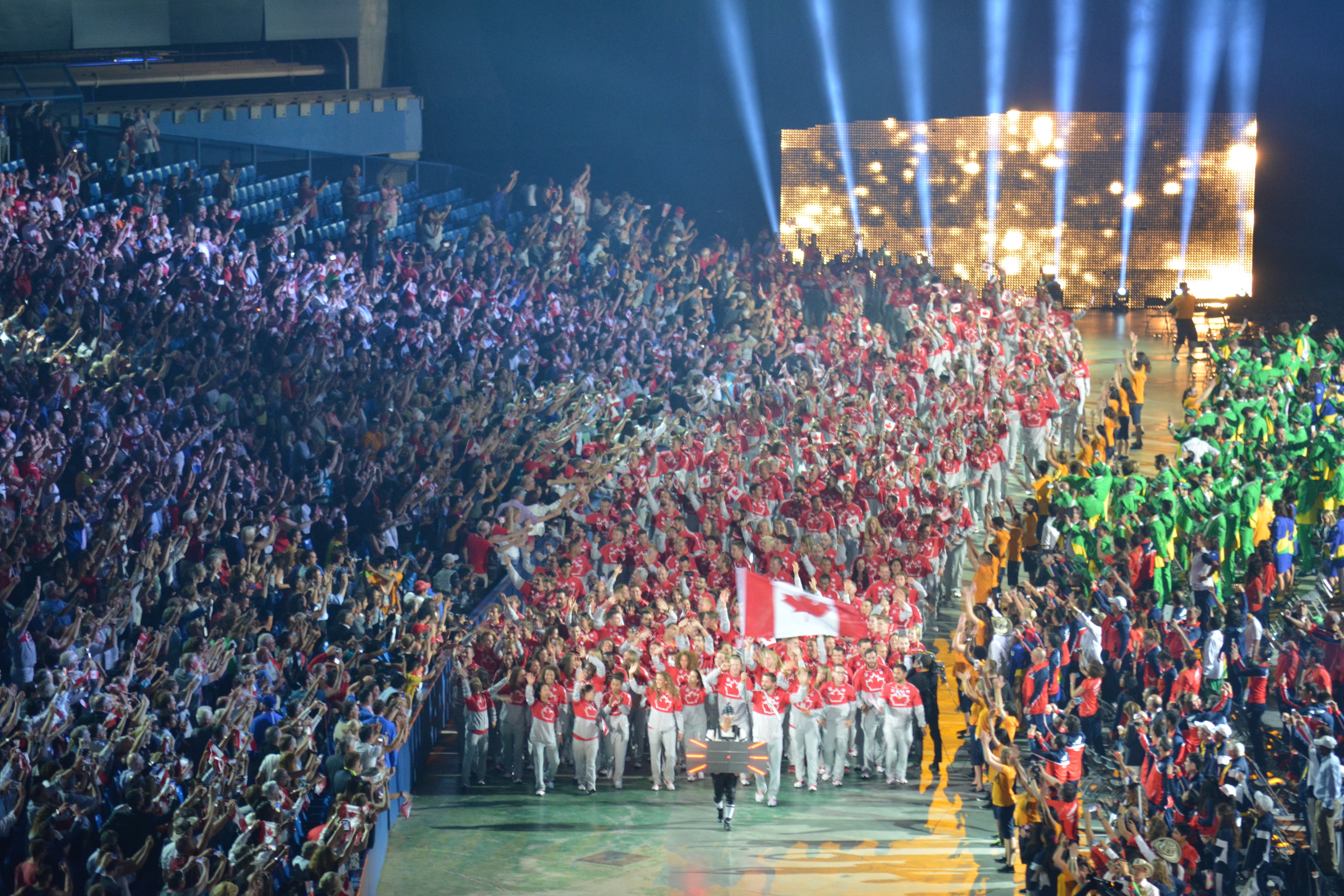 Among the others receiving loud ovations were a team of BMX riders who did tricks amid the seated athletes on the stadium floor, and hockey legend Bobby Orr, who carried the IOC flag into the stadium. One downside, though, for those in attendance: The most dramatic part of the evening came at the end when NBA star (and Canadian) Steve Nash took the torch relay, ran outside the venue and lit the Pan Am Games cauldron, which sits just outside the stadium at the base of the CN Tower. From there, an impressive fireworks show began off the adjacent tower. But attendees at the ceremony had to watch the spectacle from the smallish screens behind the main stage, which was set up in the equivalent of the outfield at the Toronto Blue Jays’ home stadium. With Rogers Centre having a retractable roof, it was a lost opportunity to open the roof at the end of the ceremony for those inside to watch the amazing display live just steps away. It would have been quite dramatic, but proved anticlimatic for anyone who paid for a ticket inside. Nonetheless, crowds gathered outside following the ceremony to take photos of themselves by the flame. 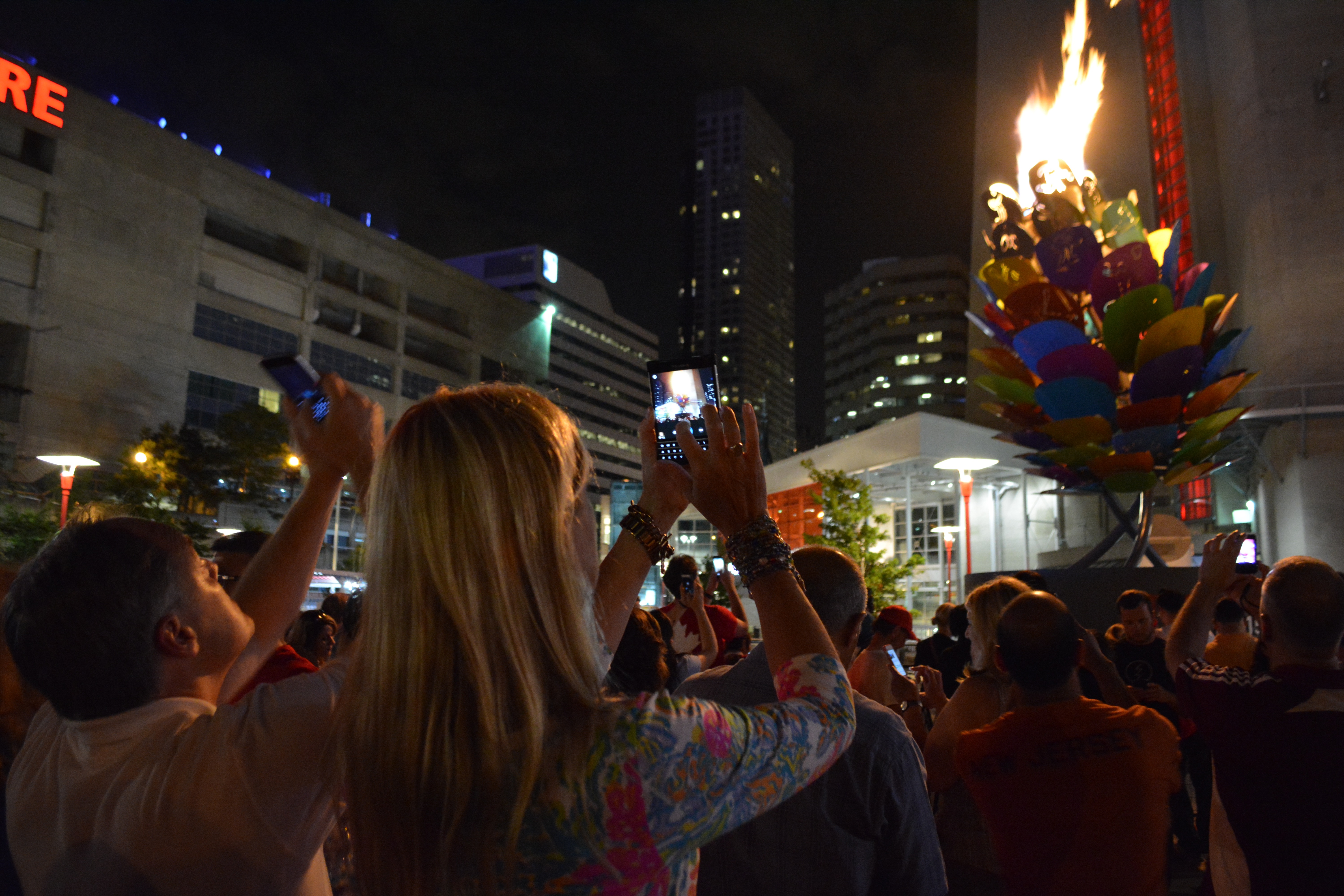 The first full day of competition saw more than a dozen sports at play. The city’s Exhibition Centre area (known as Pan Am Park for the games) includes a number of venues, with the main stadium that normally serves as home to Toronto FC hosting rugby sevens, which is poised to make its Olympics debut in 2016. The venue saw sparse crowds for qualifiers but a full house for the gold medal matches the next evening. With Canada winning gold in the men’s and women’s events, it was a festive scene. The echoes of the crowd noise and feet slamming could be heard across the Pan Am Park. 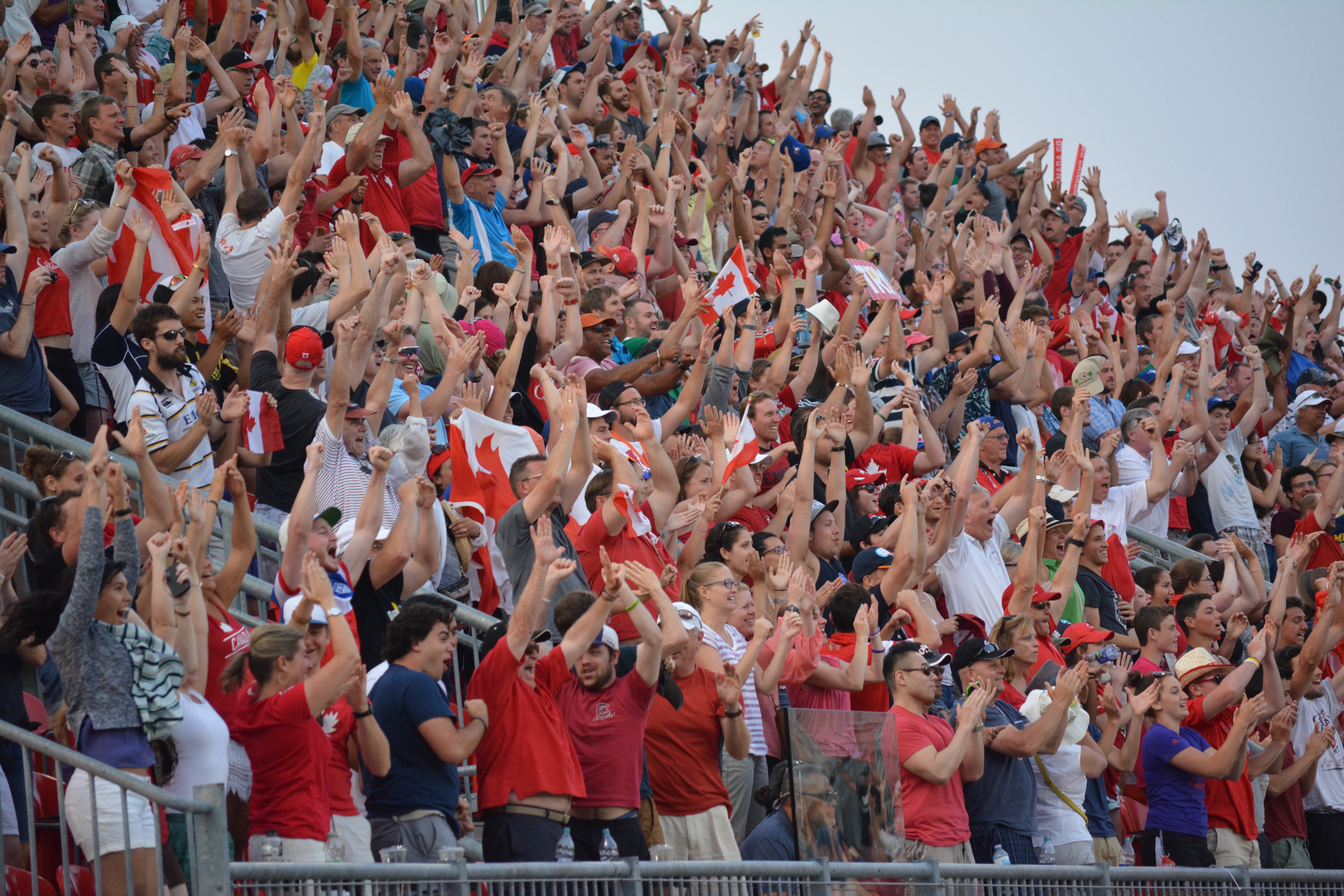 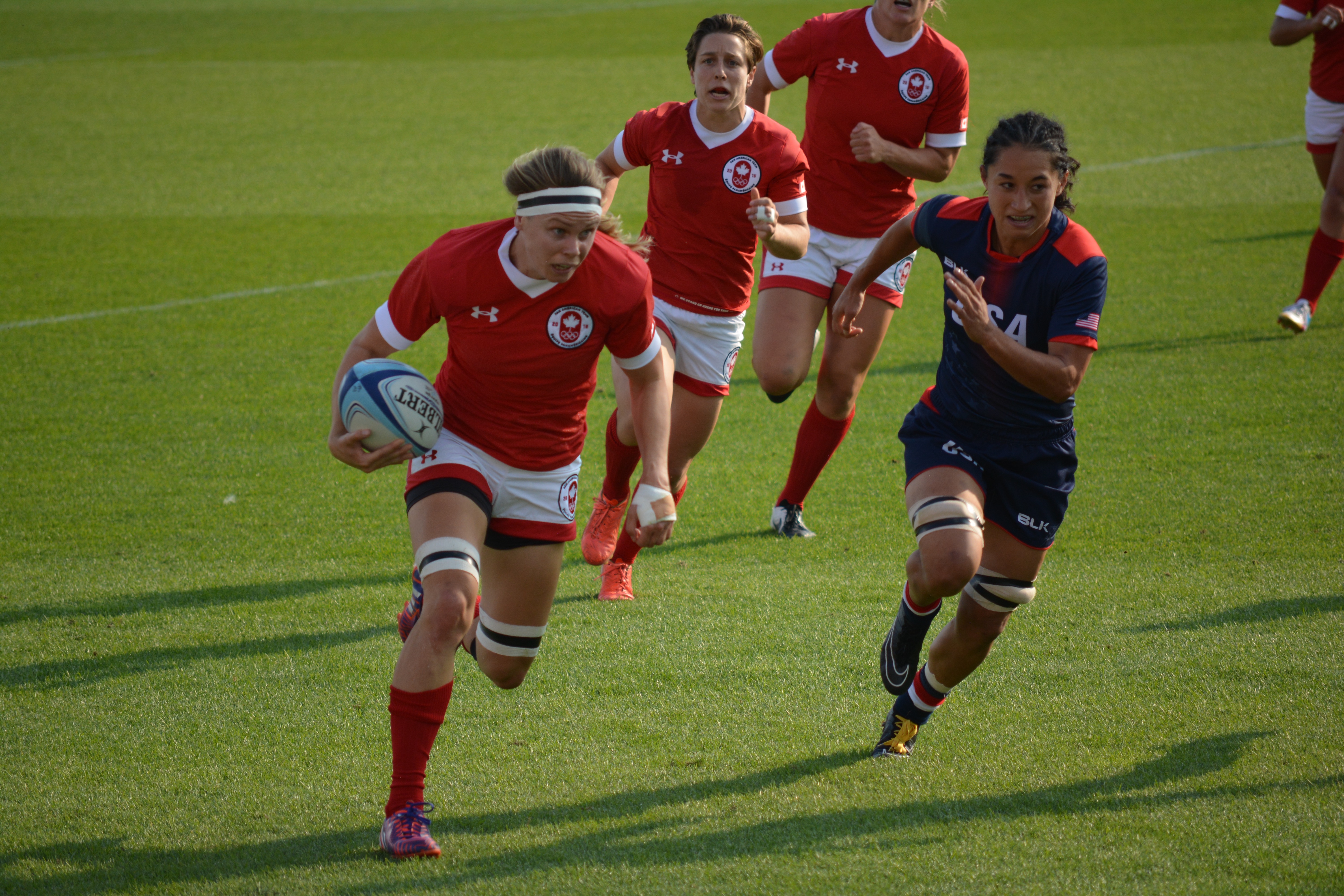 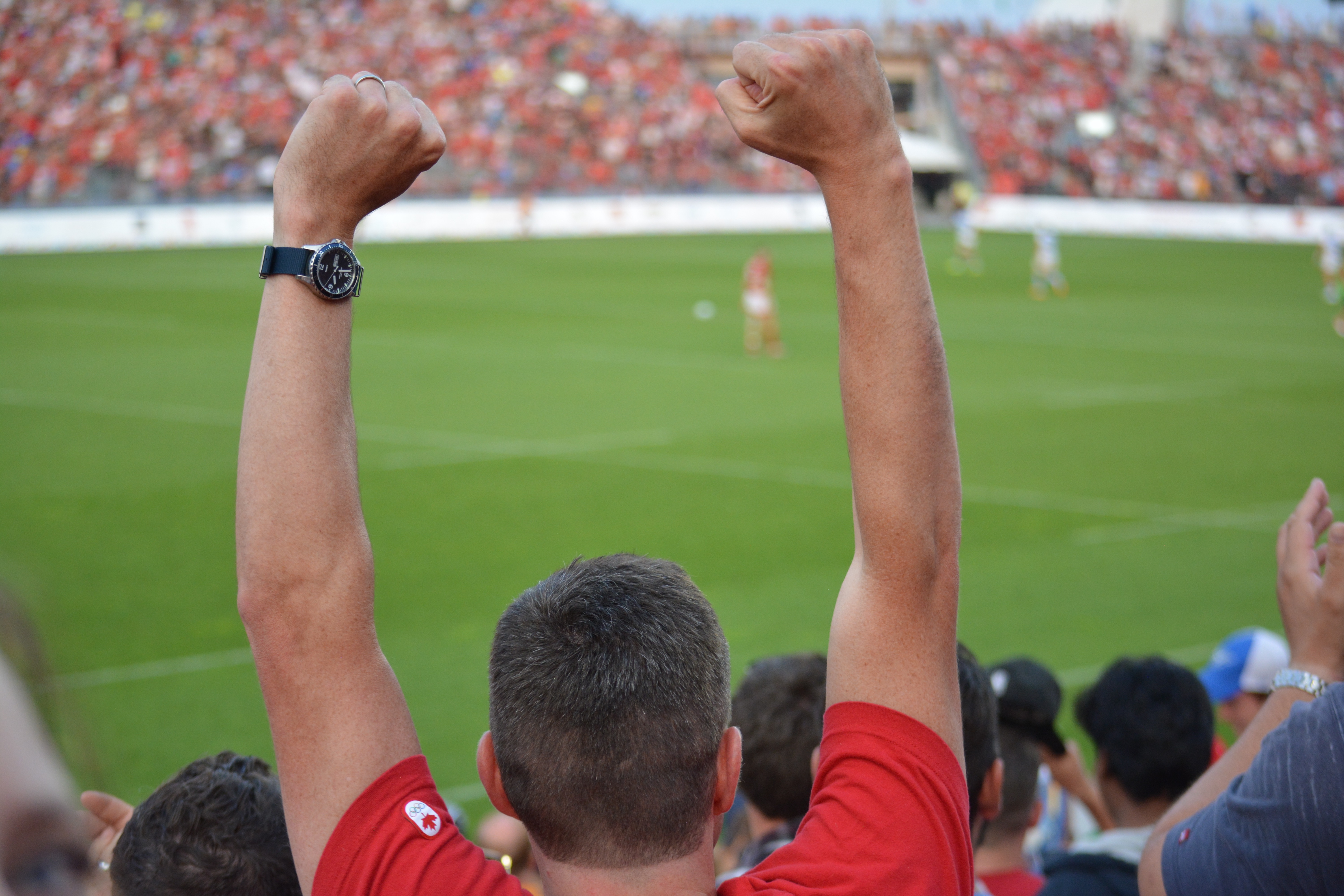 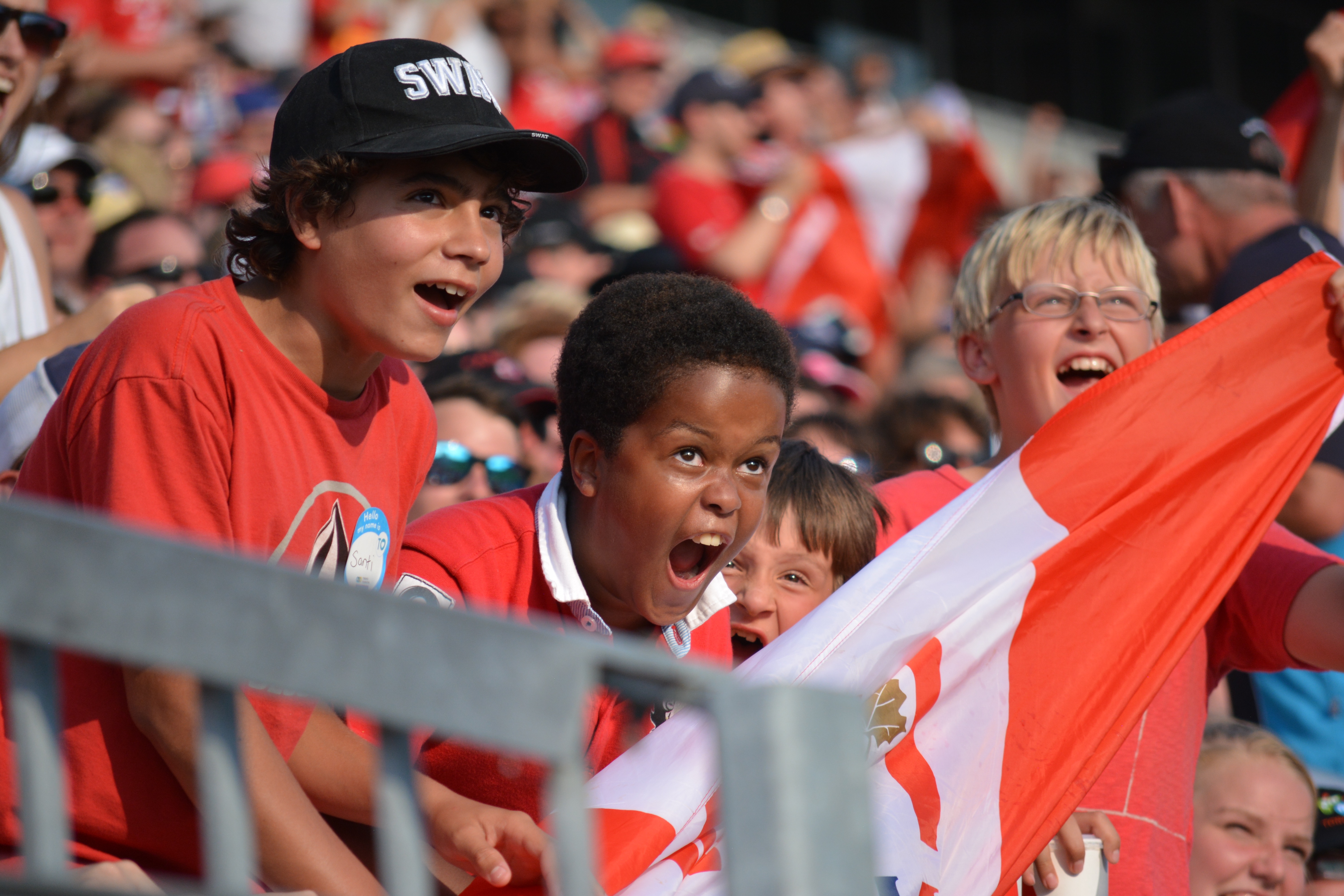 Also on site at the Exhibition Centre was the Ricoh Coliseum, which was an ideal venue to host gymnastics. 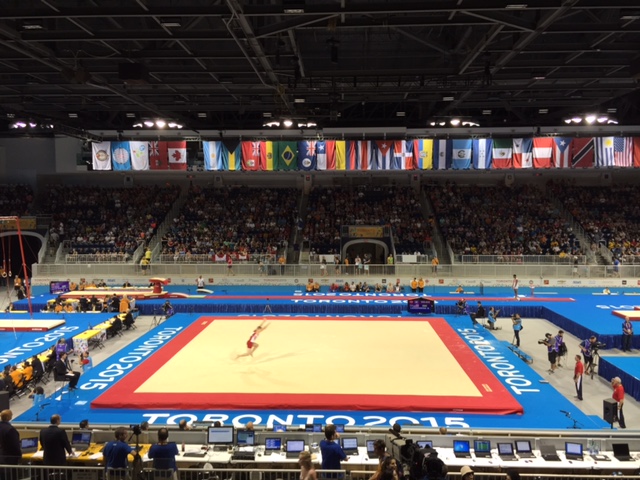 And the Exhibition Centre itself is serving as the workhorse of the games. The venue will be hosting the media center, as well as indoor volleyball, handball and racquetball.

In addition, two other events held there early in the games were squash and roller sports figure skating, two sports that have just missed out in recent years on being added to the Olympic program. Both were compelling in the convention center, especially squash, whose glass courts allowed spectators to view the action on all sides. 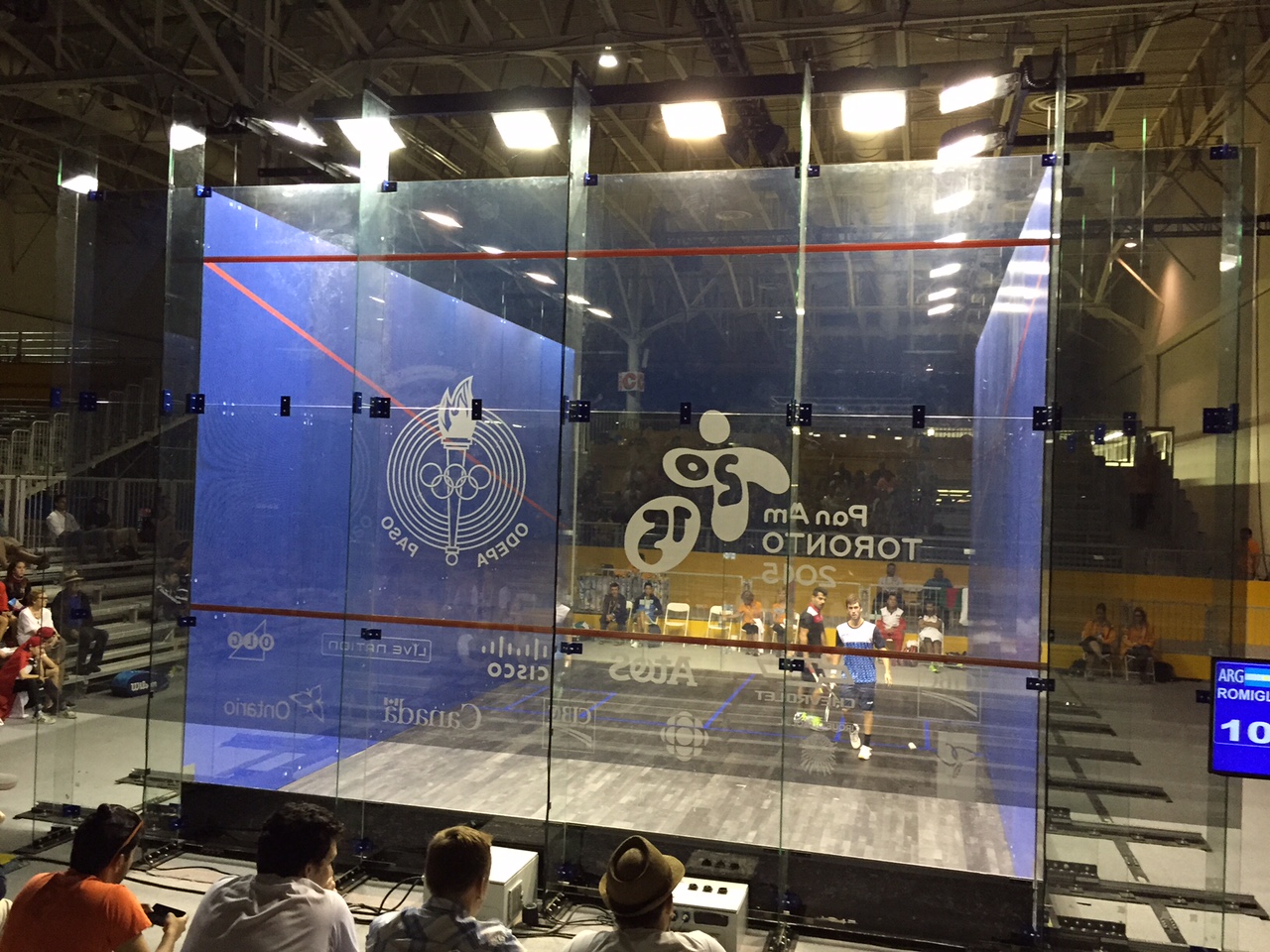 But the center also had traditional squash courts inside as well, which attracted their own crowds that crammed in to get views the traditional way—from the back of the court. From a spectator experience, the glass cubes were much more ideal. 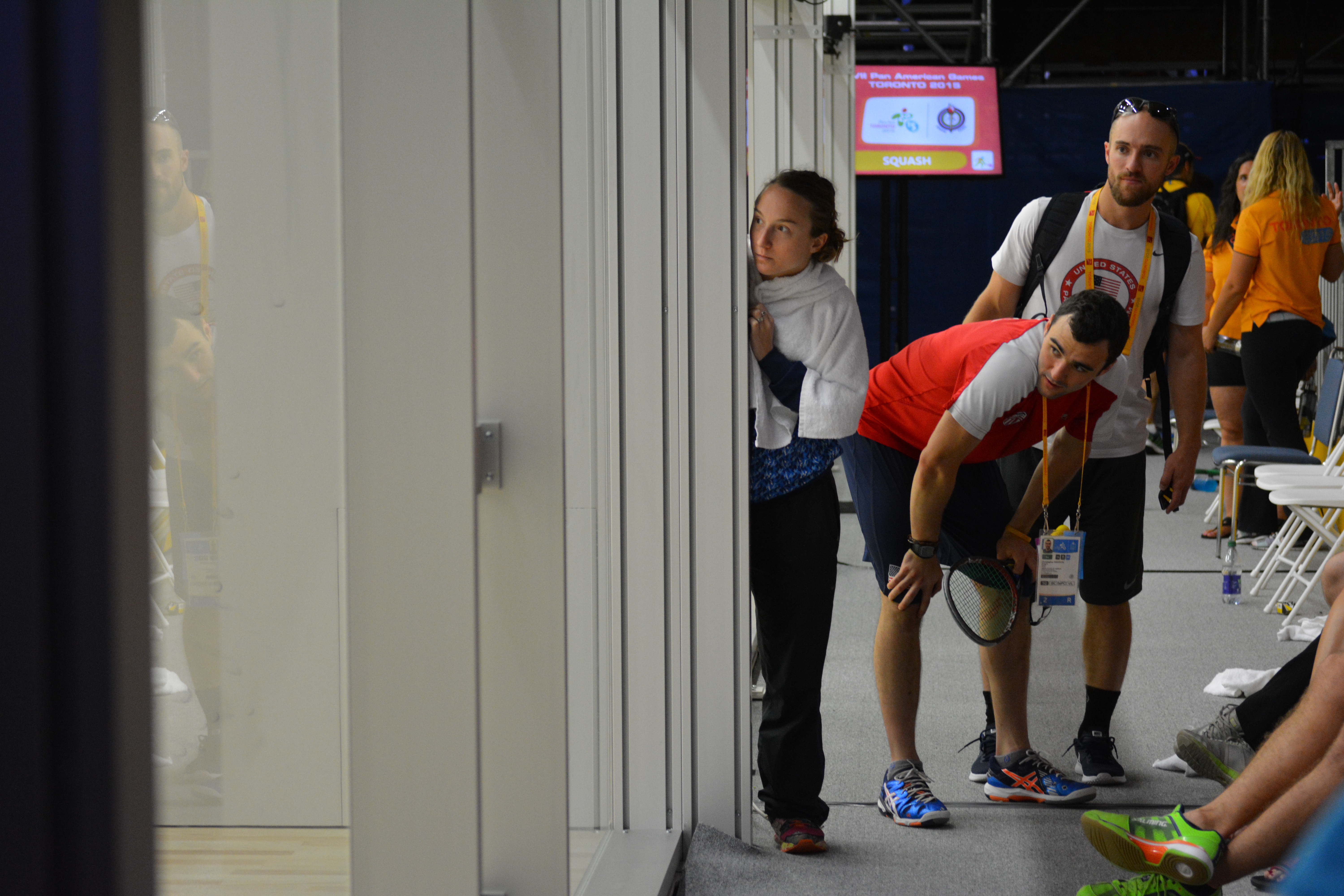 As for roller sports, stands were full for the long-form program finals as skaters performed their routines on a temporary floor with temporary stands. 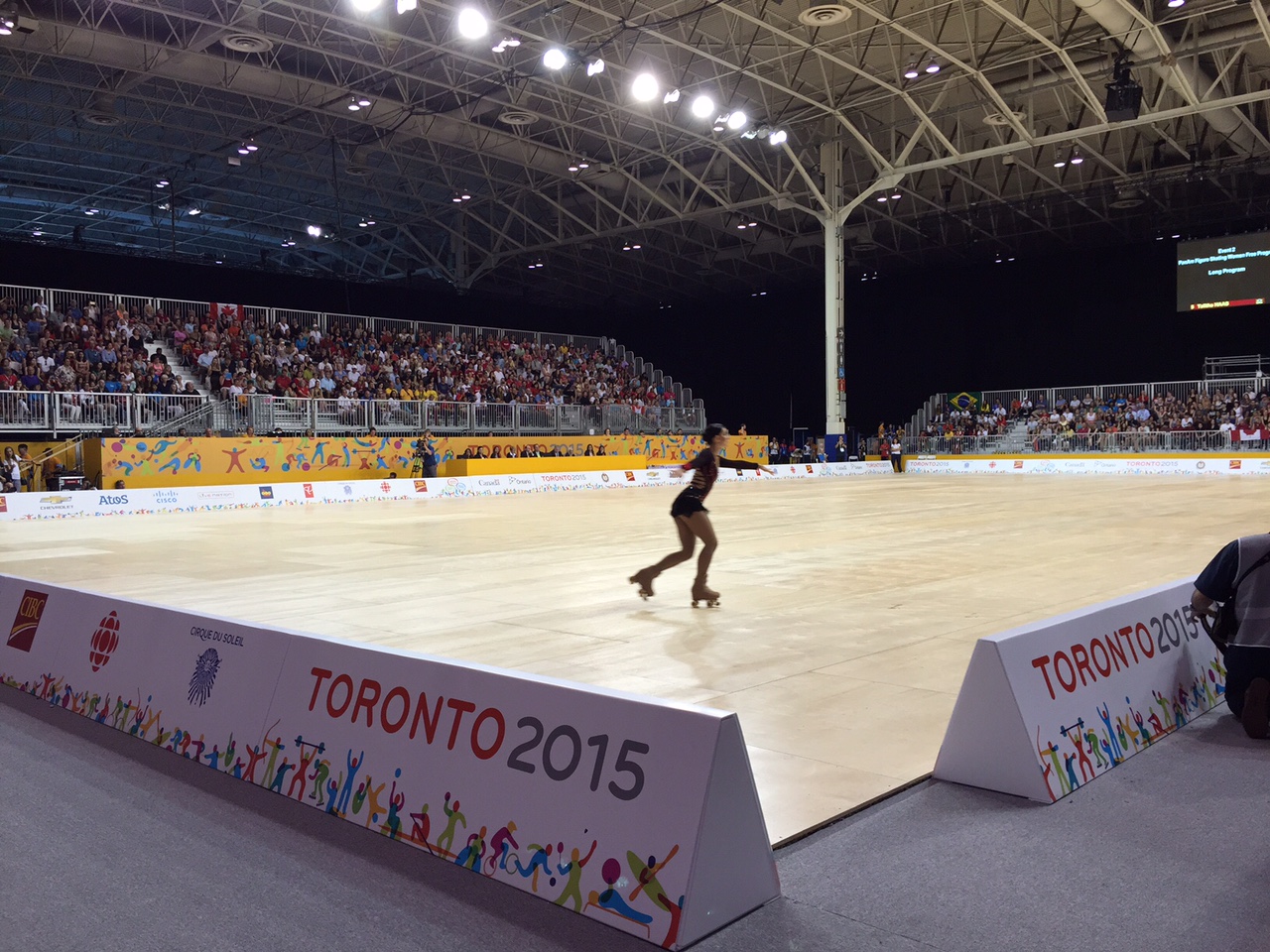 Outside of downtown Toronto, other venues are hosting as well. About 45 minutes east of downtown, the Pan Am Sports Centre is another legacy venue, hosting aquatic sports. The early diving competition was packed and transportation from downtown worked well. The venue appears to be a positive addition to Toronto’s sports landscape and could help the region if it does indeed proceed with an Olympics bid down the road. 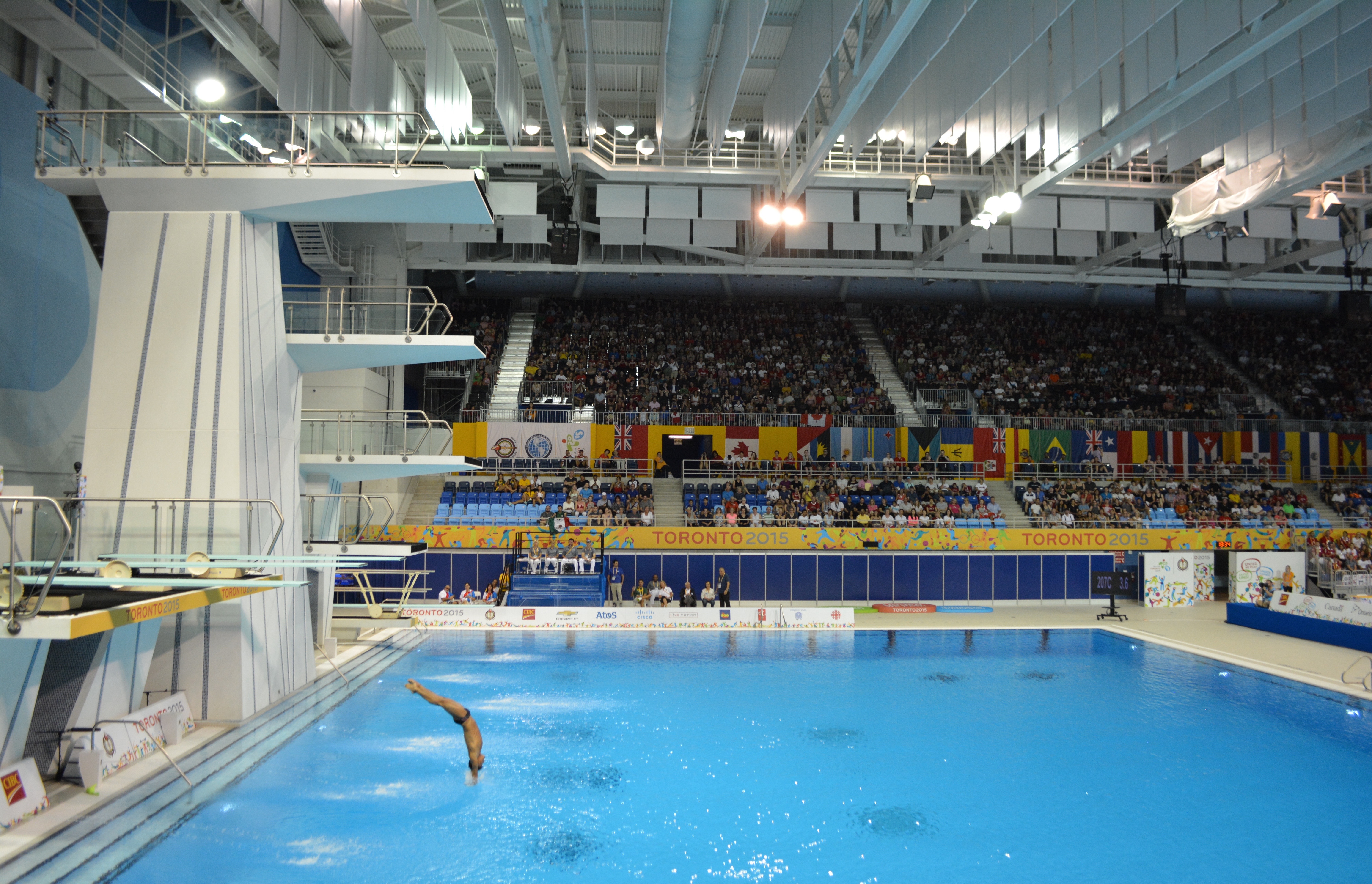 But no report on the Pan Am Games could be complete without a reference to Pachi the Porcupine. The ever-present mascot’s image is plastered across town, from the many megastores for merchandise to the tops of bus shelters, where his presence can be a bit alarming if you’re not prepared for it. 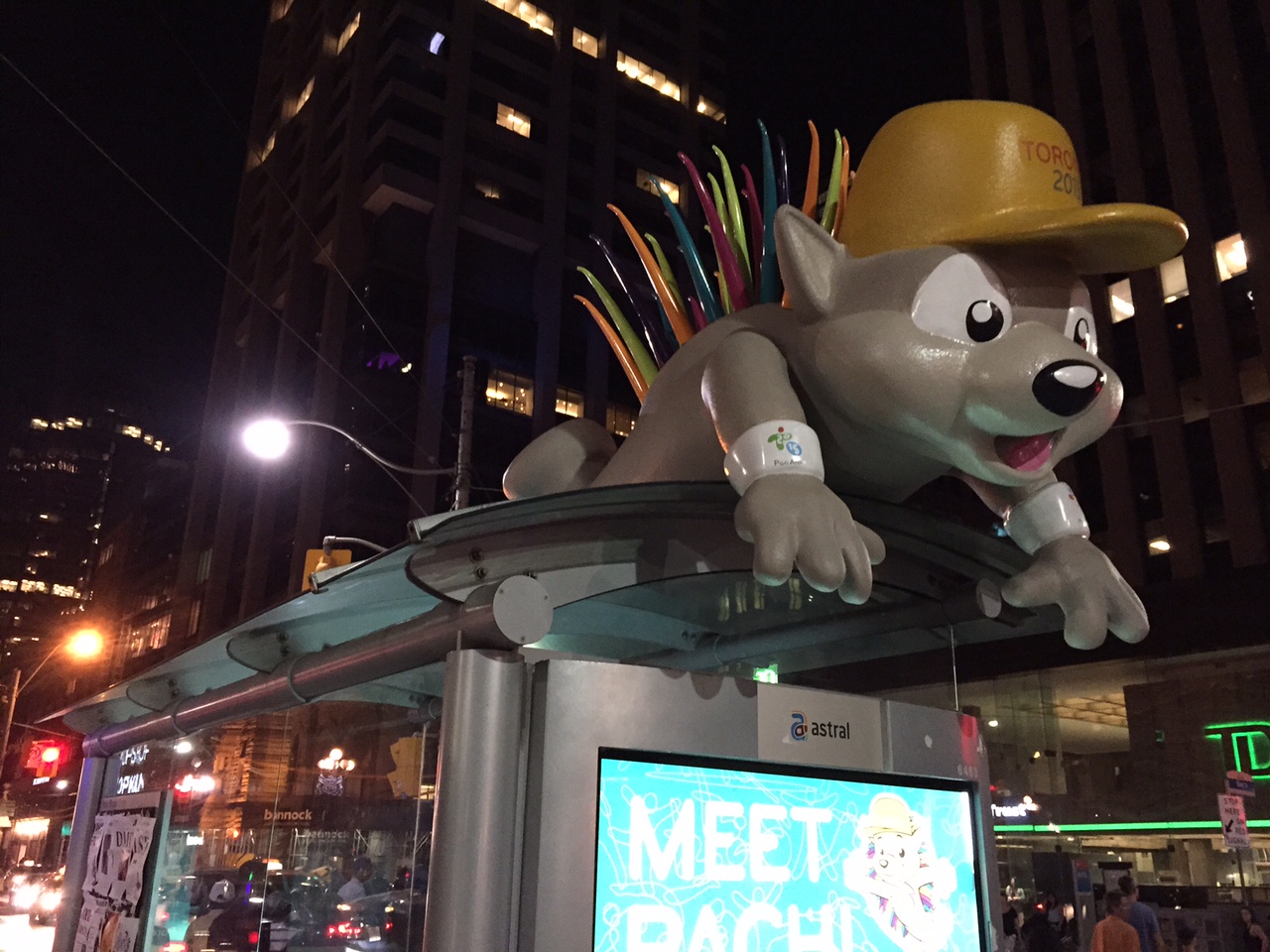 While Pachi plush dolls may prove irresistible for fans with children, organizers have ambitiously priced the mementos at stores. A medium-sized Pachi retails for $51 in Canadian dollars (about $40 in U.S. dollars). 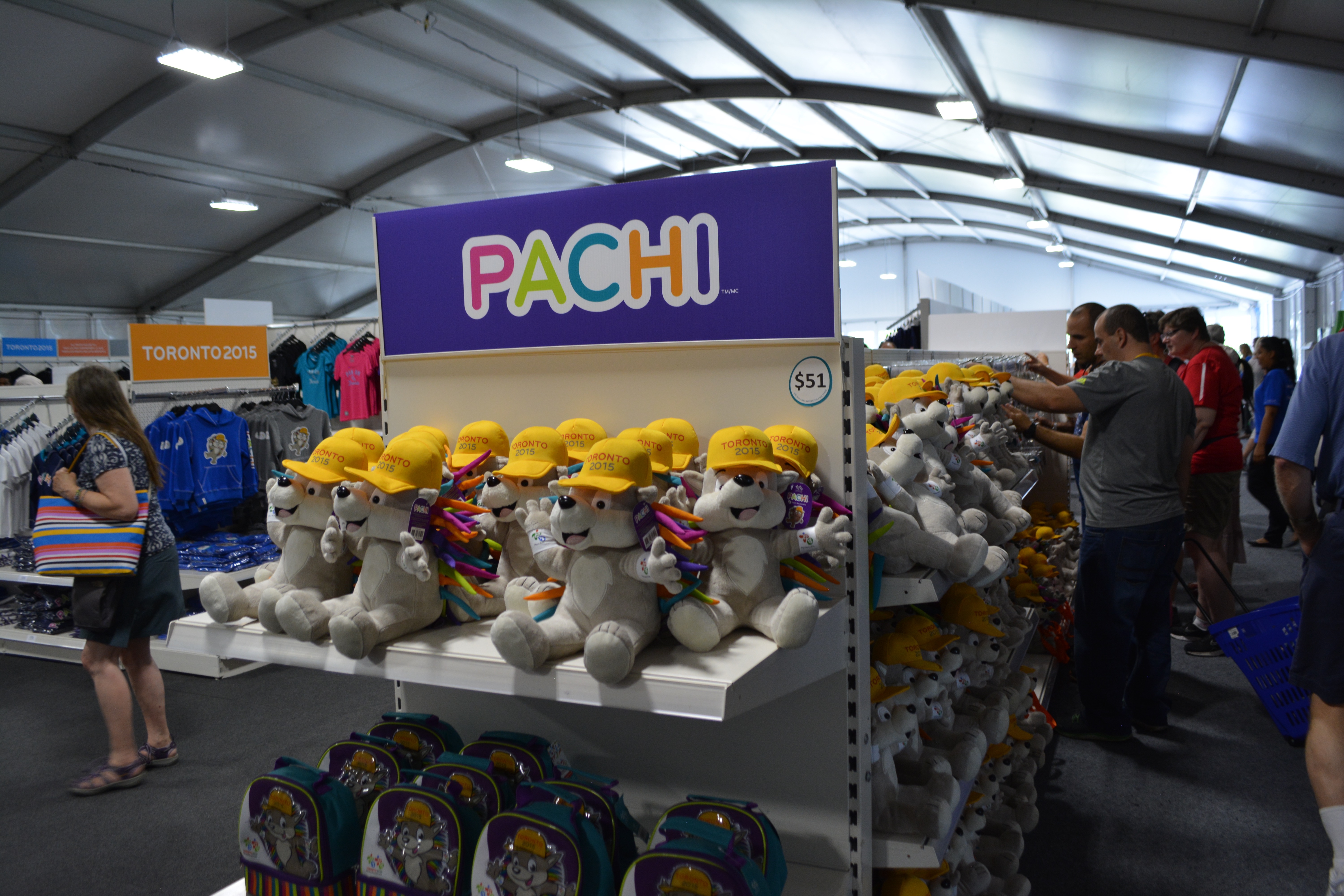 One last thought on the Pan Am Games. In the July issue of SportsTravel, our “Winners and Losers” columnist Bob Latham shared his thoughts about his concern over mascots such as Pachi and how necessary they are (or not) at events. But in one of life’s great ironies, Latham, who serves as chair of USA Rugby and vice-president of the Pan American Rugby Association, came face to face with Pachi during the medal ceremony for rugby sevens. As part of the official delegation, Latham was charged with handing out a prize to each member of the three medaling men’s teams. That prize? A stuffed Pachi. With 12 players per team, that was a lot of Pachis. The prickly porcupine (whose 41 quills represent the 41 Pan American nations) may have finally won our columnist over. 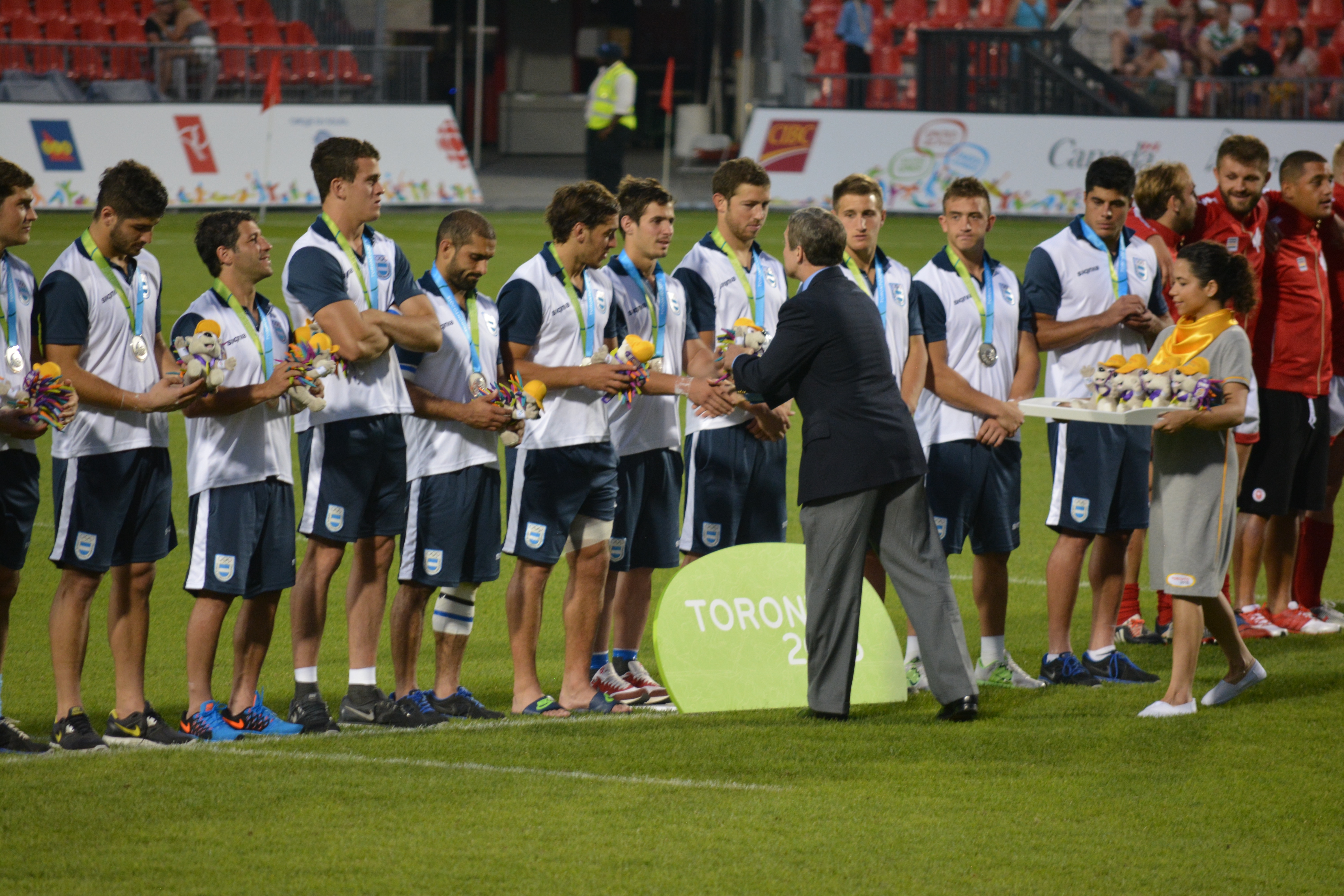