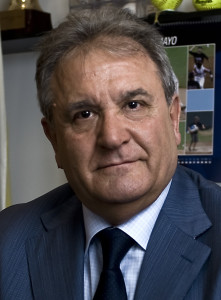 The inaugural congress of the World Baseball Softball Confederation has elected Italy’s Riccardo Fraccari to lead the international governing body as its first president. Fraccari helped form and lead the WBSC since 2012 as an interim co-president, alongside softball partner Don Porter. Fraccari will serve as the lone WBSC president for an initial seven-year term that extends to 2021.

“I am tremendously honored to be entrusted by my peers to lead the WBSC,” Fraccari said. “This role comes with an unprecedented level of responsibility and commitment—it’s an exciting and historic time, a ‘new era,’ for baseball and softball.”

The WBSC Congress, which took place in Hammamet, Tunisia, also elected its first executive board, formalizing a complex merger of baseball’s and softball’s two independent international sport federations—a process that took nearly four years of talks, legal consultations and planning. Board members include International Softball Federation President Dale McMann, who will serve as executive vice-president for softball, and USA Baseball Executive Director and CEO Paul Seiler, who will serve as an at-large member for baseball.

The initial election term, which applies to the entire WBSC Executive Board, was extended beyond 2020 by the Congress ahead of the elections, to better guarantee the new president and board sufficient time to draft and implement a mid- and long-term growth plan for the international federation, including a goal of returning the sports to the Olympic Summer Games. Following the next round of elections in 2021, voting will take place every four years, and always in the year following the summer Olympic Games.

The WBSC Congress also paid tribute to longtime softball leader Porter, who steps down after more than 40 years of service to softball during which time he helped construct greater pathways for women to be better represented in sport and helped softball become an Olympic sport (1996-2008).