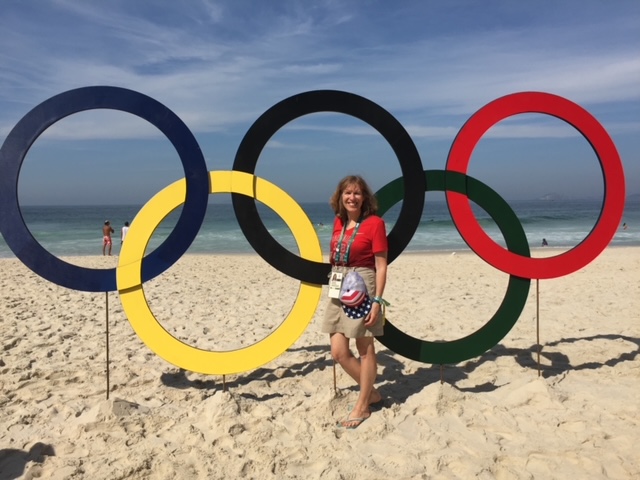 It has been a great honor to have attended every Olympic Games since the 1984 Sarajevo Winter Olympics as either a volunteer or researcher. Tokyo 2020 was to be my 20th consecutive Games until COVID-19. I was obviously devastated to be cut from the accredited list in June, but what I’ve learned is golden.

As the Opening Ceremony commenced, I watched on television with a heavy heart. These were the first ceremonies I’ve missed in 37 years. Unlike the in-person experience, I was neither too hot nor cold and could actually understand the symbolism of the presentation thanks to the NBC commentators. The close-up view of performers and the video content was also enjoyable.  Over the years, the Opening Ceremony has been produced more for television than in-person viewing. In PyeongChang, the drones could not fly during the actual ceremonies due to safety concerns, but pre-recorded footage was used and it looked amazing on television.

As the Opening Ceremony commenced, I watched on television with a heavy heart. These were the first ceremonies I’ve missed in 37 years.

Considering that most of my research over the years has been on spectator motivations and consumer behavior, I’ve often stated that you need to be “healthy and wealthy” to attend an Olympic Games. One of the strange things that I miss is the challenge of figuring out how to travel to and eventually enter the different Olympic venues. You typically have at least a mile walk from the public transportation depot. In Tokyo, there is no purposively built Olympic Park with multiple venues in one security zone, so the challenge would have been even greater. For these Games, I wake-up and watch with a click of the button and then fall asleep watching in the evening. I am definitely not getting my average 40,000 steps as I would if I was at the Games.

Although concession food is not always a treat, I miss the adventure of figuring out the different options and trying new things. In Athens in 2004, I was happy to wait 30 or more minutes for freshly barbecued souvlaki. It was not the most efficient concession food but was definitely authentic. In Beijing in 2008, I lived on Snicker bars for the first few days until I figured out how to order something different. I hear in Tokyo, the hot noodle option is not so popular considering the heat.

I had the opportunity to visit Tokyo in the fall of 2019 but there is nothing like seeing a city light up during an Olympic Games and become “Olympified” as we fondly refer to all the venue overlays and additional branding. To reduce public gatherings in Tokyo, city celebrations were canceled and there seems to be limited photo opportunities with the rings or mascot compared to previous games. What I also do not get to experience on television is the in-venue presentations of athlete introductions, music and entertainment. Each host country typically inserts some cultural flare.

Another benefit of attending Olympic Games is the chance to learn and experience new best practices in event management including iris recognition entry and robot half-time performers. Instead, I am benefiting from advanced broadcast technology of multi-camera replay systems and 3D Athlete Tracking.

What I miss most, however, is meeting people from around the world and the shared comradery between all those be it in the stands, public transportation, or bars. My family is wonderful, but there is nothing like experiencing the Games with thousands of strangers, hearing the international cheers and watching the roller coaster of emotions. Interestingly, I have cried more in both joy and sorrow watching these Games on television. Perhaps I feel closer to the athletes through the close camera eye and interviews. Images of athlete parents and loved ones who have given so much but can’t be in Tokyo to share in the experience is a definite waterfall trigger.

The silver lining of not being in Tokyo is the realization of just how much I love the Olympic Games and the desire to be in Beijing in 2022 to continue the tradition. As an Olympic scholar, I know all too well the shortfalls of Olympic sport organizations be it the International Olympic Committee, international federations, Nationals Olympic Committees, national governing bodies or the host city organizing committee, but what most people do not understand or appreciate is that for the most part the Olympic Movement is run by volunteers around the world. The fact that every two years 205 countries come together to celebrate excellence, friendship and respect is a positive thing in a world that is often divisive.

Lisa Delpy Neirotti, Ph.D., is an associate professor and director of the Sports Management Programs at The George Washington University. She serves as the director of the BBA, MBA, and MS in sport management programs as well as the Sport Philanthropy Executive Certificate, Certified Sports Administrator and the GW Green Sports Scorecard. Neirotti co-authored the “Ultimate Guide to Sport Marketing.” She also consults with sport organizations and sponsors and conducts numerous economic and market research studies.