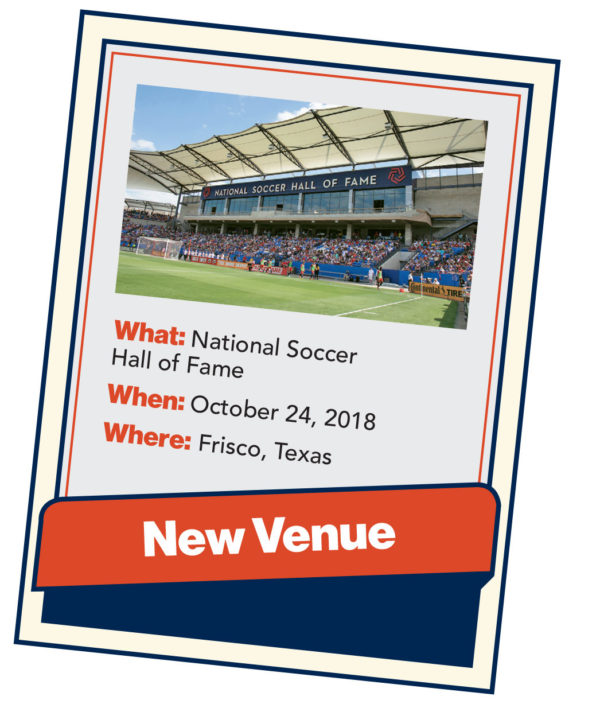 The new National Soccer Hall of Fame in Frisco, Texas, will house more than 400 historical artifacts celebrating the sport, but it aims to be more than a traditional museum when it opens in October. “My initial vision for the project was to change the perception of the National Soccer Hall of Fame from a museum to an experience,” said Executive Director Djorn Buchholz. “We want to push the envelope and create a personalized experience unlike any provided in sports.”

For starters, the institution is located inside Toyota Stadium, home of Major League Soccer’s FC Dallas, making it the first U.S. major league sports hall of fame to be built within a stadium. The hall is part of a $55 million renovation of the stadium that will feature more than 100,000 square feet of renovated space, new locker rooms and event spaces, includ­ing a 10,750-square-foot Hall of Fame Club and 3,800-square-foot Lamar Hunt U.S. Open Cup Club.

“Building the National Soccer Hall of Fame inside of the stadium was a brilliant move,” Buchholz said. “The venue now sits on a campus where more than 2 mil­lion people visit annually, and many of these people have an interest in soccer.” Additionally, designing the hall experience to be 60–90 minutes in length will allow people who are on campus for other events to fit it into their visit, Buchholz noted.

Part of that experience includes the use of facial recognition technology to tailor a guest’s visit. Upon entering, visitors will be asked to have their photos taken and to share information such as their hometowns, favorite U.S. teams, favorite soccer players and their level of fandom. Based on that information, the digital touch screens, virtual reality and other technology found throughout the venue will recognize and adapt to each visitor, creating a personalized experience.

Visitors also can expect to see interactive exhibits and memorabilia on display, such as all three FIFA Women’s World Cup trophies won by the U.S. (1991, 1999 and 2015) and a jersey from the inaugural FIFA World Cup in 1930.

The hall of fame will open to the public on October 24, just after this year’s induction weekend. A ceremony on October 20 will honor the National Soccer Hall of Fame Class of 2018: Cindy Parlow Cone, Bob Contiguglia, Brad Friedel, Don Garber and Tiffeny Milbrett. The induction will be followed by a concert by The Revivalists and Imagine Dragons. Festivities continue the next day with a matchup between FC Dallas and Sporting KC, followed by a North American Soccer League Legends Game.

The induction-weekend attendees may be the first to preview the space, but the new hall of fame is bound to make an impression on soccer fans  when it officially opens to the public. “You can create your own customizable experience based around your interests and soccer passions,” said Gina Miller, vice president of media and communications for FC Dallas. “It will probably be one of the most digitally focused and tech-forward spaces you’re ever going to see.”