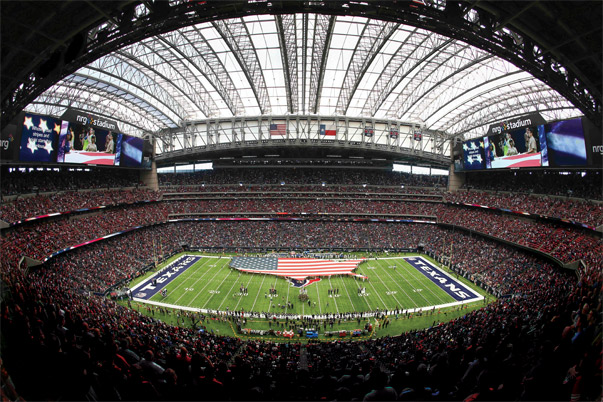 First organized because of a professional sports team that left the city, the Harris County-Houston Sports Authority will spend September celebrating its 25th anniversary with events that highlight the series of stadiums built in part because of what happened in the past.

The HCHSA was formed after the Houston Oilers left town to become the Tennessee Titans and other professional sports teams were being courted by other cities to leave the region. The city went to Texas state legislature to create a sports venue district that would be overseen by the city and Harris County and set up to build and oversee the bond debt service for future sports stadiums, become a landlord to tenants and develop into the sports marketing agency for the region.

The organization’s celebrations this month will include Chairman J. Kent Friedman and the HCHSA board throwing out the first pitch at an Astros game on September 6 and honoring over 500 volunteers at the game, plus it will unveil a fountain artwork piece featuring Houston Sports Hall of Famers later in September.

“I am extremely proud of everything we have accomplished here in Houston over the last quarter of a century,” Friedman said. “The HCHSA has been a driving force in bringing many new sports options to Houstonians, helping to create new generations of athletes and fans, and establishing a lasting legacy for the community through the power of sport.”

“I’m thankful that the local citizens voted to build new stadiums 25 years ago and keep our professional sports teams in our region, and I’m grateful for the good working relationship that we have with the tenants,” HCHSA Chief Executive Officer Janis Burke said. “Without these venues, we wouldn’t have been able to bid for and host the magnitude of premiere events that have been attracted to our region over the years.

“When I first arrived in Houston, we had three fairly new stadiums and one large hotel attached by glass skywalk to our downtown convention center,” Burke added. “The hotel and center were surrounded by asphalt parking lots and very few restaurants. It seems that our new stadiums were on the front end of the downtown rebirth and helped spawn what would become a dream footprint to attract major sporting events.”

PNC Stadium, now the home of the Houston Dynamo and Houston Dash for pro soccer, was built through a public-private partnership with no public financing with oversight assistance of the Sports Authority, who is also the landlord to that building.

“Many cities bring in big events without owning the buildings or overseeing the debt service, but our advantage comes with the trust and close working relationships we’ve created over the years because we are sitting around the table working together on other challenges or issues related to the buildings,” Burke said.

Between the facilities and a volunteer base of over 30,000 people, Houston in the past quarter-century has hosted NCAA National and Regional Championships, NBA and MLB All-Star Games and two Super Bowls. It will in coming years host the 2023 Men’s Final Four, 2024 College Football Playoff, 2025 AAU Junior Olympics and FIFA World Cup matches in 2026.

“Every event we host has a community or legacy element attached to it,” Burke said. “Whether that means creating a soccer field in an area that has no safe place for kids to play with monies that are created through hosting the event or buying bikes that can be checked out like a library book to be used at the bike/BMX park or creating opportunities for kids with physical disabilities to participate in sports by providing expensive wheelchair equipment, etc. for them to utilize. … We use sports to help change lives.”