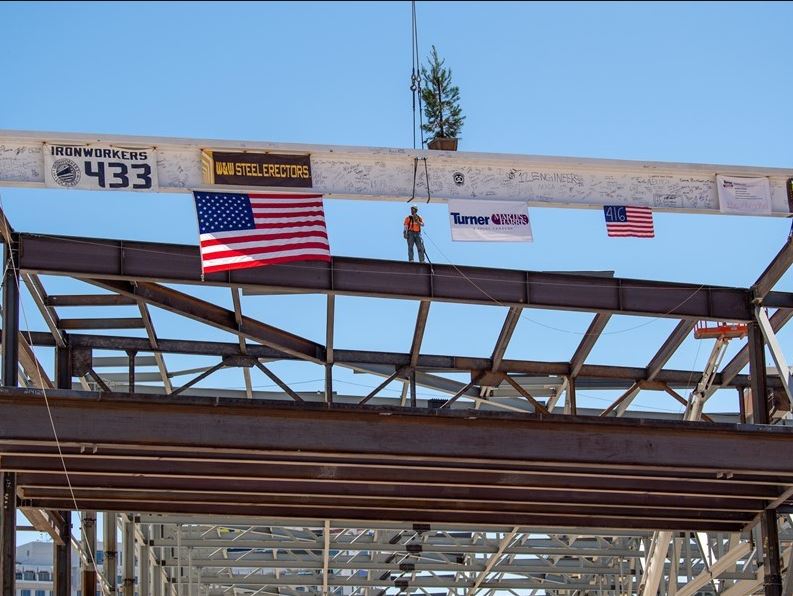 A 1.4 million-square-foot expansion to the Las Vegas Convention Center was celebrated as a final beam was hoisted above the exhibit hall recently, heralding the upcoming finish of the building process before a complete renovation of the center’s inside gets underway.

The convention center will reach the highest structural point of the expansion and be fully enclosed in October. To date, more than 25,000 tons of structural steel and 47,000 cubic yards of concrete have been used on the site, with expansion scheduled to be completed in December 2020 and opening up for guest in January 2021 for CES, one of the biggest technology events in the world.

The 1.4 million-square-foot expansion will be followed by a complete renovation and modernization of the complex’s existing 3.2 million square feet. More than 800 tradesmen and tradeswomen working on the construction site signed a 60-foot long, 90,000-pound beam that was integrated into the new 600,000-square-foot exhibit hall.

The expansion and renovation budget will total $1.4 billion.

“Supporting the Las Vegas destination through growing meetings and exhibitions is just one of many ways we fill the nearly 150,000 hotel rooms in our destination and can accommodate the nearly 15,000 of additional hotel rooms that are on the way,” said Brian Yost, Las Vegas Convention and Visitors Authority chief operating officer.

In addition to the Las Vegas Convention Center expansion and renovation, there will be nearly 3.5 million additional square footage of meeting space created in Las Vegas within the next five years. Large-scale convention and exhibit space projects throughout the destination include the recently completed MGM Grand Conference Center expansion, and several projects are slated for completion in 2020, including the Caesars Forum, Wynn Las Vegas meeting space expansion and the Expo at World Market Center.