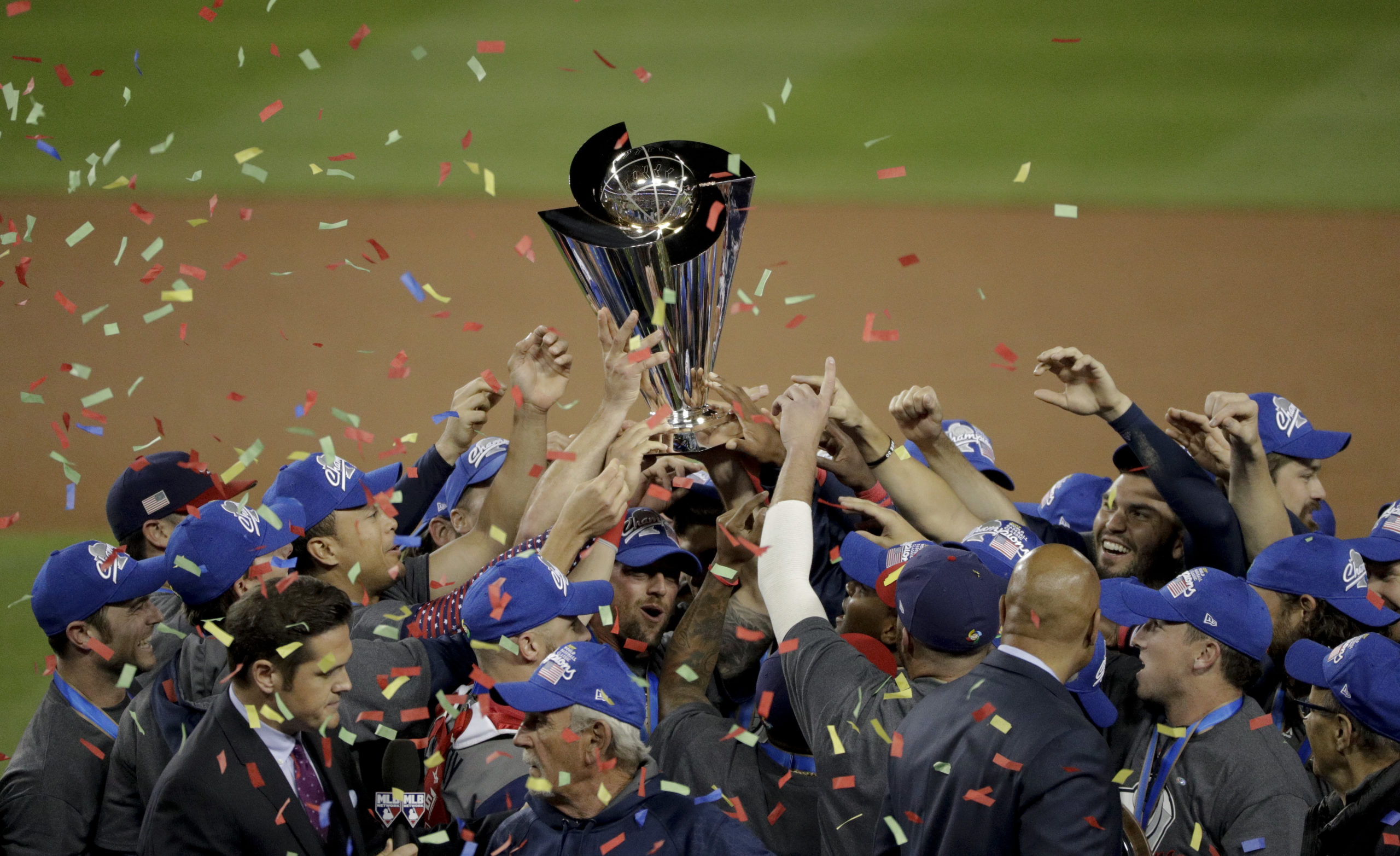 The U.S. team celebrates an 8-0 win over Puerto Rico in the final of the 2017 World Baseball Classic in Los Angeles at Dodger Stadium. (AP Photo/Jae C. Hong)

The World Baseball Classic championship round will be held away from the Western United States for the first time, as the 2021 finals will be staged at Marlins Park in Miami.

The announcement of the tournament sites and championship round host was made by Major League Baseball at Marlins Park, home of the Miami Marlins. The 2021 WBC, the fifth edition of the tournament, will be held from March 9–23, 2021.

Pool play rounds will be held at Taichung Intercontinental Baseball Stadium in Taichung, Taiwan; the Tokyo Dome in Tokyo, and both Marlins Park and Chase Field in Phoenix, home of the Arizona Diamondbacks. The 2021 WBC will feature four pools of five teams for round-robin play, with the top two teams in each pool advancing to the quarterfinals.

The field will expand to 20 teams for the 2021 tournament. The 16 teams that participated in 2017—Australia, Canada, China, Taiwan, Colombia, Cuba, the Dominican Republic, Israel, Italy, Japan, the Netherlands, South Korea, Mexico, Puerto Rico, the United States and Venezuela—will return as well as four teams advancing from the 2020 qualifiers, which will be held in Tucson, Arizona, from March 13–25.

Taiwan will host Pool A from March 9–13, with Tokyo hosting Pool B as well as quarterfinal games on March 16–17. The games for Pool C at Chase Field will be played March 13-17, and Pool D games at Marlins Park will be March 14–18, with the North American quarterfinals in Miami on March 19–20, followed by the semifinals and finals on March 21–23.

“We are thrilled to once again host World Baseball Classic games at Chase Field,” said Diamondbacks President and Chief Executive Officer Derrick Hall. “Arizona continues to shine on an international stage and we look forward to providing the best experience, not only to local baseball fans, but also those from across the country and around the globe as they cheer on the most talented players in the world.”

Marlins Park will become the first venue in WBC history to host games in all three rounds of a World Baseball Classic in the same year.

“Being selected to host all three rounds, including the finals, reaffirms Miami’s place as a global destination for all the biggest events,” said Marlins Chief Executive Officer Derek Jeter. “The excitement and passion on display in Marlins Park during the last World Baseball Classic showed what we already knew to be true about this market—that South Florida has an undying love for their heritage and the game of baseball. We are proud to welcome fans from across the globe to Marlins Park for this event and we are excited to show off all the new enhancements we have made to the ballpark since the tournament was last played here.”