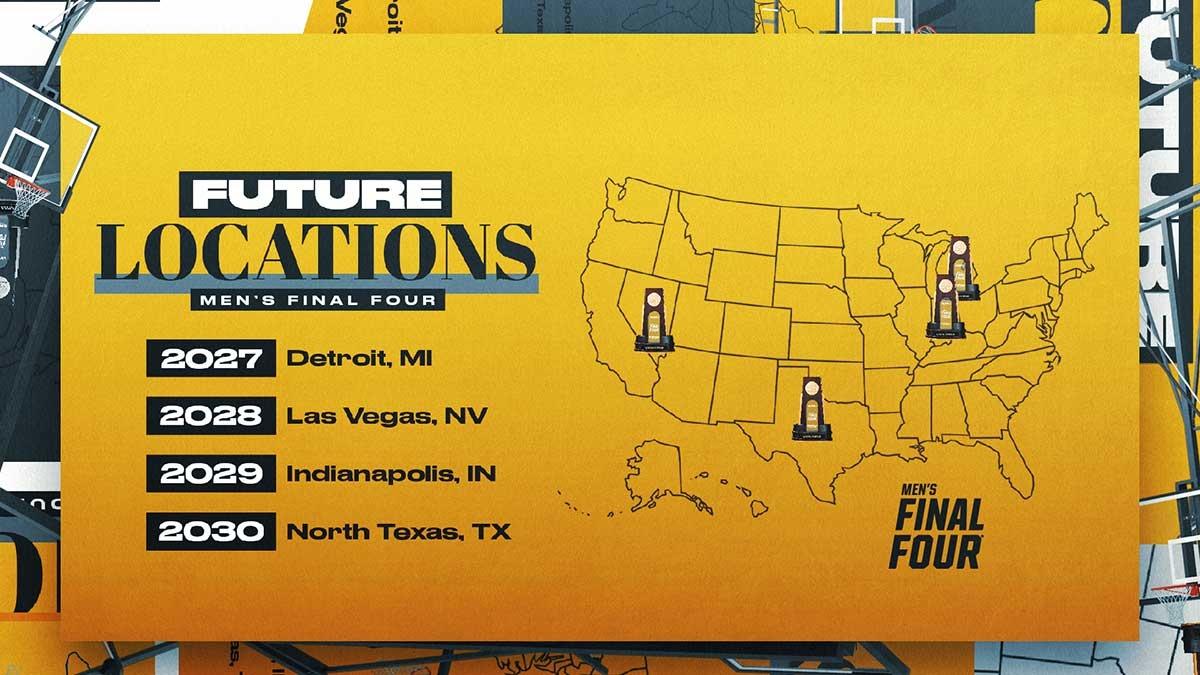 The Men’s Final Four will be heading to Las Vegas for the first time in 2028 as the NCAA announced the host cities for the Final Four for the next bid cycle of 2027 through 2030.

Also awarded Final Fours were Detroit (2027), Indianapolis (2029) and Dallas/Arlington (2030). Atlanta, Dallas, Detroit, Indianapolis, Las Vegas, Minneapolis and New Orleans were reportedly the finalists ahead of the four-year awarding of Final Fours. Presentations were given to the NCAA during a recent site visit to Houston ahead of the upcoming Final Four that will cap the 2023 tournament.

“We are excited to bring the NCAA’s premier championship to Las Vegas, a city that for a number of years has hosted numerous championships from several member conferences,” said Chris Reynolds, athletics director at Bradley and the chair of the committee. “The feedback from leagues, the fans of their teams and the media covering the events staged there has been overwhelmingly positive and we are confident we’ll get the same reviews when the Men’s Final Four is played at Allegiant Stadium.”

Dallas/Arlington (AT&T Stadium): Jerry World will host its second men’s Final Four in 2030, with the other coming in 2014 when No. 7 UConn defeated No. 8 Kentucky in a battle of the lowest combined seeds to ever play in the championship game. The only other Final Four in the Dallas area came in 1986 at Reunion Arena, won by Louisville against Duke. AT&T Stadium owns a clean sweep of Final Four attendance records, having drawn 79,444 fans to the national semifinals and 79,238 more to the championship game for a two-session total of 158,682.

Detroit (Ford Field): 2027 will be the second Final Four for the Motor City. The previous instance was in 2009, when the home state Michigan State Spartans made a run to the title game before falling to North Carolina for the championship in front of a large MSU contingent at Ford Field. Ford Field was the first venue to use the in-the-round seating configuration for the Men’s Final Four and holds the attendance record for most fans at a regional semifinal session (57,028) and regional championship game (57,563).

“We were really impressed with how the presenters from Detroit and North Texas rebounded from the disappointment of not being awarded a Final Four in the previous cycle and put their best foot forward during this entire process,” Reynolds said. “These communities should be proud of the leadership displayed by everyone involved with making these bids and ultimately earning the privilege to host an event of this magnitude. Both will be great locations at which to play the Final Four.”

“The privilege of hosting the Men’s Final Four is one we never take for granted and we are grateful to the NCAA Men’s Basketball Selection Committee for awarding us this opportunity,” said Patrick Talty, Indiana Sports Corp President. “The sport of basketball has deep roots in the state of Indiana, and we look forward to bringing the community together for this premier event and elevating the student-athlete and fan experience alongside the NCAA.”

“It’s been said many times about how coaches, players, fans and media love coming to the Final Four in Indianapolis, but I don’t think you can overstate just how much everyone enjoys their experience when they go there,” Reynolds said. “The people not only embrace major events, but they don’t take a single thing for granted. Every time this event is up for bid, anyone involved with the process approaches it with incredible energy and with an urgency that demonstrates the community’s desire to serve as a regular Final Four host.”

Las Vegas (Allegiant Stadium): The Final Four will be in the state of Nevada for the first time after the construction of Allegiant Stadium and relaxed rules about sports gambling in the athletics world. Las Vegas will host the 2028 Final Four, five years after it sees its first live NCAA Tournament action of any kind when the West Regionals arrive at T-Mobile Arena in 2023. In addition, Las Vegas is currently scheduled to host nine other NCAA championships before 2026, and now the city will host the 2028 Men’s Final Four.

“The Raiders are thrilled to welcome the NCAA and college basketball fans from around the world to Las Vegas and our home at Allegiant Stadium,” said Sandra Douglass Morgan, president of the Las Vegas Raiders and Las Vegas NCAA Final Four bid team. “Our facility is a state-of-the-art, ideal venue for world-class sporting events.”

“The Final Four is one of the marquee events in sports and we are thrilled to have the opportunity to be the host in 2028,” said Steve Hill, chief executive officer and president of the Las Vegas Convention and Visitors Authority. “The excitement of Final Four basketball combined with the energy of Las Vegas will create an unforgettable experience for teams and fans alike. We can’t wait to welcome the Division I Men’s Basketball Championship to the Greatest Arena on Earth.”