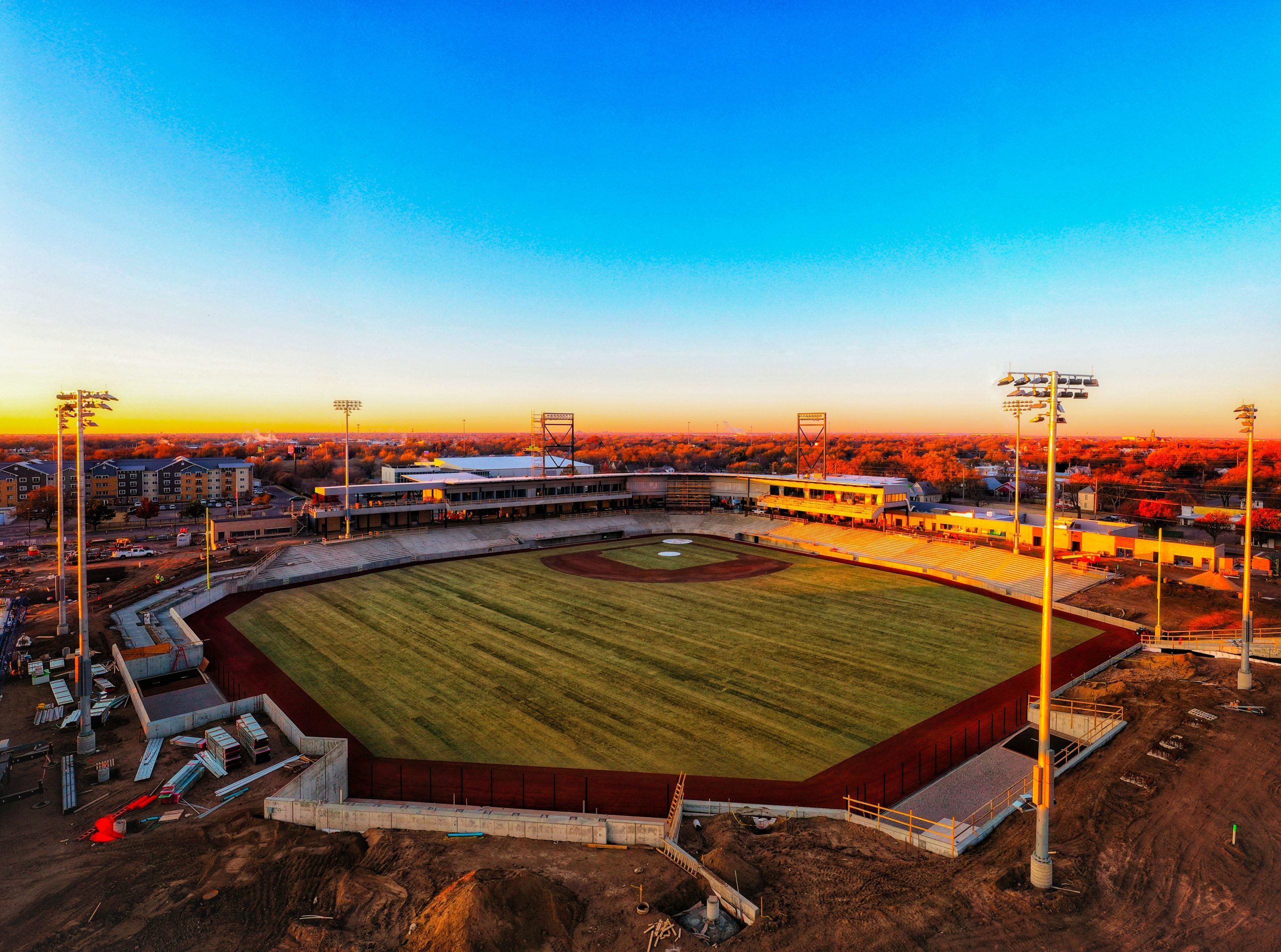 The new Wichita stadium will open in April on the banks of the Arkansas River. Photo: Drone-Topgraphy LLC

After more than a decade, Major League-affiliated baseball is back in Wichita, Kansas. And it’s coming with a new ballpark, a new pedestrian bridge over the Arkansas River and a rejuvenated riverfront area that the city hopes will be a catalyst for future events.

Wichita officials have been trying to land a Minor League Baseball team since the city lost the Double-A Wranglers to Arkansas after the 2007 season. After years of effort, the city put together a proposal to relocate the New Orleans Baby Cakes, the Triple-A affiliate of the Miami Marlins, ahead of the 2020 season and change the name to the Wichita Wind Surge.

And when the season begins, the team will begin play in the new 10,000-capacity, as-of-yet-unnamed stadium in April.

Landing the team, along with a new ballpark, was a huge win for Kansas’ largest city. “There are only 30 Triple-A cities in the world. Wichita now joins that,” said Lou Schwechheimer, the Wind Surge’s managing general partner. “It’s going to be one of the most beautiful Major League-looking ballparks with every possible amenity. This really is a magical place.”

In addition to 70 Wind Surge games, the stadium expects to host over 200 events each year, including concerts, festivals, high school football games, scouting activities, free youth baseball clinics, baseball tournaments, movie nights and more. The team also plans to create seasonal displays and will have an ice skating rink in the outfield during winter months.

“Baseball stadiums truly can be the front porch to the community,” Schwechheimer said. “We want this to be a gathering place for all ages, and all seasons, that will help propel Wichita to being one of America’s great cities.”

For the new ballpark to be built, iconic Lawrence-Dumont Stadium, which had been the home of Minor League Baseball in Wichita for 80-plus years, was demolished in 2018.

Construction on the new stadium began in February 2019 and will be ready to welcome fans for the team’s first game on April 14. It will have a seating capacity of roughly 10,000 for baseball, including 6,500 to 7,000 fixed seats, 15–18 luxury suites, as well as berm seating, party decks and picnic areas that can accommodate up to 3,500 additional spectators. Schwechheimer noted the team will have flexibility on seating for special events, and that the venue will be able to hold 14,000 for football games and 18,000 for concerts.

The $75 million ballpark is funded in part by state-approved sales tax revenue, or STAR, bonds, which will divert future sales tax proceeds in the area to fund a project that comprises more than the stadium proper.

The larger development, which will be completed in three phases over the next five to seven years, includes a National Baseball Congress museum, riverbank improvements and infrastructure including hotels, bars, restaurants and an amphitheater. There will also be space for commercial development around the stadium.

Additionally, Wichita has committed to build a $6 million pedestrian bridge across the Arkansas River that will connect the east and west banks and provide easy access to the entertainment district. The bridge was in the original construction timeline to be completed along with the ballpark, but Schwechheimer said after discussions with the city, they decided it would be prudent to first study traffic and pedestrian flow and how the east bank would evolve. The west bank, which is home to the ballpark, is growing at a faster rate, and officials want to make sure the bridge is in an optimal location. Bridge construction, which is part of Phase 1, is slated to begin in the fall of 2021 and is expected to take roughly 18 months to complete. A master plan for phases two and three is in the works.

With all this new development and growth, there is enthusiasm around the project and what it means for the city and the surrounding area. “What we have here is truly a once-in-a-generational opportunity,” Schwechheimer said. “We would love to continue to be a catalyst site that encourages more development, more energy and more entertainment options here in Wichita and that activates and energizes the whole region.”

Brian Hargrove, executive director of sports development at Visit Wichita, said the stadium adds to the momentum the city has been building over the last 10 years and is an excellent marketing tool when the city goes after sporting events. “It will open the door for so many new opportunities,” said Hargrove. “It will attract new people for the city to watch baseball, and they’ll make a weekend or a summer vacation out of it. I really feel like the impact will be huge with the excitement of having the new team in town.”