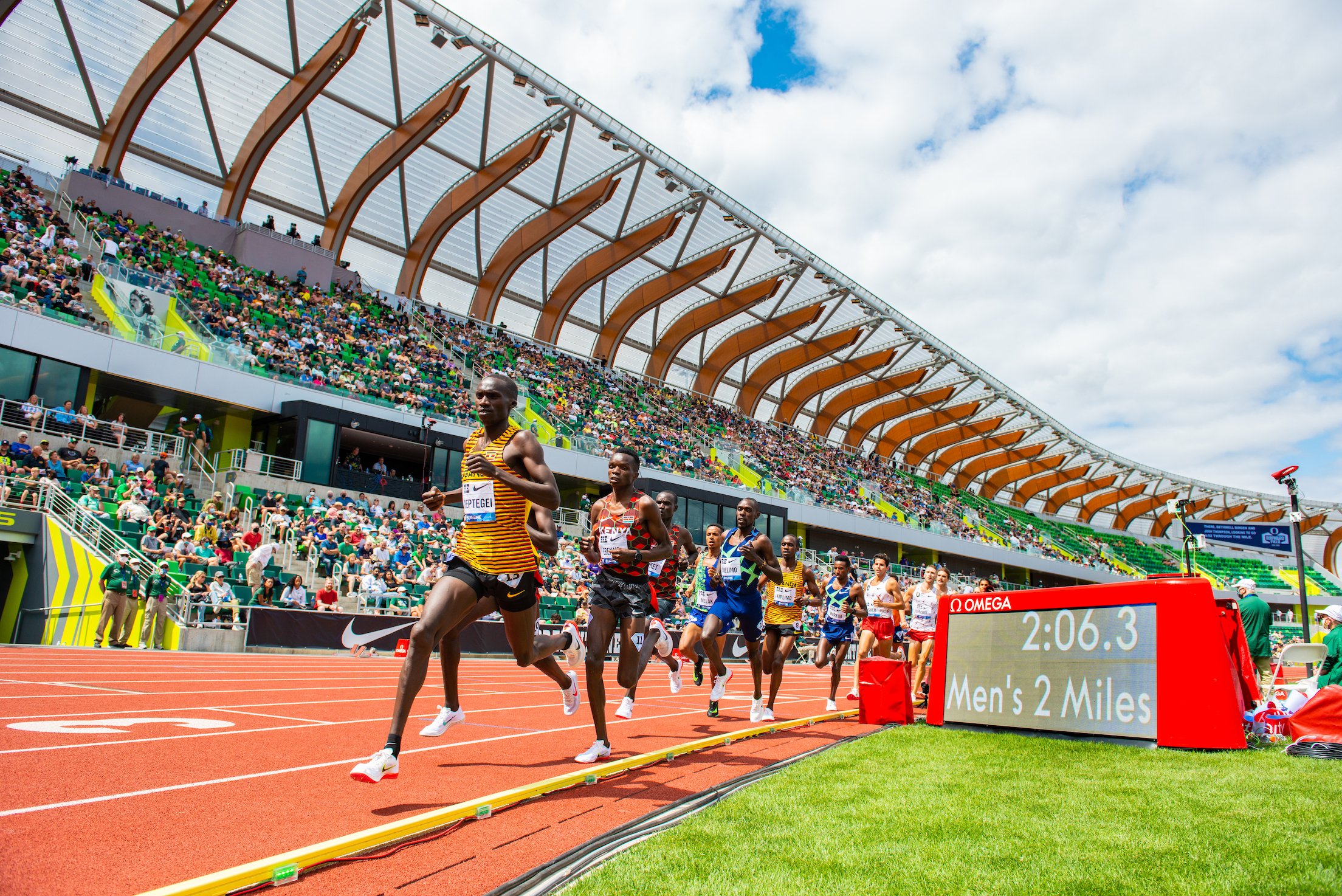 The 2021 Prefontaine Classic took place last August. The 2022 event moves back to its traditional dates. Photo courtesy of TrackTown USA

Hayward Field in Eugene, Oregon, has always been near the top of any list of track-and-field venues not only in the United States, but the world.

Now, the historic spot that has seen so many record-breaking performances is ready to take center stage this year with a series of big meets to show off its recent $270 million renovation with a capacity crowd.

The Prefontaine Classic is as iconic as the venue in which it takes place. Named for Steve Prefontaine, one of the greatest U.S. distance runners in history, the event invites the best in the world in 14 track-and-field disciplines.

That’s where Michael Reilly and TrackTown USA come in. Reilly, a former runner at Stanford, is co-meet director of the Prefontaine Classic and chief executive officer of TrackTown USA, which helps organize the event.

After seeing the Prefontaine Classic cancelled due to COVID in 2020, the 2021 event took place in August. Everything is full speed ahead in 2022 and back to the normal dates for an event that, according to Travel Lane County, has an estimated economic impact of $1.24 million.

“I feel much better about 2022 than I did about 2021,” Reilly said. “This year has been great. Everybody in the sports world has learned over the past year how to do things more safely. Regulations not changing week-to-week has led to more certainty and we’re really seeing that reflected in ticket sales, where we’re on a record pace.

“Most of the medalists from the Tokyo (Olympic) Games will be here, so that creates a spectacular opportunity for people who didn’t get a chance to come to the Olympic Trials last year to see these star athletes up close and personal.”

“We’re thrilled to host these great athletes,” Reilly said of the Paralympians. “Adding those events came about through a great partnership with Nike – they’re the title sponsor of the Prefontaine Classic, but this is an additional investment they’ve made. The athletes in those two events will earn the same prize money as the athletes competing in the Diamond League disciplines.

“Hayward Field is the heart of the sport of track and field at all levels and for all athletes. We will have some of the great medalists from the Tokyo Paralympic Games – great American athletes – and I really hope this is the first step to having many more Paralympic events at the Prefontaine Classic.”

As with any iconic venue, Hayward Field has had to adapt and improve since opening in 1919. It has undergone renovations in 1974 and 2004, but nothing like what took place the past few years when a $270 million facelift elevated Hayward Field to a new level.

The reformations expanded the seating to 12,650 from 10,500 in permanent seating, with expandable seating bringing the maximum capacity to 25,000.

The new 10-story tower that overlooks the stadium is modeled after an Olympic torch. It features a lobby filled with interpretive exhibits and multiple levels for viewing with a top-story observation deck.

The stadium has a new LED lighting system, indoor practice facility and an added ninth lane on the track. The unique -looking, bent roof has acoustics to send noise directly onto the field.

“The way Lane 9 is configured, there’s about three feet between it and the front row of seats,” Reilly said. “They’ve located as many seats as they could around the finish line, because that’s where everybody wants to sit.

“The field of play stayed in the same configuration, but the athletic surface of the track was specifically tuned to make it the fastest track in the world. And I think at the World Championships this summer, the times that get posted in those events will validate it.”

“For us, the Prefontaine Classic is an opportunity to showcase our athletes in May as they get ready for the U.S. and World Championships in June and July,” Reilly said. “This event starts that journey and it will shine a spotlight on the sport in the United States like never before.”