Home > Latest News > 3 Companies Preparing for the Return of Spectators 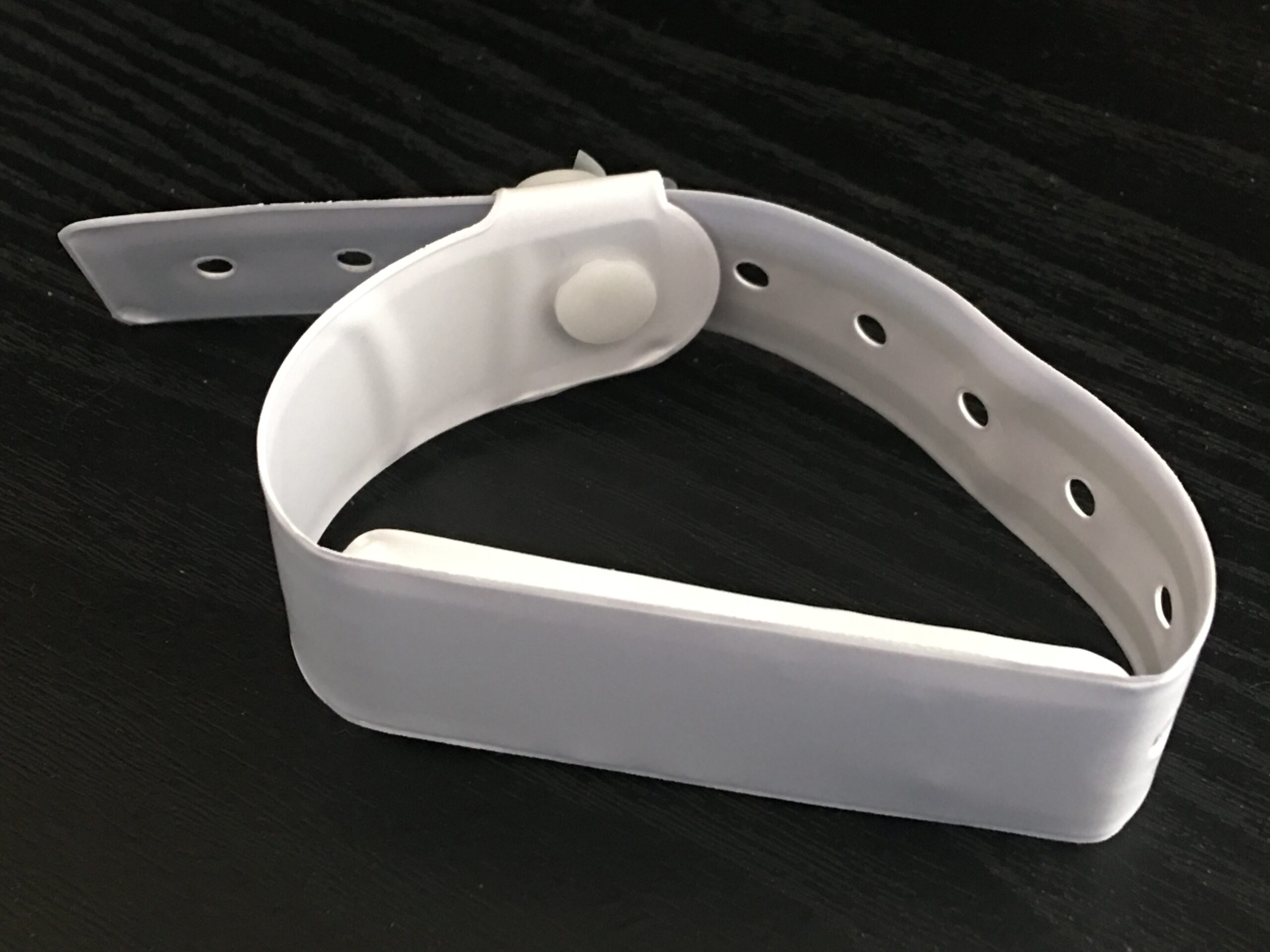 So much of the sports-event industry’s return to action from the COVID-19 pandemic has been focused, as a first step, on making sure the competitors are able to perform without the risk of catching the coronavirus.

But just as important is how crowds will be able to become part of the scenery again — first in restricted numbers and then eventually in larger concentrations. The ability to have crowds is vital for any team’s financial revenue. But they must also make sure that health and hygiene are foremost in their plan to host spectators again in their venues.

Here are three companies working with sports organizations to envision a return of spectators to sports events.

Tracking Fans at Their Wrists

TraceSAFE is one company that is trying to come up with a way to take the knowledge it has gained overseas and bring it to North American sports teams. The Laguna Hills, California-based company has recently been providing contact tracing wristbands to the Hong Kong government to make sure foreign visitors do not spread coronavirus in that metropolitan area. But its founders see a sports application as well. 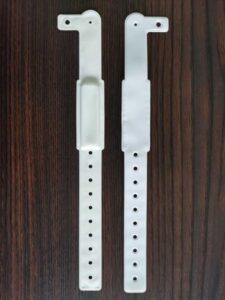 The company’s disposable wristbands register a user through a wrist tag that can log the user’s specific location for a period of time through a single application used by both the user and administrators. Among other things, the wristband allows users to declare if they have entered quarantine and prompts periodic check-in acknowledgements for those who have been in contact with a person who has entered quarantine.

In sports, the company sees a number of potential uses for the technology.

“During the course of a game, it keeps tabs on who you were close to and for how long, all in a super privacy-minded way,” said Wayne Lloyd, president of the company. If you have been in contact with somebody who reports after the event that they have COVID, you would then be notified of that contact.

Lloyd said TraceSAFE is getting “huge interest” from teams and leagues in all professional sports. It recently signed a partnership deal with the Toronto Wolfpack, a Super League rugby team, to use the wristbands for fans when they are eventually allowed to attend games again. While the biggest concern over use would be privacy issues for users, Lloyd said the wristbands are “totally secure” with modern encryption in each device.

He compared the use to similar bands used on site at Disney theme parks, which use a band system for rides and food and beverages. “(The Disney band) is a commercial device,” Lloyd said. “Ours is a medical device that we’re bringing into a commercial environment. From the data sensitivity side, the Disney bands are not able to access any data about a person’s whereabouts (outside the venue). That’s all totally secure. It’s the same thing with our app.”

The partnership between TraceSAFE and the Wolfpack was generated by Toronto’s owner, David Argyle, who is a former business partner of TraceSAFE co-chair James Passin.

“Whatever the government allows the (capacity) protocols to be — 30 percent, 35 percent, 50 percent, whatever that number is — our relationship will give our fans a higher comfort level, which we believe will bring them back,” said Wolfpack Chairman and CEO Bob Hunter. “I don’t think anyone is comfortable in mass gatherings, but at the end of the day this is sort of a bubble around you that will give you, your family and your friends a higher level of comfort.”

The Wolfpack are in a unique situation being the only team in Canada playing in The Super League, which is the top tier of rugby in the United Kingdom. Having won promotion to the league last year, the team may not be able to host home games the rest of the calendar year because of travel restrictions and quarantine regulations in Canada and the UK — “it’s disastrous to put it mildly,” said Hunter of potentially missing on home games for several more months. “We gained so much momentum last fall.”

In a way, that determination to make sure fans have greater peace of mind when they are allowed back is one of the factors that spurred the partnership between the team and company.

“The biggest learning experience is making sure we work with the venues and owners involved to make sure there’s an optimal fan experience,” Lloyd said. “Optimizing the fan experience and making sure it’s minimally invasive and totally seamless has been a big priority.”

Spectators at events often need refreshments — and venues will always need the revenue that comes with food and beverage purchases. To be able to do that in a post-COVID world, the need for concession purchases to be as contact-less as possible will be imperative. 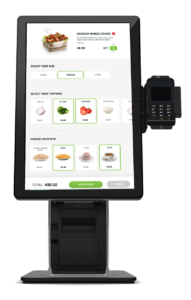 Sam Zietz is the founder and CEO of GRUBBRR, which makes contact-less kiosks for attendees to enter food and concession orders. The company, he said, has spent the summer having conversations with teams from every major sports league in the United States, plus college athletics programs, about the technology.

“The issue all these groups have is that they already have a playbook for anything that could happen,” Zietz said. “But there is no playbook for a global worldwide pandemic that shuts everything down. That’s where we’ve been playing not just solution provider but more of a consultant and adviser to make them aware of best practices because it’s so new that there’s no place to really reference what works.”

The ability to provide contact-less concessions allows workers in those areas to be able to focus on more than taking orders. It will provide increased levels of service either delivering food or in other places around the venue as well, he said.

“The cashier was going to go away anyway, much like the bank teller mostly went away over a 10-year period,” Zietz said. “COVID has accelerated that time frame. Instead of occurring slowly, it’s going to happen in a much quicker manner. Self-ordering has become more of an omnichannel approach — kiosks being one channel, online being a component, mobile another.

“Things you used to take for granted in a stadium such as bottomless popcorn and soda, those days are done,” he said. “You’re not refilling things. Even the condiment stands where you would go and squeeze the giant ketchup for your hot dog, you won’t be doing that either. They have to account for those types of things and try to minimize hot spots of congestion. The technology that we’ve enabled is the ordering from your seat and being notified when your food is ready so there’s not a lot of people standing around the concession areas.”

The return of fans to sports venues has already started happening on smaller scales from the youth tournament level to select NASCAR venues. As more teams try to bring spectators back on a limited basis, having different staging areas for seating will be a modification that many will have to contemplate.

“We’re initially a little cautious since we’re not sure when venues will go to 100 percent (capacity),” said Jessica Ley, marking coordinator for Staging Concepts, a portable staging and seating equipment company. “It’s going to be very spaced out. You may see venues blocking out rows of seats so you’re alone in your own small group. One-hundred percent capacity is not something we’re going to see in the near future.” 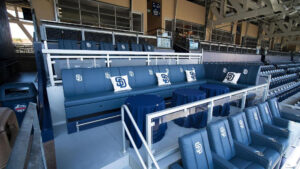 Cindy Albrecht, director of sales and marketing for Staging Concepts, said the company has already received requests from venues to take sections of row seating and turn them into separated areas that can be used by small groups of families that are allowed at an event together without having to socially distance. In the past, the company has used tables and half-walls for separation. The new methods are “going to mean less overall seating in the venue but you’re creating that comfort and experience within the party you came to the game with,” she said.

Regardless of your party’s size, getting to seats will also be different: “You’ll see quite a bit of equipment added whether permanent or temporary that will alter the flow of a crowd in a venue,” said Blake Stromme, Midwest sales manager for Staging Concepts. “You’ll see dedicated one-way hallways and concourses so everything will be much more structured than the free form chaos you’ve seen in previous events.”

Another aspect of venues that may shift with a limited number of fans will be more creative use of the remaining space for camera platforms for television and streaming audiences. “With the flexibility and mobility of equipment,” Albrecht said, “if you need a camera platform here and here and here (at a venue), you can assemble one and it can move around.”