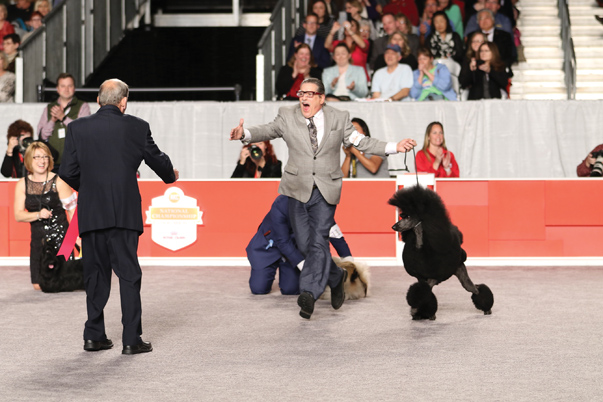 The 2016 AKC National Championship presented by Royal Canin was one of the largest dog shows ever held in North America. And in the end, a Puli named Preston earned Best in Show honors, beating out nearly 5,000 competitors—representing 190 breeds—and earning a $50,000 cash prize at the event at the Orange County Convention Center in Orlando, Florida.

The 16th edition of the AKC’s National Championship featured a multitude of events. Along with Best in Show and Best of Breed competitions for its seven groups (sporting, hound, working, terriers, toy, non-sporting and herding), other proceedings included the AKC Agility Invitational, the AKC Obedience Classic and junior events.

The number of entrants in the main competition set a new show participant record, eclipsing last year’s national championship entry of 4,670 dogs. The prize money was the largest award in the world of dog sports.

“The record number of entrants tells us that this event is a well-organized event held in a world-class facility, which makes it fun and easy for people to attend,” said Gina DiNardo, vice-president of the American Kennel Club. “Our exhibitors love coming
to Orlando.”

“The AKC National Championship presented by Royal Canin is a well-oiled machine,” said Kathie Canning, executive director of the Orange County Convention Center. “At this point in our relationship, we are well planned and equipped for the unexpected. Attendance was at a record high. Even with expanded aisles for Meet the Breeds on Saturday and Sunday, spectators were still elbow-to-elbow.”

The Orlando event, which included events beginning December 13, was a boon to the region. Although economic impact calculations are not complete, expectations are high. “There is a substantial economic impact from dog shows on a local community,” DiNardo said. “Per the Orlando Convention & Visitors Bureau, an estimated $43 million is generated in the community due to the show.”

The Orange County Convention Center is a veteran of hosting the AKC annual event. “Dog shows are a departure from the normal, but definitely a breath of fresh air,” Canning said. “The dog show planners, exhibitors and attendees are a breed of their own. They bring so much excitement and entertainment to our venue.”

Ancillary events included Meet the Breeds booths, which gave attendees a chance to encounter dogs from more than 150 breeds, and a Doggie Boutique featuring more than 100 vendors, giving dog owners an opportunity to spoil their four-footed friends.

“The people of Orlando are always wonderfully receptive to the event and are very welcoming,” DiNardo said. “The area hotels are great to work with—they make special allowance to allow very well-behaved dogs in their rooms. It is a pleasure to do business in the Orlando community.”

The 2016 championship marked the eighth year that Orlando served as host of the event. The city is scheduled to host through 2020.