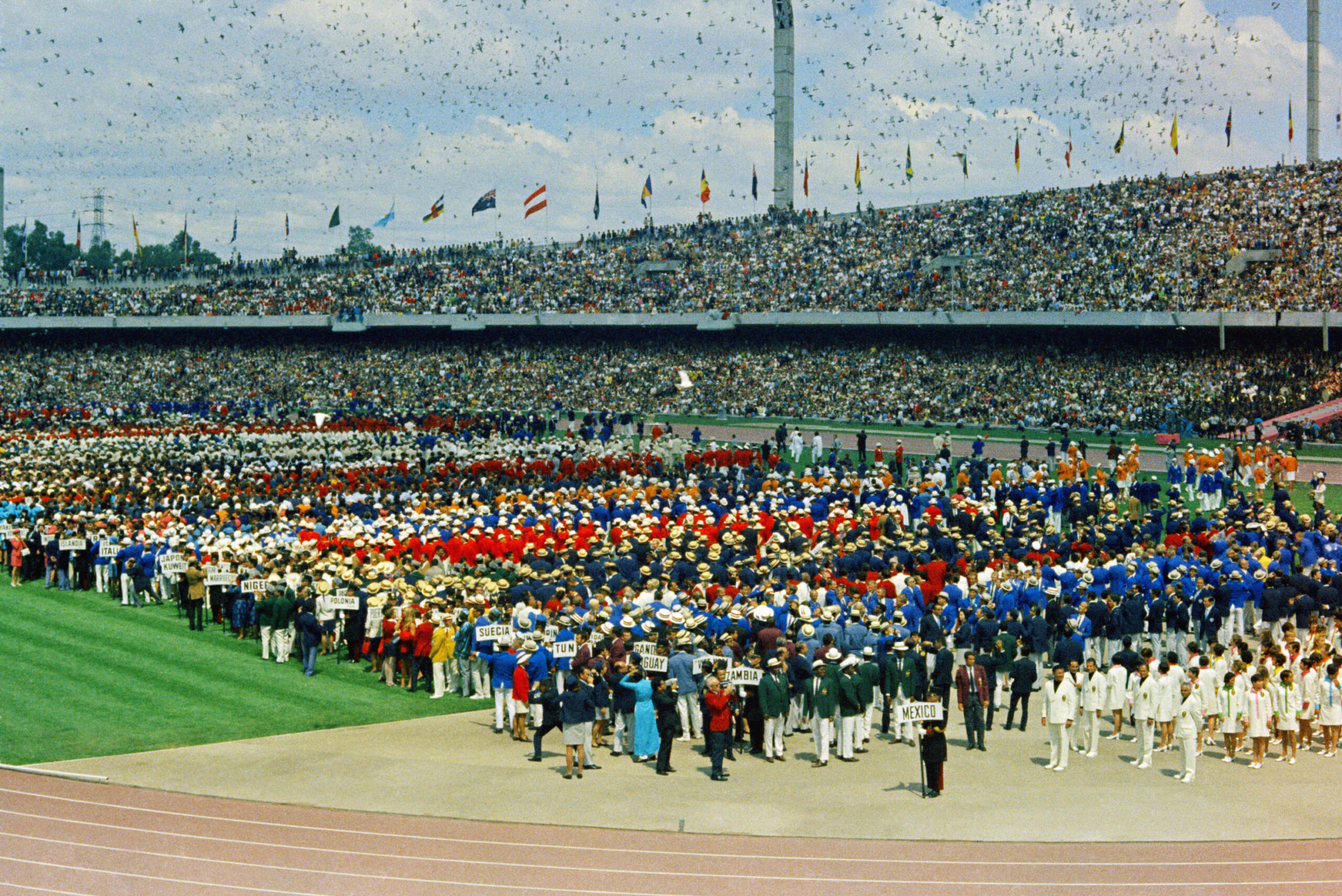 Athletes gather in the University City Olympic Stadium for the Opening Ceremony on October 12, 1968, for the Summer Games in Mexico City. The 72,000-capacity venue opened in 1952 and was used for the 1955 Pan-American Games, 1986 FIFA World Cup and the 1990 Central American and Caribbean Games and remains active as a soccer stadium. (AP File Photo)

Another previous host of the Olympic Summer Games has shown interest in hosting a future Games, with the Mexican Olympic Committee beginning discussions with the International Olympic Committee over the possibility of a bid for 2036.

Mexico City was the host in 1968 and will be one of three cities in Mexico to host matches at the 2026 FIFA World Cup along with Guadalajara and Monterrey. A specific city that would be the country’s candidate has not yet been identified.

“It is very important to have had this meeting because we have to do an analysis not only in sporting and structural matters, but also with geopolitical issues: which cities are developing, which ones could have infrastructure, which ones could be alternate venues,” MOC President María José Alcalá told Milenio according to reports. “We have to build all these details. These doubts will be dispelled by the IOC in the area of the venues, but it is a long road, it is not overnight.”

The Mexico City Games in 1968 — the first Latin American country to host the Olympics — are famous for reasons both on and off the field of competition. Bob Beamon’s record-setting long jump, a mark that stood for decades, was at the 1968 Games along with George Foreman’s gold medal in boxing. The Games also is famous for when American medal winners Tommie Smith and John Carlos each raised a black-gloved fist during the 200 meters medal ceremony in a black power salute.

“The Foreign Minister is a man of great vision and understands that in 1968 Mexico was at the forefront through the Olympic Movement, he understands what being the host implies,” Alcalá said to local media. “It’s step by step, not to give bells to the air. First you have to see the real possibilities that Mexico has and you need to form a group of specialists to host the Olympic Games.”

Those Olympics are also infamous in ways. It was the first time that East and West Germany competed as separate teams. The Mexican Army also massacred hundreds of students who were protesting the country’s hosting as millions of pesos were spent on the event instead of areas that they felt were more in need of the investment on October 2, 10 days before the Games.

Germany is considering a potential bid after hosting the European Championships in Munich this summer. Germany has not hosted a Summer or Winter Games in decades. Its history of hosting the Summer Games is infamous — 2036 would be 100 years after the Hitler-organized Games in Berlin while the other time the country hosted the Olympics was 1972 when 11 Israeli athletes and coaches and a West German police officer at Olympic village were killed by Palestinian Black September members.

Istanbul, a serial bidder for the Olympics that has tried for five of the past six Summer Games to be part of the bidding process, will put itself forth as a candidate again in 2036. The Turkish capital was runner-up to Tokyo to host in 2020 (which became 2021). Another country interested in bidding is Indonesia — but the city the country is proposing as the host, Nusantara, has not even been built yet. Construction on the city began last month after overcrowding concerns in the country’s capital, Jakarta. Several other countries have also had early discussions about 2036 bids including the UK, Germany, Russia and Qatar.

The question that observers would ask is how can you start planning a bid for an event 12 years away? The answer is the new process in which the IOC selects cities, which means that being out early as a potential bidder is key. The 2036 host will follow Brisbane, Australia, which was selected as the 2032 host in quick fashion and stunned several other potential bidders who thought the process would be more drawn-out before the Future Host Commission’s announcement.