There are tens of thousands of volunteers at the Olympic Winter Games, doing any number of tasks such as directing people to venues, assisting with security and telling people which buses they need to board. Most work for the Pyeongchang Organizing Committee, but each national Olympic committee usually has its own people volunteering in some capacity to help with more specific needs. And it’s safe to say none of those volunteers cuts a lower profile than one of the most high-profile people offering their time for the U.S. Olympic Committee.

In the USOC’s makeshift office at the Main Press Center in Pyeongchang sits a man whose responsibility is to dole out tickets to the media for what are deemed “high-demand events.” At the Winter Games, those are the opening and closing ceremonies, all figure skating events and the later rounds of men’s hockey. (For the summer, think swimming, men’s basketball and gymnastics…) While media can come and go for events at the Olympics with a credential, for those high-demand events, they also need a ticket provided by their national Olympic committee. That’s where Bill Hancock comes in.

If his name sounds familiar, it should. That’s because his day job is leading one of the most high-profile sporting events in the United States, serving as executive director of the College Football Playoff. Before that, he spent 16 years with the NCAA Division I Men’s Basketball Championship, including 13 years as director. In that capacity he was the first full-time director of the Final Four. In other words, he is no ordinary volunteer manning a small table in a nondescript office deep in a temporary building in the mountains of South Korea. SportsTravel caught up with Hancock to talk about how his unique Olympics volunteer job came to be. 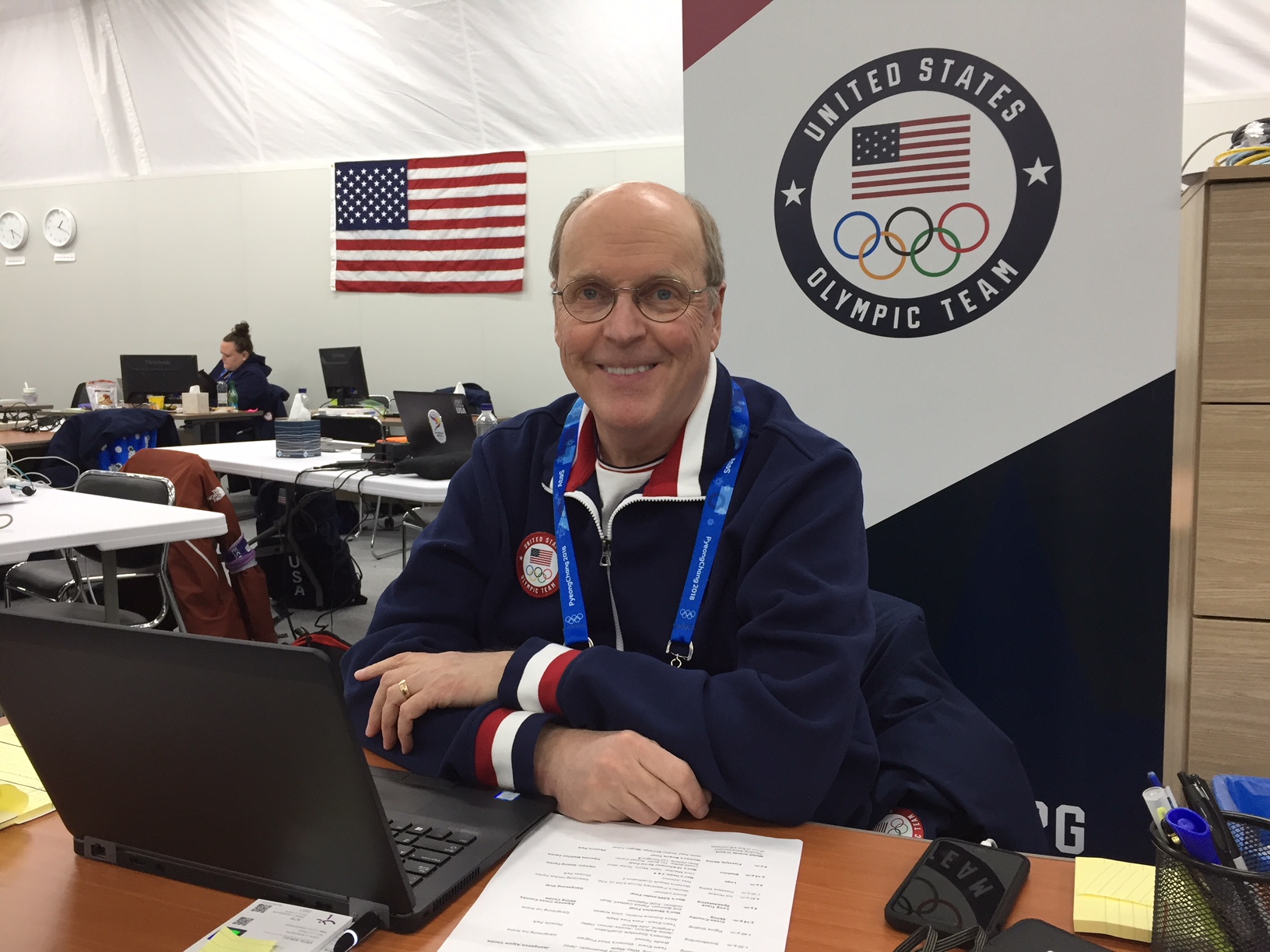 SportsTravel: How many Olympics have you been volunteering at now?

SportsTravel: Which Olympics was No. 1 and how did that come to be?

Hancock: Olympics No. 1 was Los Angeles in 1984. I was communications director of the Big 8 Conference at the time and the U.S. Olympic Committee had fairly recently hired its own communications director, Mike Moran. Mike reached out for people to volunteer to help with USOC communications for the various teams and he went to the college ranks. Mike’s feeling was there was no better group of communications people than college SIDs (sports information directors). So he invited me to go to L.A. and I thought I’ll never get to go to another one, but I’ve had the greatest time and was so grateful for this one opportunity.

SportsTravel: What specific role did you play in Los Angeles?

Hancock: Mike had an idea for our sake to assign us to a different sport every day. So I worked with wrestling, women’s basketball and some others and I went to different events every day. It didn’t work very well because we didn’t have the chance to get to know the athletes we were working with. We would walk in and ask the athletes to do things with media where they didn’t know us any better than they knew the media. But that didn’t detract from my experience at all. I had a great experience and I loved it. And then in Seoul in 1988, I worked women’s and men’s tennis. That was the first time tennis had been in the Games. Then in Barcelona, I worked women’s basketball. And in Atlanta, they moved me into what I’m doing now, which is special ticketing for media.

Hancock: Special ticketing happens when there aren’t enough seats in the media area, called the media tribune in Olympic jargon, for all the media who want to go cover the event. In that case, the International Olympic Committee prints tickets for every seat in the media tribune and allocates those tickets to every country. So my job is to take the USA allocation and determine which reporters are able to get tickets.

SportsTravel: What are the criteria you use to determine who gets what?

Hancock: There’s criteria, such as do you have a hometown athlete? Do you cover the Olympics regularly? Do you have a beat writer? And then it goes down to common sense things like circulation and number of Olympics covered in the past. I just work within the criteria to assign the tickets.

SportsTravel: Does it ever get tricky for you?

Hancock: It does. In summer Games in particular for swimming and sometimes men’s basketball, we have to decline a fair number of applications. But we just go based on the criteria. Over the Games, we try to get a person in at least once, so if I didn’t get someone into figure skating for the men’s short program, I would try to get them in for the ladies’ short program. You probably figure everyone gets in at least once and we’ve been successful at that.

SportsTravel: Have there been any things in your Olympics experience that have opened your eyes in your other day job running events?

Hancock: The Olympics, the Summer Games in particular, is like 16 College Football Playoff Championships every day, for two weeks. So the scale is just enormous. Having had an opportunity to pluck little things that Olympic organizing committees do through the years has helped us. I learned some things that helped me in the Final Four. And I’ve learned some things that have helped me in the CFP. Transportation is one thing. Their transportation is 30 times more detailed and widespread than what we do at the College Football Playoff, but you can learn.

SportsTravel: Have there been any things over the years that have surprised you at how the Olympics are organized?

Hancock: Every one is different. This one reflects the culture of the country because it is so precise, and the people are so friendly and so helpful. But every Olympic organizing committee manages the people part very well. They’re always helpful, friendly, engaging, bright volunteers. And they are the ones that make it go at every Games.

SportsTravel: Let’s talk a little football while we’re here. I’m not sure how you have managed to get a such a great College Football Playoff Championship Game nearly every year…

Hancock: We have nothing to do with it on the field, but we’ll take the credit. (Laughs.)

SportsTravel: With your most recent announcement of host cities through 2024, the CFP National Championship will have gone to 10 cities in its first 10 years. Was that intentional?

Hancock: It was. That was our goal. When we started the playoff, our goal was to spread the championship around, to take it to different parts of the country. And we never calculated how many years we could do that but we’re so proud and happy that we were able to do it through the first 10 years.

SportsTravel: Is that something you think can continue or necessarily should at this point?

Hancock: It’s too soon to tell. But it’s been great. Having it move around for the first four has been terrific and I know we’ll sit back at the end of the 10 years and say this has been great.

SportsTravel: You had one big last-minute logistical challenge at this year’s game when President Trump decided to attend at the last minute…

Hancock: The fan presence—no matter who the fan is—is challenging. I worked with Bill Clinton at the White House when he went to the Final Four and it was challenging. There’s nothing more important than security of the president of the United States and nobody better at that than the Secret Service.

SportsTravel: How long before the game did you know the president was coming?

Hancock: We had about five days. And the bulk of it fell on the stadium but our staff was heavily involved in all the meetings and the planning. The unfortunate thing is that because of the president, roughly a quarter of the stadium gates were closed, and then those people had to go somewhere else and it put a lot of pressure on the other gates. But it’s an honor to have the president of the United States at the game.

SportsTravel: You’re handing out tickets to events at the Olympics, but do you get to go to any events yourself?

Hancock: Yeah, if it’s not a high-demand ticket day. Yesterday, I went to curling. Today I went over to figure skating.

SportsTravel: Any other closing thoughts about your role here?

Hancock: This is a volunteer position—it’s basically what I do for my vacation. But I just love the Olympics and I’m very honored to be a part of it.