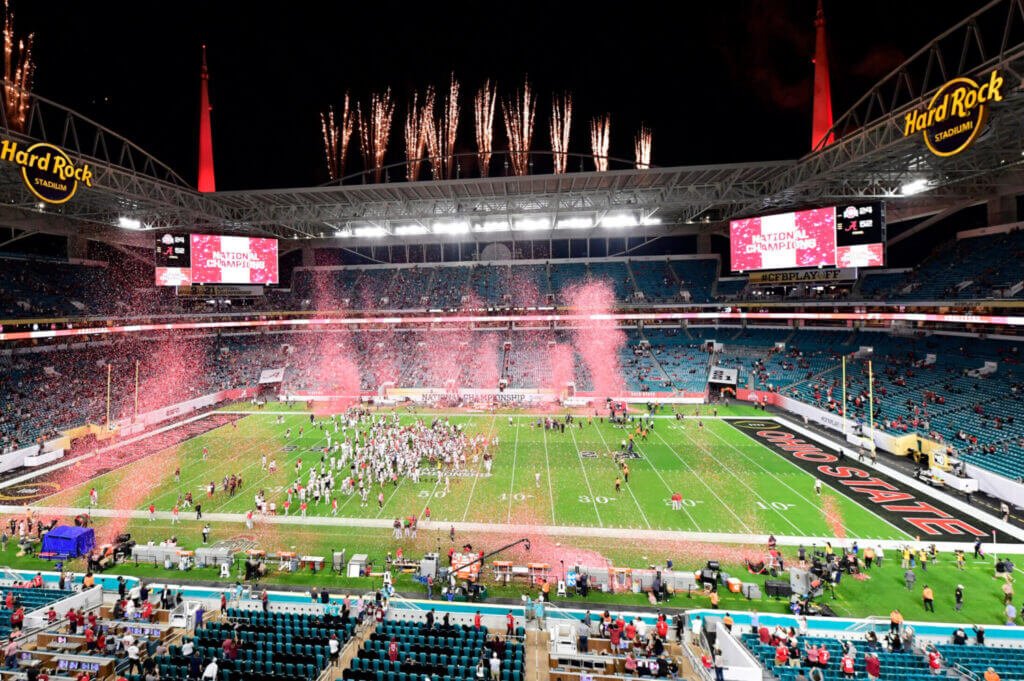 The College Football Playoff title game will return to Miami's Hard Rock Stadium in 2026, after hosting a pandemic-restricted version in 2021.

The sites for the 2025 and 2026 College Football Playoff title games have been announced.

The 2026 title game will take place at Hard Rock Stadium in Miami Gardens, Florida, the home of the Miami Dolphins. Miami also hosted the 2021 CFP National Championship, which Alabama won against Ohio State in front of a restricted number of fans because of the pandemic.

“We are delighted to be returning to Miami,” said Bill Hancock, executive director of the CFP. “South Florida was a great host for the 2021 national championship game despite the event having to be scaled back because of COVID-19, and we look forward to returning in 2026 with a full complement of events and activities during national championship weekend.

“The first-class stadium, convention center, hotels and supportive people in South Florida made the decision to return quite easy. The CFP National Championship has become one of the most popular sporting events in the United States in a short period of time, and we look forward to a terrific celebration in Miami in 2026.”

The location of the 2025 national championship game has also been confirmed with a press conference set for Tuesday, announcing Mercedes-Benz Stadium in Atlanta as the 2025 host site. The Atlanta Journal-Constitution first reported that decision.

Mercedes-Benz Stadium, the 75,000-seat, retractable-roof stadium, is home to the NFL’s Atlanta Falcons, Major League Soccer’s Atlanta United and the Peach Bowl. It will be the second time the venue has hosted the CFP title game, with the other coming in 2018 as Alabama beat Georgia in overtime.

The 2023 title game will take place in Los Angeles at SoFi Stadium, while the 2024 edition will be held in Houston at NRG Stadium.