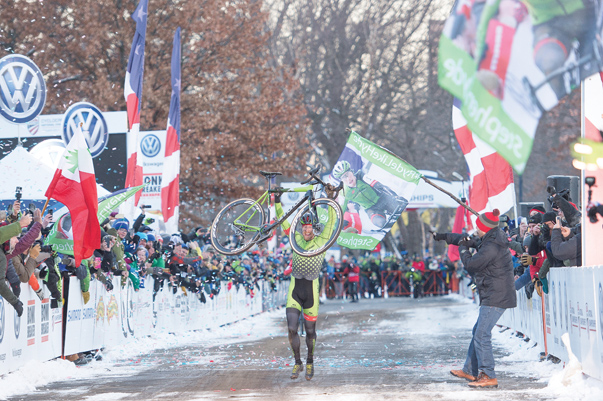 In cyclocross—a sport in which racers pedal cross-country and carry bikes across obstacles—competing over muddy, rutted courses in snow, ice and rain is considered an epically good time. By those standards, conditions were ideal for the 2017 USA Cycling Cyclocross National Championships, held in January in Hartford, Connecticut. “We had it all—we had rain that froze, then snow, then cold,” said Bob Murdock, director of sports marketing for the Connecticut Convention and Sports Bureau.

If you were a participant, “you were loving it,” said Micah Rice, vice-president of national events for USA Cycling. But for organizers and event staff, it wasn’t quite so fun. “It was a constant battle to keep the course in good shape,” Rice said. “After racing, we had to go out and stomp down the ruts.”

“It made for a classic New England event,” said Aidan Charles, founder of Connecticut Cycling Advancement Program, which helped stage the event alongside USA Cycling and Riverfront Recapture, the group that oversees the event venue, Riverside Park. “Mother Nature threw everything she had at us.”

On the night before the final day of competition, fiber optic cables that had been laid for live-streaming were cut by snowplows that came through to clear the area. The loss of the cable was costly for USA Cycling. Rice said in the future he’ll either run cable through trees or find wireless solutions.

The conditions also took a toll on event staff, many of whom were on the course long after events ended, preparing the course for the next day. Rice said virtually his entire event staff returned to the organization’s Colorado home with either a cold or the flu. “When we got back, we were just toast,” he said.

Then there was a generator that broke down and the struggle to keep water from freezing in the pressure washers used to clean bikes between races.

Despite those operational challenges, organizers say the event was a huge success. The nationals drew more than 108,000 views on USA Cycling’s YouTube channel, and more than 60,000 watched the broadcast live. “This is the best year we’ve had so far,” Rice said of the online viewing.

More than 1,700 racers signed up to participate, slightly down from the number in 2016 in Asheville, North Carolina, which Rice attributed in part to the North Carolina city’s reputation as a cycling destination. About 5,000 spectators attended the event, where admission was free.

Although some racers had worried Riverside Park might be too flat to offer real challenges, course designer Keegan Schelling created a devilish circuit. The defining feature was a steep berm dubbed Bonk Breaker Hill, where, Rice said, the best line of attack seemed to change from lap to lap.

The event was staged less than a mile from downtown Hartford, making city businesses accessible to fans and competitors. “We’d like to get into more urban spaces,” Rice said. “We were in the paper every day, and I think the city really embraced it.”

Organizers had hoped to book about 4,000 hotel room nights over the course of the event. Hartford and East Hartford have about 1,840 hotel rooms, according to Murdock.

“It was a huge success for us,” said Charles, whose group advocates for cycling throughout New England. “It set the scene for more cycling across the board.”