Tickets for the 2023 FIFA Women’s World Cup to be co-hosted by Australia and New Zealand will go on sale starting October 6, less than one year before the tournament begins on July 20, 2023.

The first-ever co-hosted women’s tournament will have 32 teams competing in 64 matches across nine host cities and 10 stadiums. Ticket sales on the FIFA website will begin with an exclusive Visa ticket presale for individual match tickets and multi-match packages from October 6–12 before multi-match packages go on sale to the general public from October 13–21. Once the draw is held October 22, single match ticket sales begin with another exclusive Visa ticket pre-sale period October 25 before all fans will be able to secure tickets starting November 1.

“As the first FIFA Women’s World Cup to be held in the southern hemisphere and the first-ever edition to feature 32 teams, the FIFA Women’s World Cup Australia & New Zealand 2023 will truly be a tournament of firsts, providing an important platform to inspire fans and create a new generation of role models through football,” FIFA Secretary General Fatma Samoura said. “With just over nine months to go until the FIFA Women’s World Cup 2023 kicks off and tickets affordably priced for everyone, we look forward to giving fans a chance to be part of another incredible celebration of football next year and seeing women’s football go Beyond Greatness in 2023.” 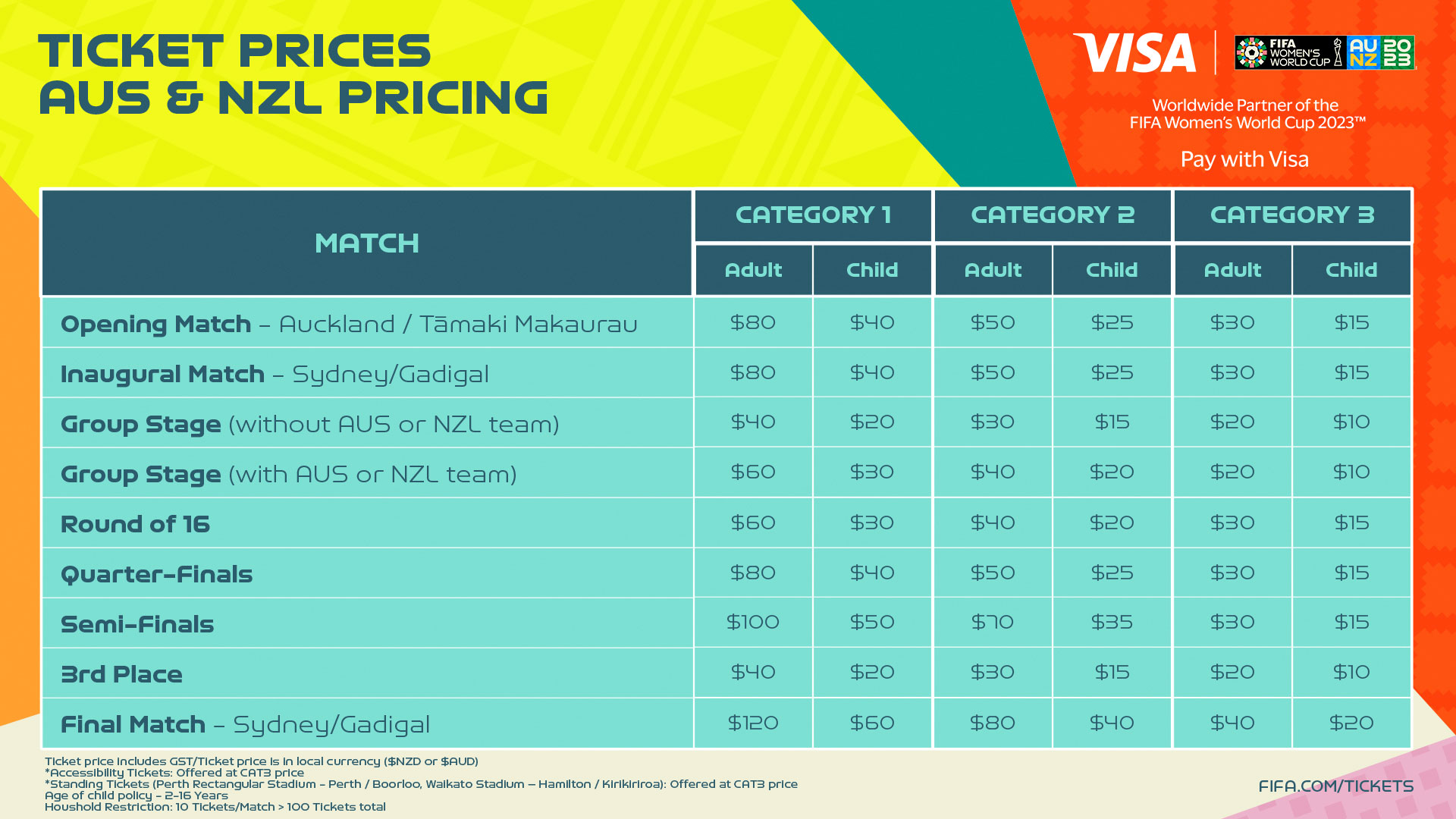 Prices start at AUD/NZD$20 for adults (about $22.78 US) and AUD/NZD$10 (about $11.40 US) for children for single match tickets. Tickets will be sold on a first-come, first-served basis during these ticket sales periods. The last-minute sales phase for the tournament will kick off in April 2023; around one million tickets will be on sale during the first sales period for the competition,

“The FIFA Women’s World Cup 2023 in Australia and Aotearoa New Zealand will be an incredible and hugely exciting moment for fans from across the host countries and around the world,” FIFA Chief Women’s Football Officer Sarai Bareman said. “As qualification reaches its final stages ahead of next month’s Draw in New Zealand, we are excited to reveal ticketing details for the tournament today, including when fans will get the first chance to secure their seat at next year’s FIFA Women’s World Cup.”