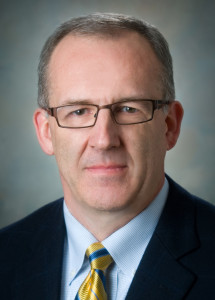 Greg Sankey has been named commissioner of the Southeastern Conference by the presidents and chancellors of the SEC. Sankey, in his 13th year as a member of the SEC staff, has served as executive associate commissioner and chief operating officer since 2012. He will succeed Mike Slive, who has served as SEC commissioner since 2002 and who announced in October that he will retire effective July 31, 2015.

“The institutions of the Southeastern Conference searched for a commissioner who would carry forward the momentum of success enjoyed by the SEC over the last decade while also possessing a vision for change in the modern era of college athletics,” said Nick Zeppos, chancellor of Vanderbilt University and president of the SEC presidents and chancellors. “Greg Sankey’s experience with our institutions, his respect on the national landscape, his understanding of the balance of athletics and academics, and his passion for the welfare of student-athletes make him the perfect leader for the SEC.”

Sankey becomes the eighth commissioner in the conference’s history. He has been an integral part of the SEC’s efforts to reshape the league’s governance, enforcement and compliance program, and has also directed the SEC’s championships staff. Sankey is also active within the NCAA committee structure, which includes his current service on the Division I Legislative Council, Committee on Academic Performance and the NCAA Committee on Infractions for which he currently serves as chairman.

“The universities of the SEC represent the greatest combination of academic and athletic excellence and I am honored to be selected to follow Mike Slive as commissioner of the Southeastern Conference,” Sankey said. “The SEC is poised to make a difference in the lives of student-athletes for generations to come. We must ensure that the lessons they learn from their achievements in competition and in the classroom translate into success in life after college.”