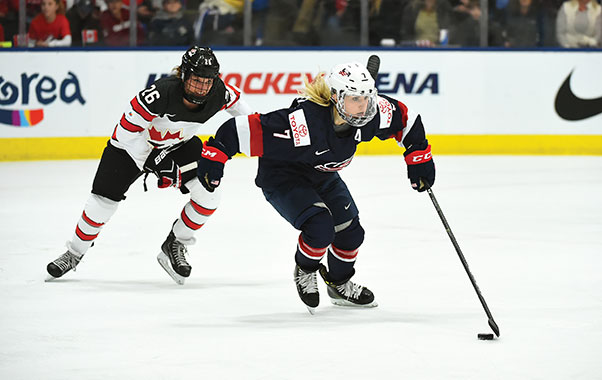 When Hilary Knight of the U.S. team scored in the winning goal in overtime in the gold medal game to beat Canada 3-2, the IIHF Women’s World Championship came to a thrilling—though not unexpected—conclusion. The United States won the tournament for the fourth straight time and seventh in eight years.

There was nothing usual or expected, however, about the run-up to the eight-day international tournament for the team or for USA Hockey, its parent organization. As final preparations were underway, a simmering financial dispute boiled over when the U.S. team threatened to boycott the event, demanding a new contract. The announcement came on March 15, a little more than two weeks before the March 31 start in Plymouth, Michigan, at USA Hockey Arena. After tense negotiations, the sides settled on March 28, leaving three days for the team to prepare for competition and for the governing body to ramp up stalled ticket sales and try to turn attention back to on-ice play.

Knight’s goal before a raucous, standing-room-only crowd helped smooth things over but could not erase the bad feelings lingering from the pre-championship conflict. While USA Hockey was able to survive the public relations hit it took, it was too late to save attendance at the event. The overall attendance of 20,034 for 22 matches—an average of 911 per game—was the second-lowest in 21 years for the event, which was first held in 1990 and became an annual event in 1999.

When the boycott was announced, “it stopped all ticket sales,” said Dave Fischer, senior director of communications for USA Hockey. “It certainly had a significant impact. We were at a 100 percent halt.” Fischer also said USA Hockey offered refunds to patrons after the potential boycott was announced so as not to further damage relationships.

The Detroit Sports Commission, although only indirectly involved in the marketing, continued to promote the event through the uncertain times. “For us, it was full speed ahead,” said Kris Smith, the commission’s director. “Our job was to push forward to do what we could.” That included hanging a large banner at the airport, providing signage to guide competitors, and installing billboards in several languages to welcome and thank the international teams.

Many of the fans who did attend were girls and young women who were playing in the Toyota/USA Hockey Girls’ and Women’s National Championships, held April 6–10 in the Detroit area. Fischer and Smith said that having the international event run concurrently with the nearby USA Hockey national events was a highlight of the tournament. “There were a lot of kids involved,” Fischer said, playing exhibitions between the periods of the international games, attending autograph sessions and gathering near entrances and exits to high-five the elite players.

Despite Detroit’s reputation as Hockeytown USA, there is little women’s or intercollegiate hockey in the area, so seeing the U.S. team was a rare experience. “What USA hockey did was invaluable for a growing segment of athletes,” Smith said.

For Detroit, the inclusion of the national championships, which featured about 100 teams, was an important element. “To have two or three national championships for women, that helped create excitement,” Smith said, and it paired well with the girls’ event. “The vision USA Hockey had to put those together was right on.”