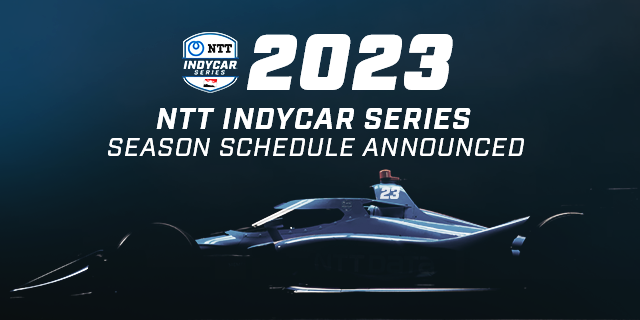 The 2023 IndyCar Series will have 17 races throughout the United States, 13 on NBC, with the circuit starting in Florida and finishing in California.

The 2023 season opens March 5 on the streets of St. Petersburg, Florida. The 107th Indianapolis 500 presented by Gainbridge will take place on May 28 and the season ends September 10 at WeatherTech Raceway Laguna Seca in Monterey, California. The schedule includes a stretch of eight races in the final nine weeks of the season.

“The NTT IndyCar Series is on an impactful upward trajectory, making progress at a pace that befits our thrilling style of competition,” Penske Entertainment Corp. President and Chief Executive Officer Mark Miles said. “The 2023 season provides an opportunity to further build on this trend, bringing our sport and its stars to more markets and households and reaching new consumers across the globe.”

Drivers will compete in seven road course races, five street circuit events and five oval races. Along with longtime road course races in St. Petersburg and Long Beach, the 2023 schedule includes two events at the Indianapolis Motor Speedway’s road course, a return to street racing in Toronto and Nashville and a new street course in Detroit on June 4. The debut of the Streets of Detroit circuit is a move to the downtown site from its previous location at Belle Isle Park with the nine-turn, 1.7-mile street circuit providing access of more than half of the event’s footprint to the public. It is also a connection to the event’s heritage, which began on the downtown streets of Detroit in 1982.

“We have worked hard to achieve date and venue equity, which has been an ongoing goal,” IndyCar President Jay Frye said. “We are excited to return to downtown Detroit and the repaves at Road America and WeatherTech Raceway Laguna Seca will add new challenges for the drivers and teams. The intensity level will also be at an all-time high as we conclude the season with three weekends in a row.”

For the fourth time in 50 years, the series will have 13 or more races on network television in the United States. Along with 13 races on NBC, there will be three races on USA Network while the Toronto race on July 16 will air on Peacock. Peacock also will present live simulstreams of all races on NBC and USA Network, as well as live coverage of all qualifying and practice sessions.

“We’re very excited for our 2023 NTT IndyCar Series schedule and to build on this past season’s viewership milestones,” said NBC Sports Vice President of Programming Mike Perman. “In providing comprehensive coverage across NBC, Peacock and USA Network, NBC Sports is once again looking forward to telling the stories of these world-class drivers and this compelling series.”