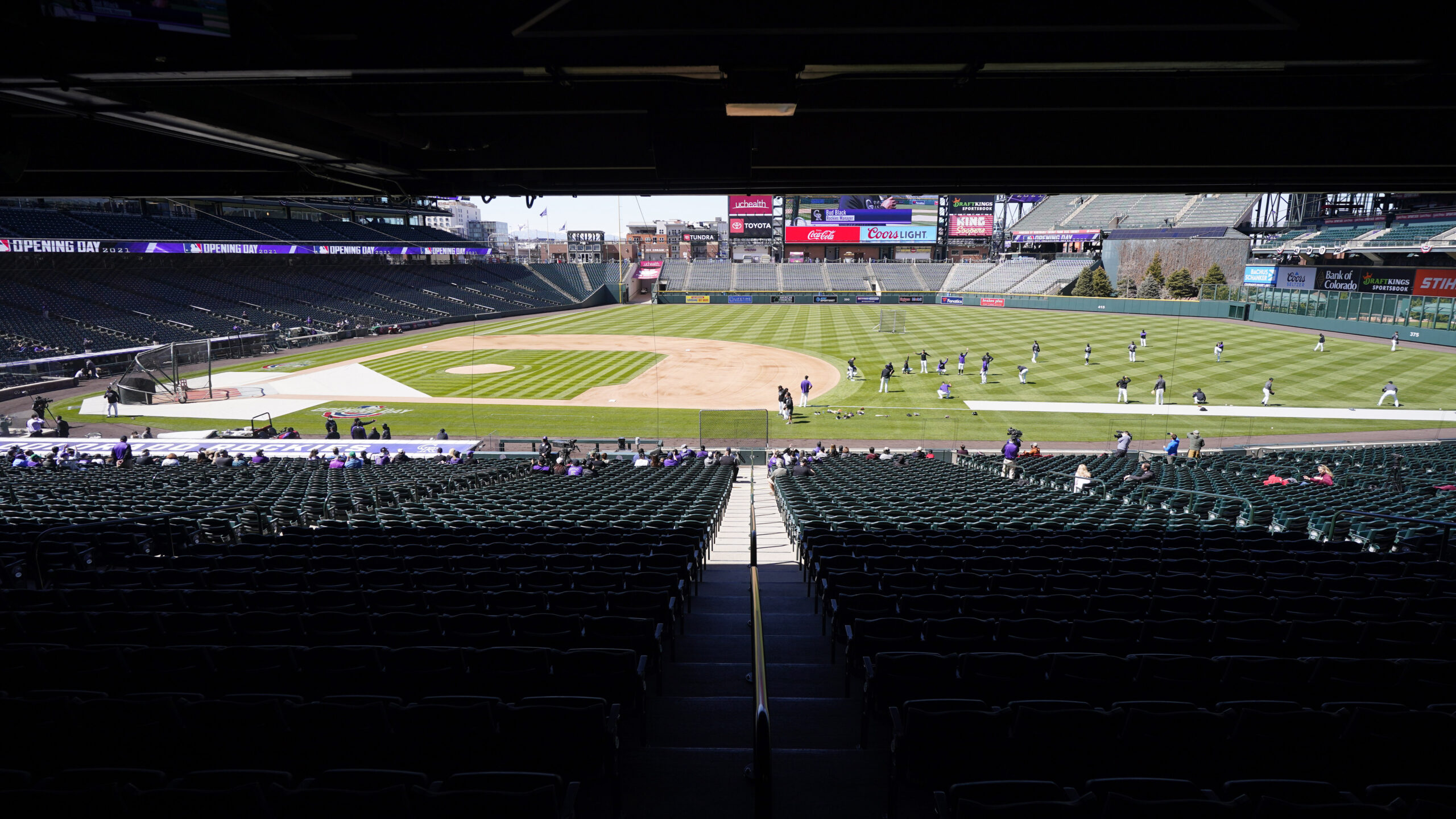 The Colorado Rockies warm up for practice on March 31 in Denver. A small number of fans were allowed to watch the Rockies go through a workout Wednesday, the day before the opening-day game between the Rockies and the Los Angeles Dodgers. (AP Photo/David Zalubowski)

In a year in which Major League Baseball has tried to deaden the baseball slightly in an attempt to have fewer home runs and bring more strategy into the game, the league will bring its Midsummer Classic to a venue that is known for some long balls leaving the park.

Major League Baseball has announced that Coors Field, home of the Colorado Rockies, will be the new host of this season’s All-Star Game on July 13. MLB said in a statement released Tuesday morning that the Rockies were selected because it was already in the bidding process to host a future All-Star Game.

“Major League Baseball is grateful to the Rockies, the City of Denver and the State of Colorado for their support of this summer’s All-Star Game,” MLB Commissioner Rob Manfred said. “We appreciate their flexibility and enthusiasm to deliver a first-class event for our game and the region. We look forward to celebrating our sport’s best players and entertaining fans around the world.”

Denver last hosted the 1998 All-Star Game as the American League won 13-8. Major League Baseball announced last Friday it was moving the game from Atlanta after a new law in the state of Georgia was passed that includes restrictions on voting by mail and greater legislative control over how elections are run.

“We are excited to host this year’s All-Star festivities at Coors Field,” said Rockies Chief Operating Officer Greg Feasel. “We are confident that our organization along with the city, state, Visit Denver and the Denver Sports Commission are capable of putting on this premier event in a relatively quick time frame because of the preparations that had already been done. Summer in Colorado is something everyone in the country should experience, and we embrace this opportunity to show off our beautiful ballpark and everything our city, state and region have to offer.”

Denver also has more than baseball reasons for being the new host. McGregor Square, a new 659,000 square-foot, mixed-use development across the street from the ballpark, opened up in March with a hotel, condos, restaurants and retail space along with an outdoor plaza.

Colorado is politically the opposite of Georgia, allowing people to vote through mail and people were registered via automatic registration. Colorado Governor Jared Polis, when elected in 2018, became the first openly gay person to be elected governor of a state. Polis had been campaigning for the game to be moved to Denver soon after MLB’s decision to move the game out of Atlanta was announced.

“The Governor knows that Colorado is the best home for the All-Star Game, especially because Colorado also has strong laws that enable voters to cast their legal ballots any way they choose including through mail or in person,” said Shelby Wieman, a spokeswoman for Polis, over the weekend. “The Governor will be burning up the phones the next few days to see if there is an opening to bring the All-Star game to Denver.”