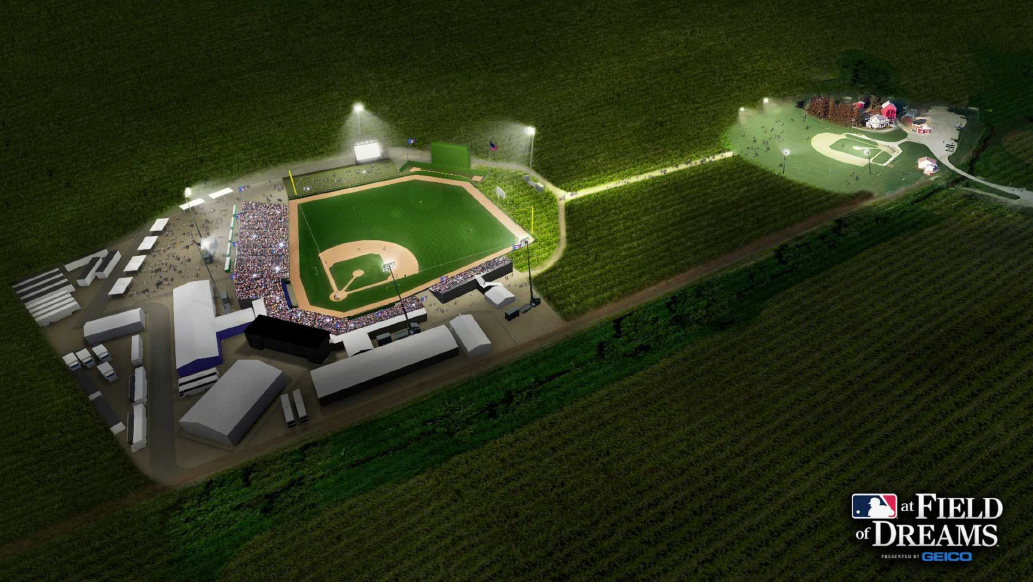 If Major League Baseball builds a temporary 8,000-seat ballpark in the middle of an Iowa cornfield, will people come? That’s what MLB will find out on August 13, 2020, when the Chicago White Sox and New York Yankees play a regular-season game in Dyersville, Iowa, at the site of the movie “Field of Dreams.”

The event—“MLB at Field of Dreams”—will be the first MLB game held at the movie site, which has become a tourist attraction in its own right, and the first to be held in the state of Iowa. The game will be presented by GEICO and will be part of the GEICO Summer Series, which will include a game between the Boston Red Sox and Baltimore Orioles on August 23, 2020, in Williamsport, Pennsylvania, home to the Little League World Series.

For the Iowa game, a temporary stadium will be built near the farm that was a central part of the movie, which came out in 1989. A pathway through a cornfield will take fans to the temporary stadium, which will overlook the movie location. The right field wall will include windows to show the cornfields beyond the ballpark and aspects of the design will reflect Chicago’s Comiskey Park, the White Sox home from 1910–1990, including the shape of the outfield and bullpens beyond the center field fence. Construction on the venue will begin later this month.

“As a sport that is proud of its history linking generations, Major League Baseball is excited to bring a regular season game to the site of ‘Field of Dreams,’” said MLB Commissioner Rob Manfred. “We look forward to celebrating the movie’s enduring message of how baseball brings people together at this special cornfield in Iowa.”

The game will be aired on Fox and will count as a White Sox home date.

“Field of Dreams captures the uniqueness of Iowans’ can-do attitude, and there’s no better place to host our state’s very first Major League game than this legendary baseball field in Dyersville,” said Iowa Governor Kim Reynolds.  “As the famous movie quote goes, ‘Is this heaven?’ ‘No it’s Iowa.’ Iowa’s truly a land of opportunity, where you can work hard, dream big and anything can happen. I look forward to this historic event in 2020.”