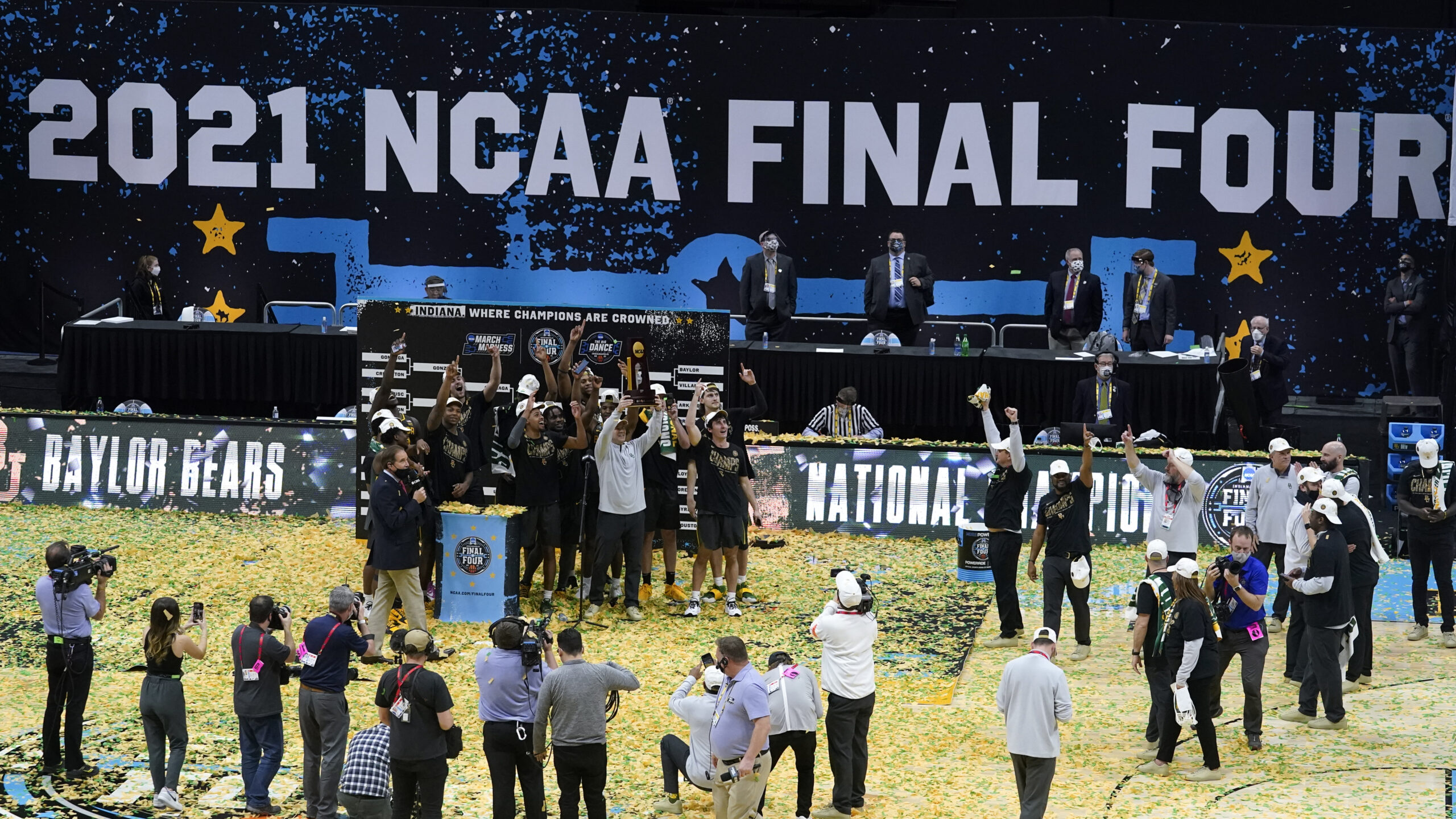 Baylor players and coaches celebrate after winning the championship game against Gonzaga in the men's Final Four on April 5, 2021, at Lucas Oil Stadium in Indianapolis. Baylor won 86-70. (AP Photo/Darron Cummings)

The highly-anticipated gender equity review by Kaplan Hecker & Fink LLP of how the NCAA conducts its championship events has included one recommendation that would raise eyebrows among those in the sports travel industry: Combining the Division I Men’s and Women’s Final Fours into one single location by no later than the 2022–2023 season.

The review said ensuring the men’s and women’s tournaments provide the same experience for players to have it in the same city because “in light of the structure of the NCAA’s existing broadcast and sponsorship contracts, however, there is no realistic way to obtain the same level of corporate sponsorship and promotional synergies at a separate women’s championship in a separate city.

“It’s worth a shot,” Connecticut coach Geno Auriemma told The Associated Press of a joint Final Four weekend. “It’s been done successfully with tennis and the Olympics. Will there be enough coverage spread around that no one gets lost in the shuffle there? That’s the question.”

[Read the Full Report Here]
The idea of a combined Final Four weekend was first suggested in a 2013 white paper prepared by the current Big East Commissioner, Val Ackerman.

“While there certainly would be a more limited number of cities in the United States capable of hosting combined Final Fours, both Houston and Dallas, which are scheduled to host the 2023 men’s and women’s Final Fours, respectively, are capable of hosting such a combined event,” the review stated. “Moreover, our independent media expert has strongly recommended implementation of this recommendation by the 2023 championship, because it would “generate significant incremental value for the [Division I Women’s Basketball Championship] immediately and thus provide the NCAA with a tremendous strategic advantage heading into its ESPN renewal discussion.”

Along with if the NCAA would adopt the recommendation, the question is when it would do so — whether in the timeline suggested by the review or later. The NCAA this past summer announced the results of its bid cycle for hosting championship events through 2026, including the men’s and women’s Final Fours;

The NCAA Women’s Division I Tournament also planned a revamping of its regional setups starting in 2023 with two sites hosting eight teams apiece instead of four regionals with four teams apiece like the men’s tournament.

“We understand that the NCAA has made commitments to host cities for multiple years, and this recommendation will require the NCAA to work with those host cities to make changes to their plans based on the serious and shared value of promoting gender equity,” the review said. “It is critical, however, to make this change and to do so quickly to take advantage of the current momentum, to demonstrate the NCAA’s significant commitment to change, to garner the significant benefits to the women’s Final Four described above, and to capture the strategic value that combined Final Fours could yield for future contract negotiations.”

The rest of the report was nothing less than an embarrassment for the NCAA. The review concluded that the organization prioritized the Division I men’s basketball tournament “over everything else” after the firm was hired in March upon reporting showcased how the NCAA failed to provide similar amenities to the teams in the men’s and women’s Division I basketball tournaments. Other complaints surfaced at the women’s volleyball tournament in Omaha, Nebraska and the Women’s College World Series in Oklahoma City.

The report noted disparities were not confined to this year’s tournaments: Kaplan said NCAA’s structure and systems “are designed to maximize the value of and support to the Division I Men’s Basketball Championship as the primary source of funding for the NCAA and its membership” while the women’s tournament is part of a package with more than two dozen other NCAA championships that ESPN owns and pays about $34 million per year for through 2023-24, even though an assessment done for Kaplan by a team of sports media and marketing experts showed the women’s tournament will be worth between $81 and $112 million annually beginning in 2025.

The report criticized the NCAA for failing to recognize or prepare for that growth in value and said revenue generated by the men’s tournament’s media deal leads to that event being prioritized “over everything else in ways that create, normalize and perpetuate gender inequities.”

Kaplan also recommended using the March Madness branding for the women’s tournament and expanding the field from 64 to 68 teams to match the size of the men’s bracket.

The revenue generated by the CBS/Turner deal is distributed back to schools by the NCAA, a large portion in “units” earned by conferences based on the tournament performance by individual schools. A similar distribution is not done for the women’s tournament, but Kaplan suggested using a similar model could prompt schools to spend more to improve women’s basketball programs.