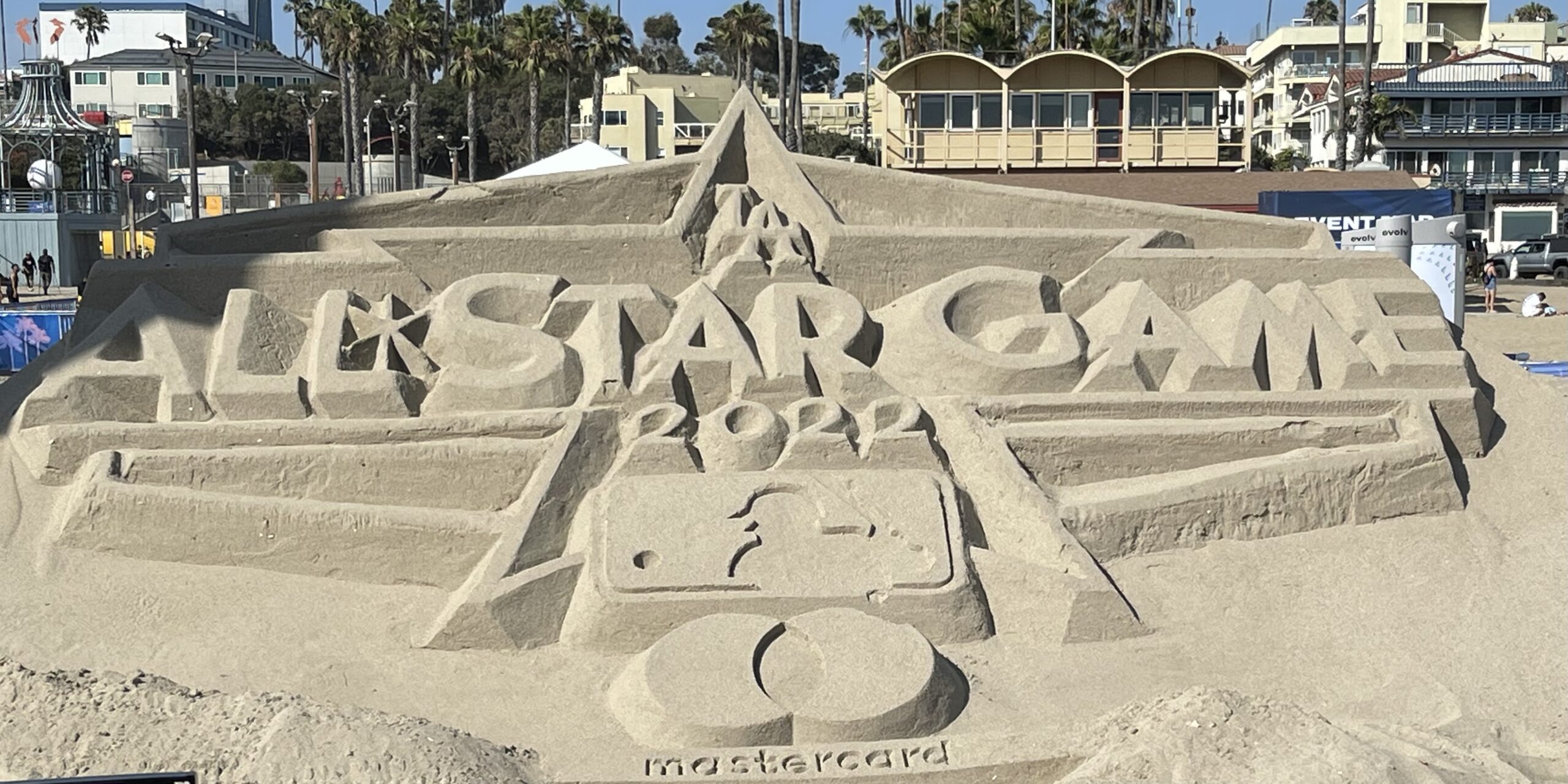 The Major League Baseball All-Star Game is a near weeklong star-studded extravaganza celebrating everything the sport has to offer. While the July 19 game itself at Dodger Stadium may have been the highlight, the event’s footprint continues to grow — this time to the beach as well.

The MLB Draft (also held during All-Star week), Home Run Derby and All-Star Game are the televised events, but there was plenty going on behind the scenes as MLB tried to rein in the sport’s younger generation and create new fans.

The 2022 All-Star festivities took place in the entertainment capital of the world, Los Angeles, so it makes sense that the fan activations went all out.

The hub of activity — outside of the confines of Dodger Stadium — was just down the road at the Los Angeles Convention Center, where tens of thousands of square feet of baseball utopia were set up for fans of all ages.

Of the dozens of activations, the one with the consistently longest line was the virtual reality setup. Young children and adults alike got a taste of what it’s like to compete in a home run derby by putting on the headset and swinging a real bat.

“This is the future of video games, and probably sports viewing,” one of the engineers of the VR exhibit said.

It’s easy to see why VR is so popular. As sports leagues attempt to give fans access as close to the field/court as possible, VR takes everything to a new level.

“This is cool because anyone can play and it’s an even playing field,” one of the teens in line explained.

That theory was proven right immediately, as an 11-year-old girl posted one of the top five scores of the entire day — for all ages — just moments later, earning a backpack filled with MLB goodies as her prize.

Next to the VR setup was the MLB The Show 22 area, which included dozens of TVs setup up with Xboxes for fans to get a taste of the unbelievable graphics and lifelike presentation of the video game.

The age demographics for both the VR and Xbox activations must be an encouraging sign for MLB as it pushes to make the sport more interesting and marketable to a new wave of fans. The kids playing had to be pried away from the controllers by parents.

The Home Run Derby mode made for a quick, fun chance to experience the game without having to play all nine innings. After all, home runs sell tickets.

There were several other areas of the convention center that allowed kids to swing a bat and make contact with a real ball — not a virtual one.

Hyperice — a company that makes high-end wellness and recovery devices for athletes — sponsored a tee-ball area where kids could crank a ball and have a computer measure all the components of the swing and give an instant analysis.

The Geico Play Ball Park was an actual replica field created with synthetic material which hosted dozens of kids each day as they took instructions from baseball and softball players. The variety of activities included throwing, catching and hitting as parents looked on and took pictures.

Speaking of pictures, MLB made sure there were plenty of photo ops available to create a lasting memory.

T-Mobile created the “Flip Your Bat” area where an epic flip was encouraged on video after hitting an imaginary walk-off home run. Hankook Tire brought a “Selfie Wall,” which was pretty self-explanatory and created a unique baseball card of patrons’ favorite poses.

Chevrolet brought several of its newest car and truck models for display, as well as a large video board that played both highlights of baseball and of the vehicles, while Gatorade handed out samples of its newest drink, “Gatorlyte.” (It was pretty good). Capital One activated a mock MLB clubhouse, complete with player lockers filled with memorabilia. The area also served as a place for guest speakers from the baseball world throughout the day.

In addition to all of the activations in the Convention Center, a few miles west on Interstate 10 had baseball mixed with sun and sand.

The Santa Monica Pier — always a bustling hub of activity — played host to the secondary fan engagement area. A large section of the pier was transformed into a baseball-themed party, complete with a concert stage and live music, vendors and another large activation for MLB The Show, which was equally packed as the one downtown.

After getting some swings in, the kids could then move over to the throwing challenge to test their arm strength and accuracy. A small stadium was set up on the sand, which was used for instructions and story time for kids. There was also a Roberto Clemente tribute taking place, where the kids could learn of the great player and humanitarian.

And of course, an activation on the beach wouldn’t be complete without some sand sculptures. There were several, which took several hours to construct and perfect, offering the perfect selfie opportunity on the beach.

Overall, MLB hit a grand slam when it came to fan activations throughout the week in Los Angeles. Most important, the activities attracted a large youth presence, which the sport has been chastised for not focusing on over the past several years.