The seventh of eight venues for the FIFA 2022 World Cup in Qatar has been completed with Stadium 974 ready to hold its inaugural event next week.

The stadium that is made primarily from shipping containers and seats 40,000 will host the FIFA Arab Cup with matches starting November 30 as Syria and the United Arab Emirates play. It is the first fully demountable stadium in FIFA World Cup history, with its name reflecting the number of shipping containers used. The venue will host seven matches up to the round of 16 stage during Qatar 2022. During the FIFA Arab Cup, it will host six matches including a semifinal and third-place game.

The Stadium bowl avoids the need for air conditioning as it is naturally ventilated. Much of the stadium’s structure is made from recycled steel, while water efficiency methods ensure it will reduce water use by 40 percent compared to a conventional stadium. QR codes on the containers mean even after the tournament, fans will be able to trace the paths the stadium’s pieces take around the globe. 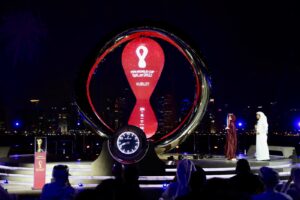 Lusail Stadium, the 80,000-capacity venue that will host the Qatar 2022 final, is to soon become the final arena to open in the coming weeks. The 2022 FIFA World Cup starts November 21 and to mark there being less than one year to go, the Official Countdown Clock, powered by Hublot, was unveiled at Doha’s Corniche Fishing Spot. The structure is designed to be seen from any angle and reflect the view of the city skyline behind it as it ticks down through every hour, minute and second to the opening game at Al Bayt Stadium.