Home > Baseball > U-18 Baseball World Cup Gets Through Challenges 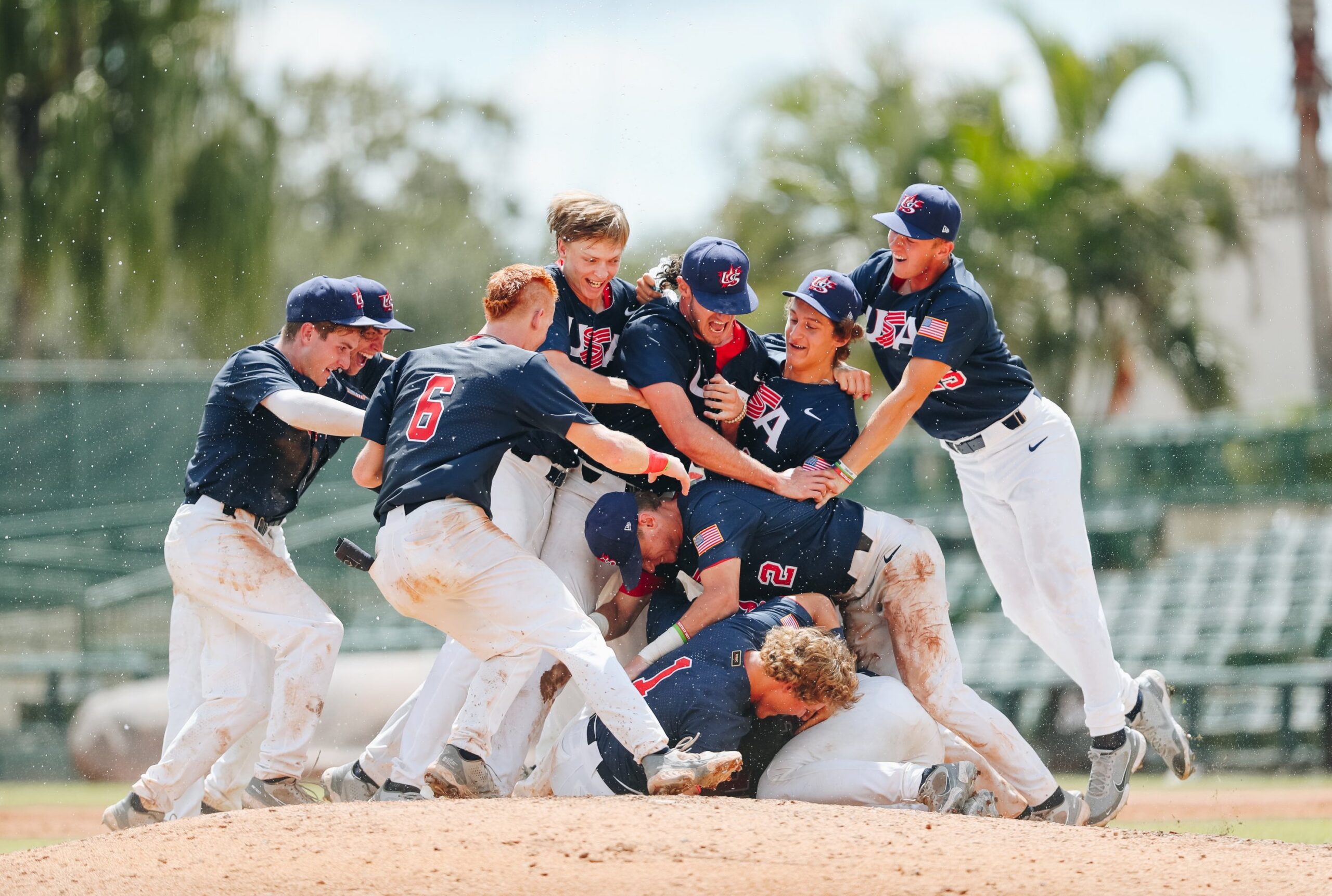 USA Baseball celebrated a win in the gold medal game of the U-18 Baseball World Cup in Sarasota, Florida. Photo by World Baseball Softball Confederation

Russ Yurk stood proudly and watched the scene unfold before him. He pulled his cell phone out to snap a picture. Like a proud father, he felt a sense of accomplishment.

Organizing an international baseball tournament is challenging. Doing it twice in two years might cause most tournament managers to have a nervous breakdown.

By the time the U-18 Baseball World Cup finally saw its first pitch on September 9, 2022, Yurk wasn’t thinking about pandemics or logistics. He simply wanted to see a baseball diamond come to life.

Yurk has been the man in charge of organizing the 2021 version of the international baseball tournament — sanctioned by the World Baseball Softball Confederation for players 18-years-old and younger — for several years. There was additional pressure, as this was the first time the U-18 Baseball World Cup had been hosted in the United States since 1995.

“It was a challenge,” Yurk said. “Going into the spring of 2021, so about a year and a half ago, I think there was an underlying anticipation that a postponement was going to happen. Logistically, some of the challenges were the obvious things. We had to rebook hotels, rebook buses, rebook the facilities. On the hotel front, things have gotten more expensive. A couple of our partners were able to keep us at our price point and a couple had to go up a little bit. But it was still money that wasn’t necessarily budgeted for many years ago.”

These are the types of things that keep event organizers awake at night. The pandemic wreaked havoc on the event industry for nearly two years, and Yurk joined thousands of others around the world in participating in a juggling act of epic proportions.

The 2021 U-18 Baseball World Cup was slated to take place in September 2021 in a joint bid between the Florida cities of Bradenton and Sarasota. Visit Sarasota County and the Bradenton CVB worked with Yurk to move everything back one year, which was no small feat.

“Both cities were hugely helpful,” Yurk said. “We had a number of great bids here domestically for this event, but Sarasota and Bradenton being so close together helped. I was working on the 2017 world rowing championships and got to see the cooperation between the two communities. The fact that they work together all the time was one of the big reasons why they were eventually the host selected by the International Federation for this event.”

“Be it on big events or small events, there’s a level of cooperation between Bradenton and Sarasota,” Yurk said. “They have different venues that support different things, and some of their hotels are right on the line, depending on which side of the road you’re on. So, they worked really well together. Same with the baseball clubs. There was really never a hesitation when it came time to postpone. It was like, ‘we’ll get it done.’”

More than 30 months after the pandemic started, Yurk and organizers still had COVID protocols to deal with. After all, there were 12 teams coming to Florida from around the world, all coming from different levels of vaccination and testing. Once all the teams gathered, the Florida weather took its turn playing spoiler, forcing several days of action to be postponed.

“For the two CVBs, I think it was definitely a successful event,” Yurk said. “From an attendance standpoint, we struggled. We dealt with a significant amount of rain over the 10 days — beyond the normal afternoon Florida thunderstorms. We just found ourselves in a weather pattern where the rain just kept circling in off the Gulf. The tarp came out plenty and we never could get into a rhythm. But on the last day, we had a really nice turnout for the gold medal game.”

As it turned out, the U-18 Baseball World Cup did catch one break: “We’re fortunate we were able to conclude our event before Hurricane Ian impacted the west coast of Florida,” Yurk said. “We hope all of our partners and their families are safe and that the impact to the area is minimal.”

Focusing on the field

For all the postponements, strife and uncertainty that had led into this tournament, there was a golden lining for the United States supporters.

After completing a dramatic rally to defeat Japan on a walk-off hit and advance to the gold medal game, the U.S. squad had to regroup quickly as the title matchup with Chinese Taipei began 40 minutes later before more inclement weather rolled in. The U.S. side won the gold medal game 5-1 and Bryce Eldridge of Vienna, Virginia, was named MVP of the tournament.

“Forty minutes later the U.S. kids had to regroup and get after it with a really good Chinese Taipei team who they’d already lost to earlier in the tournament,” Yurk said. “It was an emotional roller coaster for sure. There was a really great celebration when that gold medal was secured after the final out.”

Several players who have participated in the U-18 Baseball World Cup have gone on to stardom at the professional level including Japan’s Yu Darvish, United States’ Clayton Kershaw, Francisco Lindor and Buster Posey, and Cuba’s Yasiel Puig and Aroldis Chapman.

“These kids come from all over the U.S. and are high-level college commits, and many of them will get drafted next summer,” Yurk said.

There’s little rest for the weary, as Yurk now turns his focus to the next NCAA bid cycle. Yurk is the president and founder of 129 Sports, an Indianapolis-based event and project management company. He will lead the NCAA’s bid cycle with the awarding of events from the 2026–2027 school year through 2029–2030; the bid process for that cycle begins in 2023.

As he takes a look back at the U-18 Baseball World Cup, from attending the 2019 event in South Korea to organizing the 2022 tournament and seeing the U.S. celebrate a gold medal, Yurk hopes through all the turmoil a precedent was set.

“This was the first time for USA Baseball to host this tournament — or really any tournament since the mid-90s,” Yurk said. “I think the thing we were hoping to accomplish was to try to find that model, that proof of concept, to make hosting an event like this viable in the U.S.”