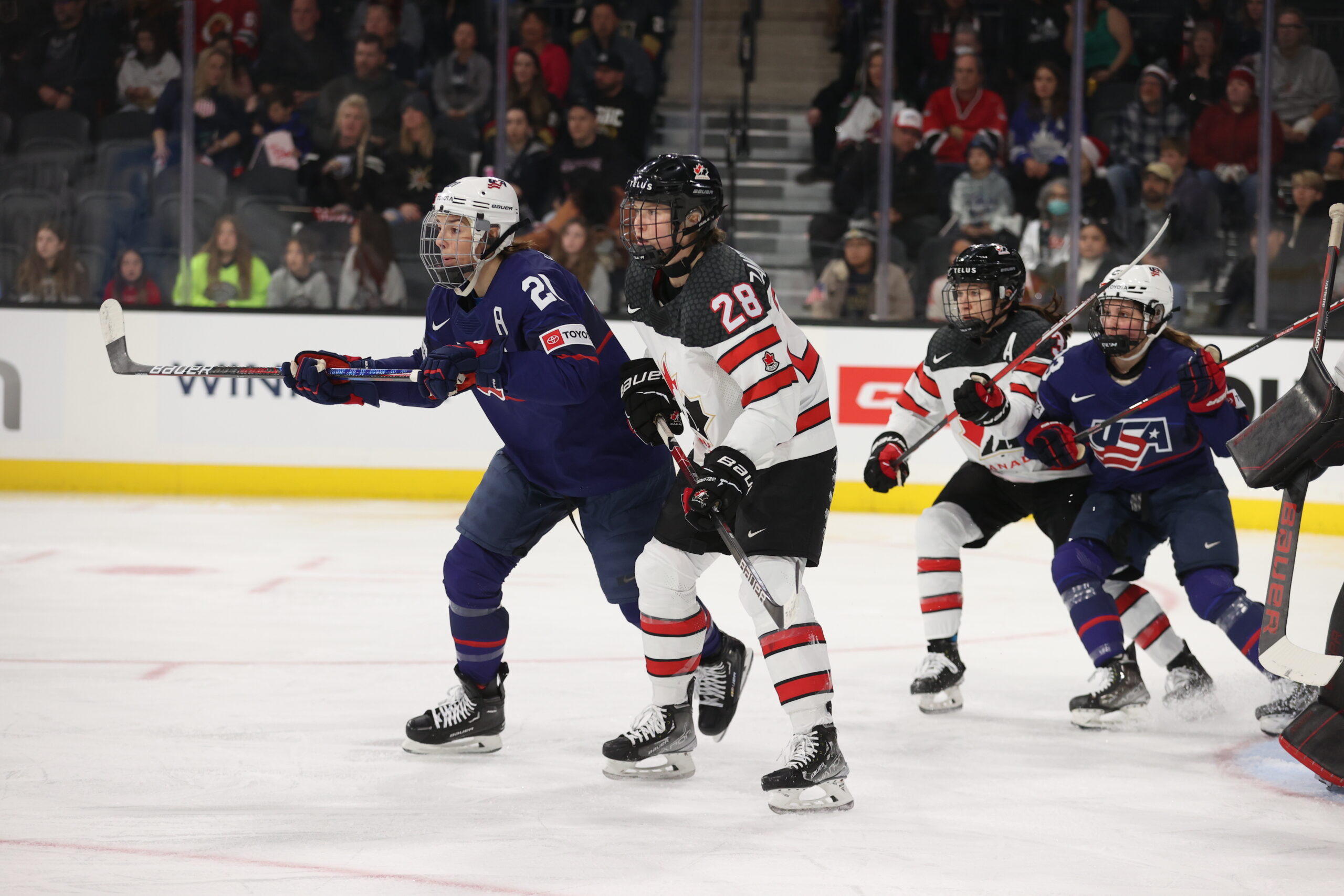 Team USA's Hilary Knight battles with Team Canada's Micah Zandee-Hart in front of the Canadian net during the Rivalry Series on December 15. Photo by USA Hockey

As with other women’s sports, USA Hockey has seen an explosion with its women’s national team in recent years.

It used to be fans could only see the U.S. women’s team play in exhibitions around the time of the Olympics. Now, that’s all changed with the Rivalry Series.

Team USA and Team Canada have had the two best women’s hockey programs in the world for several years. Now, the rivals promote the sport by competing in a series of seven games around North America.

The fourth installment of the 2022–2023 Rivalry Series made its way to the desert on December 15 when the teams clashed at the Dollar Loan Center in Henderson, Nevada, outside of Las Vegas.

“The facility is absolutely beautiful. It’s brand new and has every amenity you could ever ask for,” said Tony Driscoll, assistant executive director of marketing, communications and events for USA Hockey. “This part of the country has been growing fast for us in girls’ hockey ever since the Golden Knights came here. It’s absolutely exploding on the youth scene and so to showcase our best women’s players in the world and grow the game is important. This market makes sense and has been very welcoming for us.”

The U.S. side lost a hard-fought battle 3-2, but holds a 3-1 lead so far in this year’s series. This was the second game in the United States, as Team USA won 4–2 in Seattle on November 20. The two previous matchups in November — both in British Columbia — were one-goal victories for the Americans.

“The competition is every bit where you would expect it to be between these two teams,” Driscoll said. “There’s not a lot of love lost between the two of them. There’s a lot of physicality and chirping, so there’s not much of a drop-off between the Olympics and these Rivalry Series games.”

While it was a clear home-ice advantage for the U.S. in Las Vegas, there was a decent Canadian presence also in attendance at the home of the Henderson Silver Knights, the AHL affiliate of the Vegas Golden Knights.

“Playing here is fun. Everyone here is extremely ecstatic about hockey and you see it everywhere with the Golden Knights on every T-shirt and sticker,” said Hilary Knight, who scored one of the U.S. goals on a breakaway in the third period. “It’s wonderful how hockey has hit the town and it was great to see the ground swell of support here tonight and hopefully there are more regular stops here to come.”

While these games are technically exhibitions, they also serve as a way for the teams to prepare for the upcoming 2023 Women’s World Championship next April in Brampton, Canada.

“We want these players to have the opportunity to showcase themselves, but at the same time stay prepared for the world championship events,” Driscoll said. “This is all in advance of preparing us for the world championship and is a great opportunity to bring the team together and compete against our largest rival and then be ready to go in April.”

Amanda Kessel, younger sister of the Vegas Golden Knights’ Phil Kessel, scored the game’s first goal for the Americans in the first period. Her brother also scored tonight in his game, minutes apart from Amanda.

“I love it here and I would play hockey in Vegas all the time,” she said. “It’s one of my favorite cities in the U.S. and it’s a city that’s really grown to love hockey. You can tell that the community is behind it and it’s special to play here.”

The fifth game of the Rivalry Series heads to Crypto.com Arena in Los Angeles on December 19 before the final two games will take place in Canada in 2023.