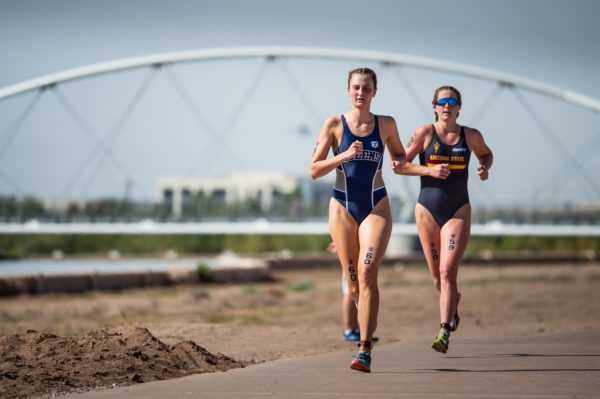 Triathlon has been on the NCAA emerging sports list since 2014 and already has 26 universities offering varsity programs. Photograph: Nils Nilson/USA Triathlon

USA Triathlon and the USA Triathlon Foundation have launched the Watch Us Thrive Collective, providing an opportunity for NCAA women’s triathlon student-athletes to capitalize on their name, image and likeness and becoming the first National Governing Body to launch a NIL collective.

Financed through donors, the Watch Us Thrive Collective supports women’s triathlon student-athletes in the form of NIL payments. In return, recipients will promote triathlon and NCAA women’s triathlon movement on their social media channels and through other digital avenues.

“Now is an incredibly exciting time for women’s collegiate triathlon, both as we head toward becoming an NCAA championship sport and with the emergence of NIL deals in collegiate athletics,” said Tim Yount, chief sport development officer of USA Triathlon. “The Watch Us Thrive Collective will allow NCAA women’s collegiate triathlon fans and supporters of the sport a tangible way to help current and future triathlon student-athletes, while the athletes can help spread the word about the virtues of our sport, community and NCAA women’s triathlon. It also shows USA Triathlon is committed to being a long-term and active partner in the development of this sport at the NCAA level.”