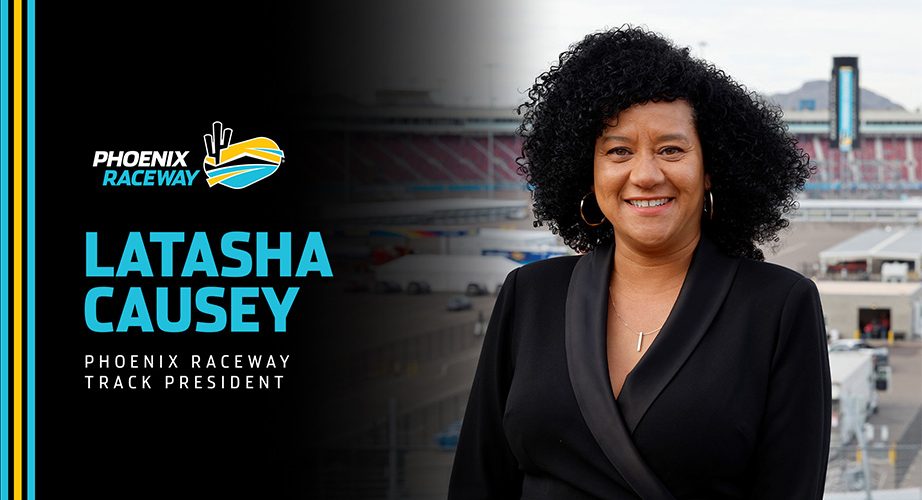 Causey, a Phoenix native and community development executive, will become the first female African American track president in NASCAR history and the second woman to hold the position at Phoenix Raceway.

Causey has been recognized for her work in the Phoenix community and is also a founding member of the NASCAR Accelerators host committee, established in 2020. The committee is comprised of community and business leaders who serve as Arizona’s ambassadors for NASCAR and promote community investment, with proceeds benefitting nonprofit organizations identified by Arizona Accelerator Charities.

“I have been fortunate to call The Valley ‘home’ my entire life and I could not be more grateful to become the next leader of Phoenix Raceway,” Causey said. “NASCAR is a sport that brings people together and as a result, Phoenix Raceway plays a key role in showcasing our great community to visitors across the country every year. I cannot wait to help build upon the great work that’s already been done in making this facility one of the true gems in sports and entertainment.”

Most recently, Causey served as vice president and community development officer for Bell Bank in Arizona, working with key business leaders and community organizations across the state. Prior to Bell Bank, she held various leadership roles for more than a decade at USAA’s North Phoenix Campus where she was responsible for leading the local USAA Foundation and employee volunteerism in the community.

“Latasha’s track record speaks for itself as a highly experienced executive that prioritizes relationships and giving back to the community — also core values of ours at NASCAR,” said Chip Wile, NASCAR senior vice president and chief track properties officer. “NASCAR and Phoenix Raceway take pride in making a positive impact on the community through creating a best-in-class experience for fans when they visit the track, as well as through actively giving back and playing a significant role as a community partner. Because of these ideals, Latasha is the perfect fit to lead Phoenix Raceway into 2023 and beyond.”