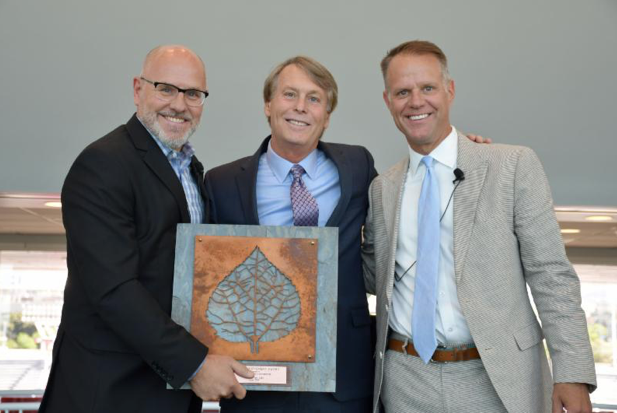 The Utah Sports Commission has received Visit Salt Lake’s annual Tourism Achievement Award. The award is the convention bureau’s highest honor and is presented annually to honor members and community organizations for “outstanding efforts in supporting the mission of VSL and the larger tourism community of Salt Lake County.”

Jeff Robbins, president and CEO, accepted the Award on behalf of the sports commission at a ceremony held at The Tower at Rice-Eccles Stadium. Over the past 20 years, the Utah Sports Commission has partnered on 785 events with an estimated economic impact of more than $2 billion and an estimated media value of $462 million. The commission was also credited for its role in creating and directing the Olympic Exploratory Committee, which resulted in the U.S. Olympic and Paralympic Committee selecting Salt Lake City as its next candidate city to host a Winter Olympic and Paralympic Games.

“To make Salt Lake City America’s choice for a future Games, we needed the right team, and that absolutely included Jeff,” said Mayor Jackie Biskupski. “Jeff understands the role the Olympics plays in our community and how we have a responsibility to protect and build upon that legacy. Through the Utah Sports Commission and as a lover of all things sports, Jeff has helped keep the Olympic fire burning in all of us since 2002.”

“In 2018 alone, the Utah Sports Commission partnered on 53 events across the state, generating more than $184 million in economic impact to Utah, a new record,” said Chris Erickson, VSL board chair. “We are proud to partner with the sports commission to bring sporting events to the Salt Lake area and are optimistic for another opportunity to welcome the world to Utah’s capital city by hosting another Olympic Games.”