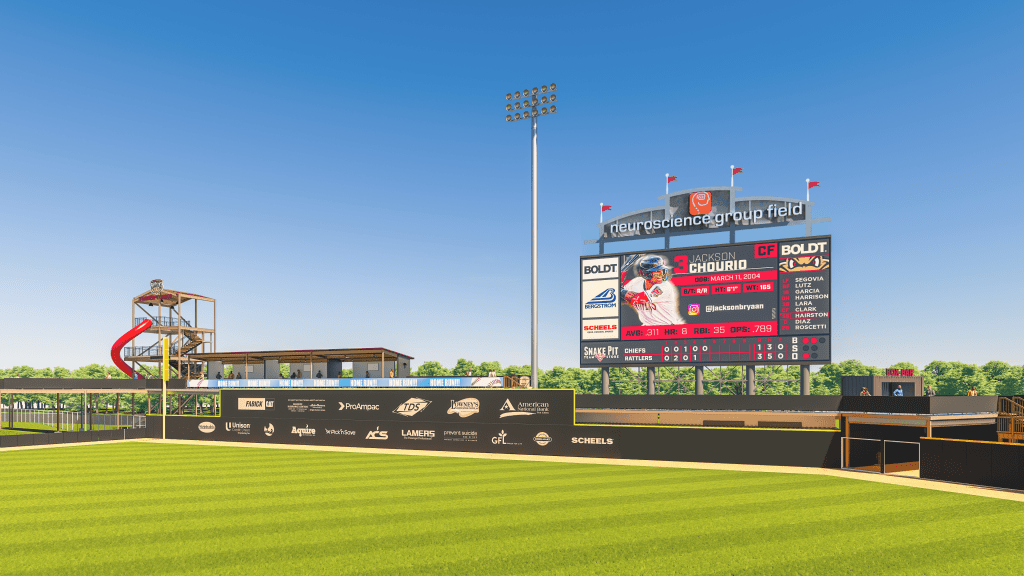 The Wisconsin Timber Rattlers, the Midwest League affiliate of the Milwaukee Brewers, are getting a large renovation to their stadium before the start of the 2023 season.

Neuroscience Group Field at Fox Cities Stadium will look a lot different when the team takes the field next spring, thanks to a collaborative effort between Third Base Ventures, the owners of the Rattlers, and Appleton-based Boldt Construction, the company that built the facility in 1995.

The design for the rejuvenated stadium is provided by Pendulum Studio, an architectural firm out of Kansas City, Missouri, specializing in baseball/sports stadiums. This set of stadium renovations has been developed to meet the new standards for Minor League Baseball facilities as set forward in the Player Development License granted to Third Base Ventures in 2020.

There will be new seating areas, improved player amenities, an expanded concourse that will encircle the entire stadium and a three-story slide as part of the upgrades. The slide, a fixture of Milwaukee Brewers baseball for years, is an homage to the Timber Rattlers’ parent club. The slide at Neuroscience Group Field at Fox Cities Stadium will be available for all fans to use during games.

“We are extremely pleased and excited to announce the stadium renovation plans for the 2023 season which will create one of the best home clubhouses in all Minor League Baseball while drastically increasing the quality of space for visiting teams,” said Rob Zerjav, president, chief executive officer and managing partner of Third Base Ventures/Wisconsin Timber Rattlers. “We can’t wait for our fans to experience the new stadium renovations which will add new outdoor suites above the left field wall, widen the existing concourse, allow fans to walk around the entire field and – last but not least – take a ride on the three-story slide in the left field corner.”

Key seating upgrades include increasing the capacity for fans in wheelchairs and allowing access to the entire field as the existing boardwalk will be connected to a new walkway. The seating area above the left field wall will feature three covered, open-air suites as well as additional ticketed seating and general admission seating.

“These impressive renovations will significantly enhance the facilities and serve as a tremendous asset to our players and staff as the next generation of Brewers make their way through the Fox Cities,” said Tom Flanagan, the Milwaukee Brewers vice president, minor league operations. “The Timber Rattlers have always provided a first-class operation and we couldn’t be prouder to be their partner.”

The new home clubhouse will be twice the size of the existing one and feature a new circular locker room, two indoor batting cages, two player-focused areas for nutrition and relaxation, expanded offices for coaches and a dedicated female locker room, an expanded training area and a large weight room connected to an outdoor player agility field.

Another new area for fans is the Home Plate Club, an all-inclusive picnic area directly behind the box seats in Sections 100, 101 and 102, to accommodate groups of 75 or more.