The World Surf League has announced a series of sustainability commitments that include becoming carbon neutral and eliminating single-serve plastics at events by the end of 2019. The league also launched a global marketing campaign called “Stop Trashing Waves” aimed at cleaning the ocean environment.

“The WSL is incredibly proud to break new ground in sports in the urgent battle against climate change and ocean pollution,” said WSL CEO Sophie Goldschmidt. “We believe it’s our responsibility to be ‘all in’ with our efforts to protect the ocean and beaches amid the devastating climate crisis we all face. We invite everyone who cares about the ocean to join us.”

In its efforts to have its WSL Championship Tour and Big Wave Tour events become carbon neutral, the league plans to offset its carbon footprint by investing in and supporting projects such as the REDD+ (reduce emissions from deforestation and forest degradation) and VCS (Verified Carbon Standard) certified carbon offset projects. The WSL also plans to reduce its carbon footprint by regionalizing its operation, limiting non-essential travel and implementing policies to reduce carbon emissions at its offices.

When it comes to eliminating single-serve plastics at its events, the WSL will target items related to food service such as bottled beverages, cutlery and cups. The league already offers water states for spectators to refill bottles and chooses compostable materials where possible for its food service.

The league also intends to developa financial grant program to fund local projects and nonprofits that are working to safeguard coasts and protect those habitats.

“I think it’s a great stance and an important message to send to people around the world,” said 11-time WSL Champion Kelly Slater. “The ocean is vital to everyone, for food, for oxygen and especially to us surfers. I think everyone should make it their priority to care about this issue and make changes in their lives to help.”

For its marketing campaign, World Surf League will encourage fans to use the #StopTrashingWaves hashtag and has offered a toolkit with tips on saving the ocean environment. 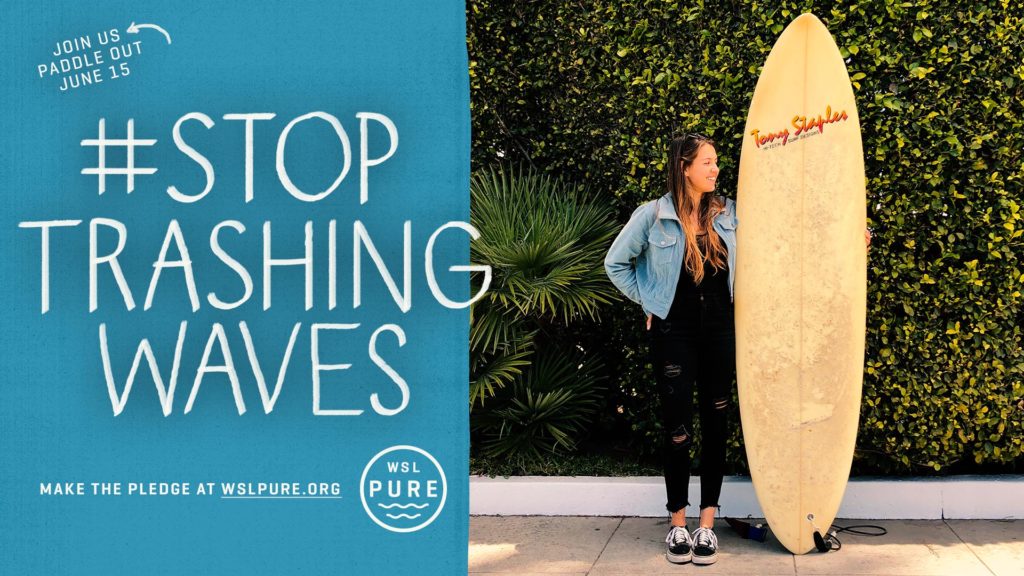