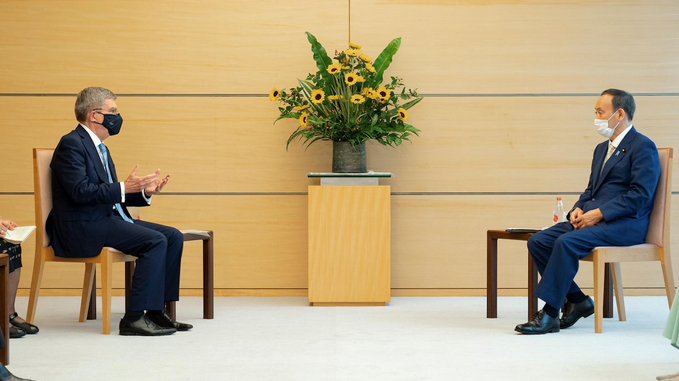 Nine days out from the Opening Ceremony of the Olympic Summer Games, IOC President Thomas Bach and Japanese Prime Minister Suga Yoshihide met to discuss preparations and emerged in solidarity on the plan to move forward, even as Tokyo recorded its highest number of COVID-19 cases in six months.

“I would like to express my heartfelt respect and gratitude to the government and the people of Japan for welcoming us,” Bach said following the meeting. “There are nine days left until the Opening Ceremony of the Olympic Games Tokyo 2020. Athletes from all over the world are now arriving into Tokyo. The Games will unite the world in all our diversity. They will show that we are stronger together in all our solidarity.

“The Tokyo 2020 Organizing Committee has done a fantastic job in preparing for these Games and to make Tokyo the best-prepared Olympic city ever,” Bach continued. “Achieving this was only possible because of the fantastic volunteers and their dedicated staff. The IOC is sitting in the same boat and we are rowing in the same direction, enjoying the full support of the Government of Japan.”

Still, not all teams are arriving yet. The Refugee Team, which has been training in Qatar, has had their arrival delayed after a team official was confirmed positive for COVID-19. The team includes 29 athletes and 11 officials, one of whom was single-vaccinated but tested positive and was asymptomatic. Nonetheless, the team will stay in Doha and continue their training with daily tests.

The IOC reports that 85 percent of the athletes and officials who will live in the Olympic Village will be vaccinated, and nearly 100 percent of IOC members and staff either vaccinated or considered immune. For the 6,000 international media representatives planning to be in Tokyo, the vaccination rate is between 70 and 80 percent, the IOC reported.

Of the 8,000 people that arrived in Tokyo for the Games between July 1 and July 13, three  tested positive upon arrival and were immediately isolated, with close contacts subject to quarantine measures.

Meanwhile, Tokyo’s rates of COVID continue to rise. On Wednesday, 1,149 new cases were reported across the city, the highest since 1,184 were reported on January 22. It was the 25th consecutive day that cases were higher than they were one week prior.

During an exchange between Bach and Suga, the prime minister sought assurance from the IOC that the Games will be held safely.

“To gain the understanding of our people, and also for the success of the Tokyo 2020 Games, it is absolutely necessary that all participants take appropriate actions and measures including countermeasures against the pandemic,” Suga said. “As the host of the Games, I do hope that the IOC will make the efforts so that all athletes and stakeholders will fully comply with these measures.”

Bach responded: “We’d like to reaffirm all our commitment on the side of the Olympic community to do everything, that we do not bring any risks to the Japanese people.”