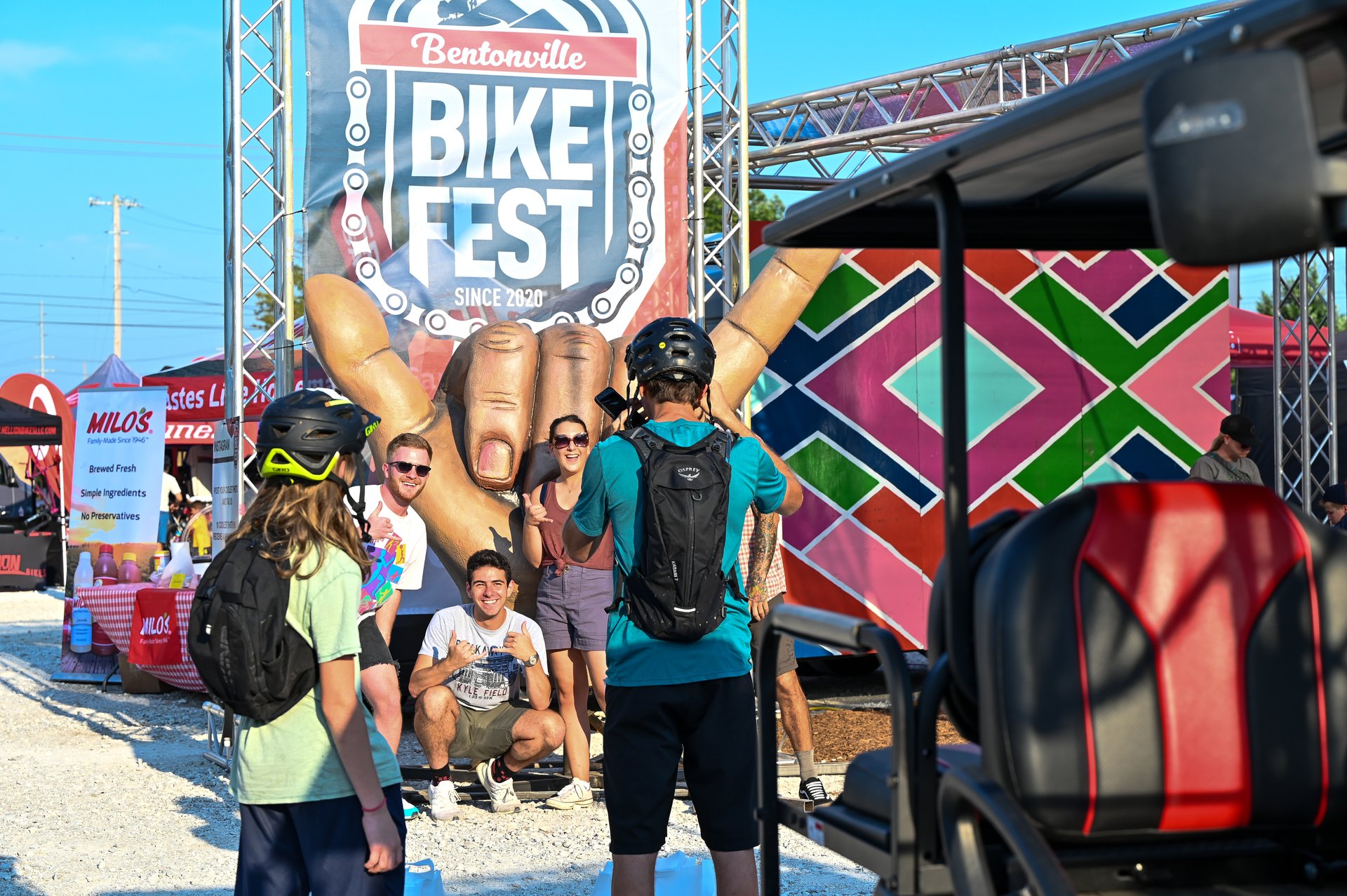 The Bentonville Bike Fest has quickly evolved into one of the biggest mountain biking events in the world. Photo by Cole McCoy

Bentonville, Arkansas, might not come to mind when mountain biking is the topic — but it should. The city of 50,000-plus, nestled in the northwest corner of the state, wants to be known as the mountain biking capital of the world.

With the June 17–19 Bentonville Bike Fest coming this weekend, the city will have its chance to show the world how far it’s come with the sport.

“It’s a young festival, and it has really been beneficial for our community. It puts that stamp of approval from the people when they’re coming to our area to ride and to experience it,” said Kalene Griffith, president and chief executive officer of Visit Bentonville. “We have this really wonderful cycling culture that the whole community has embraced.”

In 2007, Bentonville began building its first few miles of mountain biking trails. The Walton family, owners of Walmart — which is headquartered in Bentonville — made the investment to utilize the area’s vast natural surroundings in an attempt to entice potential employees.

What began with five miles of trails in 2007 has exploded to hundreds of miles in not only Bentonville, but other parts of the region and state. As the city became a hub for mountain biking, more than just locals took notice.

Kenny Belaey, a Belgian mountain bike trials world champion, first visited Bentonville in 2013. He heard all about the ambitious trail system that was in the planning stages.

“When I came back in 2018, I could see where they were going, and I instantly believed in the vision and what they wanted to do there,” Belaey said. “There was a lot of money put into the project, and it kept growing. Today, there are 80 people building more trails, so it’s just not stopped. It’s unseen and unparalleled.”

Belaey, much like the Bentonville locals, had a vision in 2018. He saw the area as an untapped market that could host a mega mountain biking festival that not only included biking competitions but concerts, workshops, children’s activities and more.

“People from other places would be like, ‘Why the hell would we go to Arkansas?’ And I told them, ‘No, you gotta go. It’s really great.’ They didn’t really believe me at first,” Belaey said. “We did a women’s shred event for the first time in 2019, and that planted the seed of what was to come.”

In May of 2019, Belaey brought big-time mountain biking to Bentonville. The women’s shred event collaborated with the Bentonville Film Festival. It was such a success that plans began to host an even bigger festival the next year with riders from both genders and all age groups. After COVID made its mark in 2020, the inaugural Bentonville Bike Fest took place in June 2021.

“When I pitched the idea of bringing an all-inclusive event like Bike Fest, the whole community really welcomed it and that just motivated me to prove to everybody that this is a really cool place and that everybody has to come here,” Belaey said. “It used to be a hard sell to get the brands and sponsors here. And now with the hype about this event, it’s really changed a lot. It’s a weekend where we champion everything that has been already built, and everybody wants to be a part of it. We’ve got brands coming in from California now that never even used to travel out of California.”

Emboldened by the success of the 2021 event — which saw around 15,000 attendees, even with COVID conditions — Belaey, Griffith and the rest of the event organizers have made the 2022 event bigger and better.

Belaey has competed in enough large events over the years to know what the people want out of a mountain biking festival.

In addition to six different types of biking competitions — featuring more than 600 competitors from ages 3 to 40-plus — the Bentonville Bike Fest includes 35 professional riders from around the world, a movie night featuring the film “Rad” (including an appearance from Bill Allen, one of the stars in the movie), workshops with the 150-plus brands that will activate, live music, scavenger hunts, and more.

There will also be a Juneteenth Panel on June 19 to educate the community about the holiday, in conjunction with dedicated art pieces of world-class African American cyclist Marshall ‘Major’ Taylor displayed.

The UCI race — the pinnacle of mountain bike competition — will be livestreamed on the Bentonville Bike Fest Facebook and YouTube channels at 2 p.m. CT on June 19.

Griffith says the estimated economic impact of the festival is substantial for the city and hopes to see it north of $2 million for the three-day event.

“We’re fortunate that when we bring in our cycling events like Bentonville Bike Fest, it really does have a huge impact on our restaurants, retail, hotels and lodging facilities,” Griffith said.

“Anytime we can do an event where we introduce our community to new audiences, or introduce cycling to new people, that’s a huge success. We feel that Bentonville is very special from a cycling perspective. You’re going to have a wonderful experience when you come to our community, whether it’s during the festival or if you just want to come and ride.”

Griffith and her team play a vital role in the festival — working with the police, fire department and parks department to ensure that everything runs smoothly.

“Bentonville is really onto something. I’m really privileged to do an event for all, and to inspire the kids,” Belaey said.