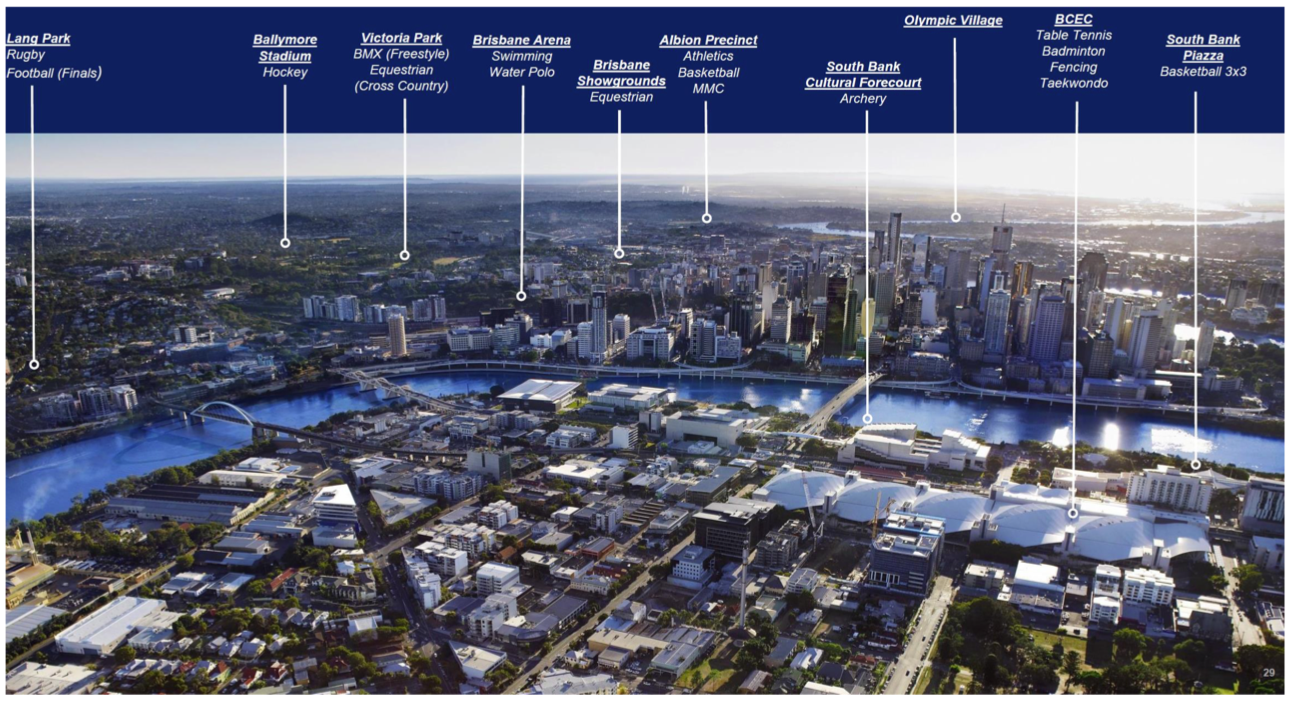 The Brisbane bid to host the 2032 Olympic and Paralympic Summer Games includes a cluster of venues in the city's downtown.

Brisbane, Australia, moved one step closer to hosting the 2032 Olympic and Paralympic Summer Games as the International Olympic Committee Executive Committee put forward the city as the only candidate to host the event when the full IOC votes in July.

The move was the result of a new bidding process that has tried to cut down on international lobbying and excessive costs from potential hosts. While other destinations were interested in 2032, Brisbane recently emerged as the top choice by a new Future Host Commission that vetted various proposals. With the IOC Executive Board unanimously putting Brisbane forward as the only city, a final vote in July is considered a formality.

“Sport is seen by many governments around the world as essential to the long-term development of their countries and regions,” IOC President Thomas Bach said. “The Brisbane 2032 Olympic project shows how forward-thinking leaders recognize the power of sport as a way to achieve lasting legacies for their communities.”

Preliminary reports estimate that the Olympics would generate $6.1 billion in value to Brisbane and $13.4 billion to Australia as a whole. Those factors included health, volunteering and resident benefits as well as qualitative benefits such as community infrastructure and behavioral change to protest the environment and reduce carbon emissions.

In recommending Brisbane, the executive board cited the master plan for the event, which calls for using 84 percent of existing or temporary venues, with remaining venues planned far in advance of the 11-year window the event would have to plan. The IOC also noted strong support from local, state and federal governments as well as the Australian public and the private sector.

“Our Commission has worked closely with Brisbane 2032 through a collaborative partnership to explore how their vision, concept and legacy plans for the Olympic and Paralympic Games could align with social and economic development plans for the city and the region,” said Kristin Kloster Aasen, chair of the IOC’s Future Host Commission. “The new approach to electing Olympic hosts has enabled this project to be enhanced as part of a two-way conversation, honoring our commitment that the Olympic Games should adapt to the needs of the host and their population, and not the reverse.”

If approved, Brisbane would become the third Australian city to host, following Sydney in 2000 and Melbourne in 1956.

While the IOC would appear to have Olympic Summer Games hosts set through 2032, no decision has yet been made about the Winter Games in 2030. Salt Lake City is among those interested in hosting that competition in 2030 or 2034.

Bach said there is no immediate timeline on selecting a 2030 host, noting that Winter Games have more logistics to consider than Summer Games.

“Organizing Winter Games is somehow more complex than organizing Summer Games because Olympic-sized swimming pools are available all across the globe but there are not so many mountains where you can organize a downhill,” he said. “Some of this needs a close study and having a look into it. It’s diligence before speed — we are not in a hurry.”