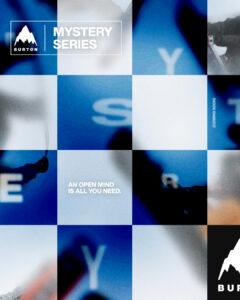 Burton is changing up the format of its U.S. Open snowboarding series, although the details are a bit of a mystery. In fact, the Burton Mystery Series is being described as an event that “throws away the rules and focuses on what matters most: creativity, self-expression, and good times — all under a cloak of mystery that’s unique to each event,” according to event organizers.

“This past August, we presented the Burton Mystery Series concept to our team riders, including Mark McMorris, Danny Davis, Kelly Clark, Zeb Powell, Ben Ferguson, Brock Crouch, Red Gerard, Kimmy Fasani and the rest of the team and gathered their feedback,” said John Lacy, chief executive officer of Burton. “Overall, the energy was so positive about trying a totally new approach to snowboarding events with the goal of inviting more people to ride. We’re the first to say that we don’t have all the details completely mapped out for the Mystery Series and that’s 100 percent intentional. We want to be flexible with how the Mystery Series evolves. We want to work with our riders, our ambassadors and the global snowboarding community to create an event series that is inclusive of all abilities while also celebrating the best riders in the world.”

Burton, which has staged its U.S. Open for years in Vail, Colorado, intends to build the Mystery Series into a global series of snowboarding events for all levels of riders. Organizers said the ultimate goal is to host a pinnacle event that includes elements from the global grass-roots events and features the world’s best riders. That event is designed to be hosted in a different country each time, opening up the new event series to more international riders.

“One of the major goals of the Mystery Series in the years to come is to get back to the roots of what events like the original Opens were all about – the idea that a young unknown rider could break into snowboarding through Burton events,” said Donna Carpenter, owner of Burton. “With all the passionate people working to build the new Mystery Series, Burton will continue its long legacy of hosting the greatest snowboard events in the world.”