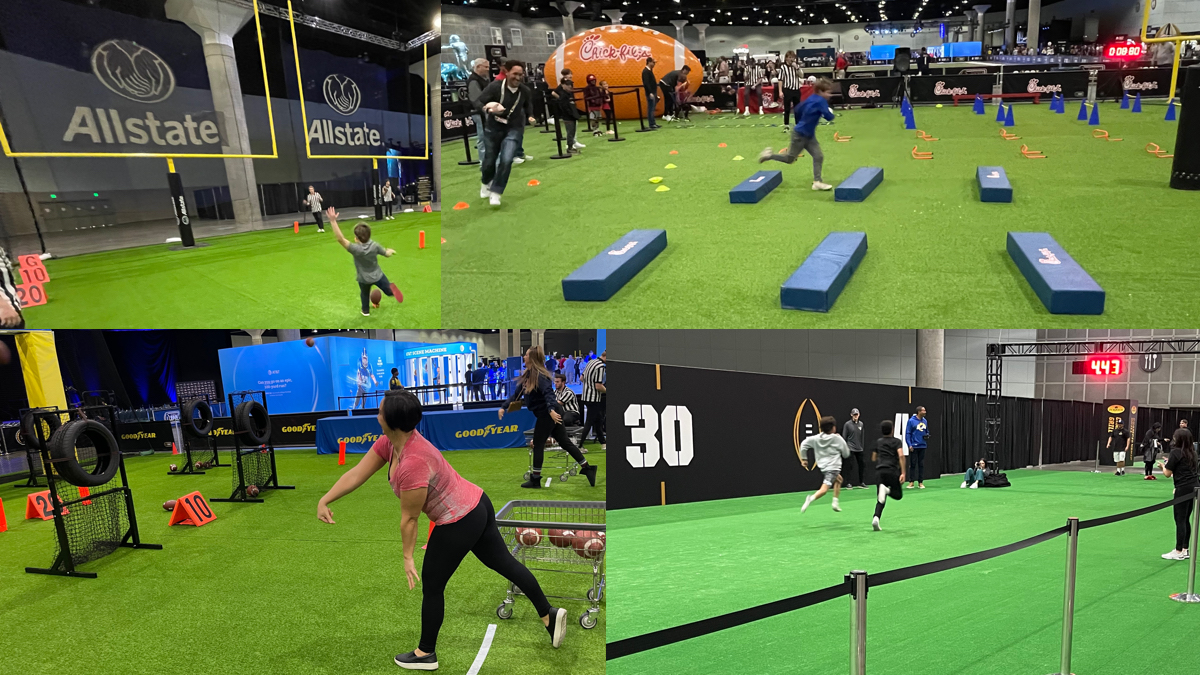 There were plenty of activities at Fan Central, including a 40-yard dash, football toss, field goal kicking station and obstacle course. Photo by Justin Shaw/SportsTravel

Los Angeles hosted the College Football Playoff National Championship Game for the first time on January 9 and a city known for entertainment did not disappoint.

The game ended up a dud as Georgia’s 65–7 win over TCU left little suspense after the first quarter. But fans from both teams were treated to many activities around the city in the days leading to the game.

The main attraction was the two-day Playoff Fan Central at the Los Angeles Convention Center. The free event offered a variety of activities including panel discussions, sponsor activations, college football trophies and plenty of ways for kids and adults to get into the action.

“Playoff Fan Central at the convention center was awesome,” said Ryan Hall, senior director of public events and sponsorships, CFP. “We loved getting a lot of kids and families out there, smiling and running around having a great time. That’s what it’s all about and what we wanted to accomplish.”

Fans of all ages participated in the 40-yard dash — complete with a timer at the finish line — as well as a football toss, field goal kicking station and obstacle course.

There was a Puppies at the Playoff section where fans could get personal time with some adorable pups. And for the adults, there was the Modelo Lounge, which was highlighted by TVs hooked up to Xbox’s NCAA Football 2010 — one of the last versions of the popular college football video game that will make its return in 2024 amid new NIL agreements.

“It’s been incredible having two out-of-town teams here and their fans visiting,” said Kathryn Schloessman, president and chief executive officer of the Los Angeles Sports and Entertainment Commission. “Georgia has been to the national championship before and the TCU fans were happy to be here for the first time. You can tell both fanbases enjoyed the experience and enjoyed our city, which is exactly what you want them to do.”

There were plenty of sponsors on hand including a Gatorade hydration station, some new Mercedes Benz cars, the Dr Pepper zone and Capital One’s virtual locker room.

Prestigious college football trophies were on display for photo opportunities including the Heisman Trophy, CFP championship and all of the New Year’s Six bowl trophies.

It wasn’t all fun and games though, as the most important activation at the Fan Fest was the Extra Yard for Teachers campaign spearheaded by the College Football Playoff Foundation. Fans could line up to throw a football and complete a pass for either Georgia or TCU, with each pass generating a donation on their behalf to donorschoose.org, benefitting LA Unified School District.

“It’s been an absolutely outstanding week and we were able to touch a lot of fans who weren’t able to come to SoFi for the game through the Fan Fest and concerts,” Hall said. “Extra Yard for Teachers and the Extra Yard 5K run were highly successful. We had great crowds and overall, it was just a wonderful weekend for college football in Los Angeles.”

Schloessman said the estimated $225 million in economic impact the CFP championship weekend created for Los Angeles, coupled with the $450 million the city generated for the Super Bowl in 2022, will help to solve the social issues Los Angeles faces including the homeless crisis that is currently gripping the city.

But that’s not the only social issue LASEC is focusing its efforts toward solving.

“The thing we’re most excited about is continuing the Legacy programs that Business Connect and the NFL started here during the Super Bowl last year,” Schloessman said. “Business Connect has 200 local diverse businesses in the event production space and we were able to continue that program on through CFP to give these local diverse businesses an opportunity to bid on this business and get their foot in the door.

“And then also the Legacy program that the CFP brought; we honored 46 teachers who are doing great work in the community through sports, movement and play. We gave them grants and did promotional videos, so being able to use all this attention to shine the light on the people who are doing good in our community has been a positive impact.”