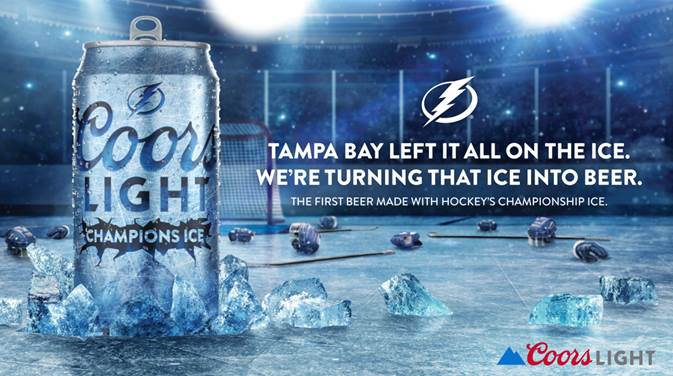 Sports fans like being close to the action. But will they want to be this close?

After the Tampa Bay Lightning secured their second consecutive Stanley Cup, the team’s official beer —Coors Light — announced it will sell the first brew ever made from the actual ice that the teams skated on during the final. Champions Ice will include ice that was scraped from Amalie Arena in Tampa and sent to the Coors brewery in Golden, Colorado as part of the beer-making process.

The special-edition beer will be filtered during that brewing process in what the beermaker assures will result in a “fully purified drinking experience.”

“As an official beer partner of the Tampa Bay Lightning, we’re proud to celebrate the team’s second-straight championship win by giving Bolts fans a literal taste of the action,” said Marcelo Pascoa, vice president of marketing for the Coors Family of Brands. “We’re no strangers to the magic of the ice, both in the arena and outside it. And now, we’ve taken that ice and have brewed it into a refreshing beer.”

The beer will be available starting July 12 at participating Tampa area bars, with a limited supply of 32-ounce collectable crowlers available as well.