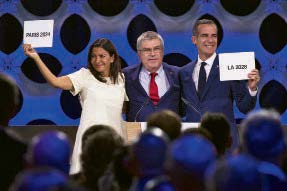 The official vote awarding Paris the 2024 Olympic and Paralympic Summer Games and Los Angeles the 2028 event made for one of the most anticlimactic International Olympic Committee sessions in history. But all parties agreed that whatever the final decision lacked in drama, it made up for in goodwill and stability for the Olympic movement.

Following the unanimous vote at the IOC’s session in Lima, Peru, on Septem-ber 13, Los Angeles Mayor Eric Garcetti called the decision “a pretty radical revolution” over a process that typically leaves “two or three cities crying in a corner” when a single host is selected over multiple bidders. “In this world, there are enough losers, or enough divisions or enough people who go after dreams to have them crushed,” he said. “Today, I think we model something that can be different—that dreams can come true.”

Lengthy process. The vote marked the end of a remarkable bid process for the 2024 Games that saw several major international cities drop out of the running—including Boston, the U.S. Olympic Committee’s original finalist. Left with just Paris and Los Angeles, the IOC began negotiating terms for each to host the next two available summer events. Los Angeles eventually agreed to wait an additional four years, earning incentives from the IOC that included an advance of $1.8 billion for the planning, organizing, financing and staging of the Games. Under terms of the deal, up to $160 million can be used by the organizing committee to develop youth and sports-oriented activities to be carried out in the years leading up to the Games.

IOC officials said they were satisfied with the conclusion, which offers 11 years of hosting stability. “Over the course of our evaluations, these two world-class cities proved their ability to host exceptional Games,” said Patrick Baumann, the secretary general of the International Basketball Federation, who led the evaluation commission for both events. “The candidatures are low-risk and high-reward, both for the Olympic movement and the cities.”

Games return. The decision means the Summer Games will return to the U.S. for the first time since Atlanta hosted in 1996. The Los Angeles bid calls for events to be held in clusters at venues in downtown Los Angeles, the San Fernando Valley, Long Beach, the South Bay and Anaheim. Athletes would be housed in dormitories at UCLA, and members of the media would stay at the University of Southern California.