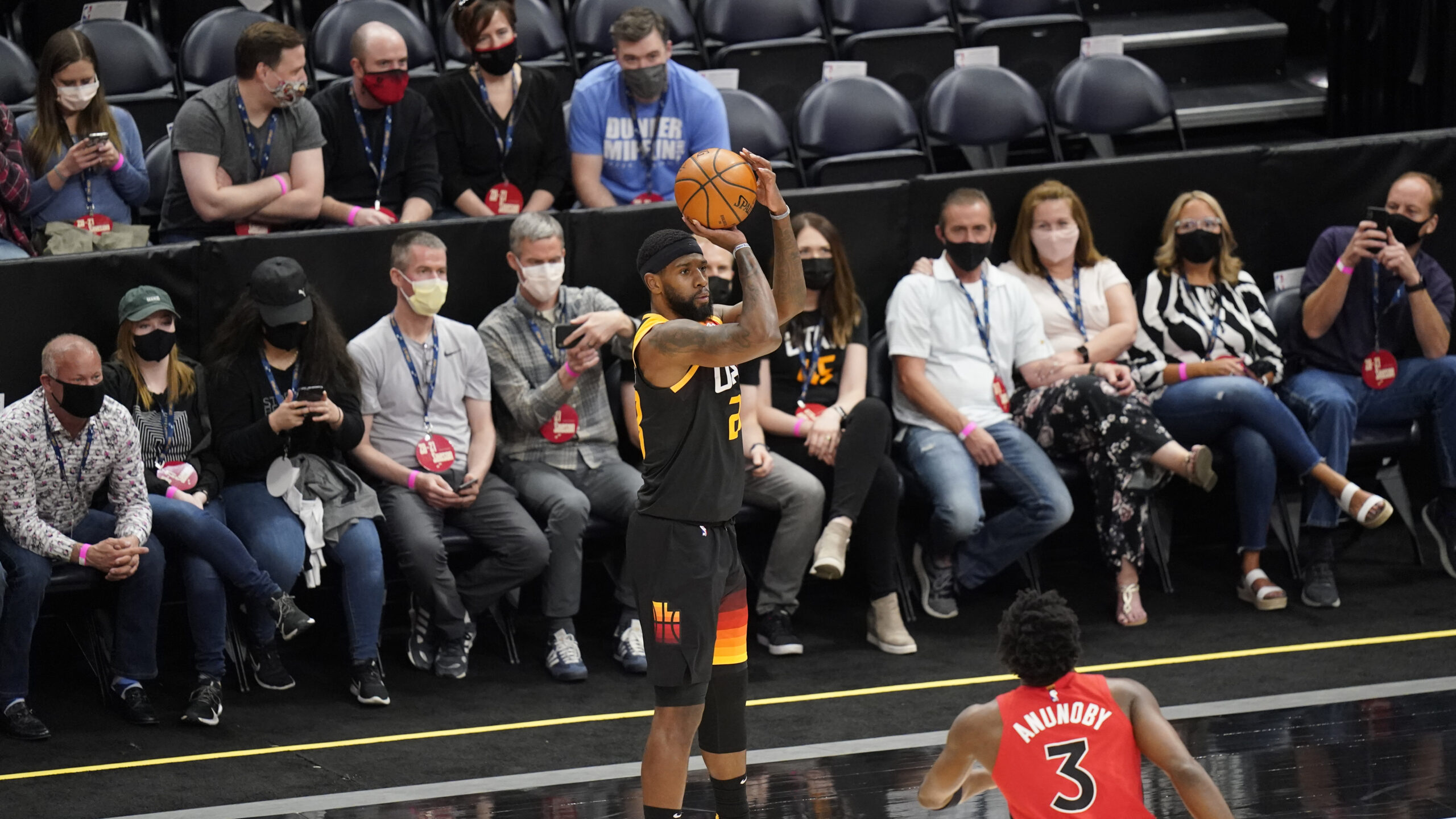 Utah Jazz forward Royce O'Neale shoots as fans sit courtside on May 1, 2021, in Salt Lake City. The home of the Jazz will return to the name of Delta Center in the summer of 2023. (AP Photo/Rick Bowmer)

One of the biggest airline carriers in the United States is bringing back one of its most well-known sports marketing deals as Delta Airlines and the Utah Jazz announced this weekend that the NBA franchise’s home will be called The Delta Center starting in the summer of 2023.

The naming rights deal is a return to Delta’s roots as the original naming rights sponsor of the home of the Jazz. The arena opened in 1991 as the Delta Center and stayed that way until November 2006 when Delta did not renew a 15-year contract.

“Today we celebrate a new chapter in the longstanding history between Delta, the Utah Jazz and the Salt Lake City community,” said Delta Chief Executive Officer Ed Bastian. “The homecoming of the Delta Center represents a continued investment and dedication to Salt Lake City, and together we will provide a leading sports and entertainment experience to the city and Jazz fans worldwide.”

It also has been branded in the past as EnergySolutions Arena from 2006 through 2015; Vivint, a home security system, bought the naming rights in 2016 as the venue was called Vivint Smart Home Arena and then Vivint Arena since 2020.

“I have so many amazing memories of the Delta Center as a kid, and I know that countless people throughout Utah and beyond had similar experiences creating core memories there, whether watching the Olympics & Paralympic Winter Games, the NBA Finals, concerts, or other incredible events,” said Ryan Smith, owner of the Utah Jazz and chairman of Smith Entertainment Group. “We are excited to partner with Ed Bastian and the entire Delta team to not only bring back the arena’s original name, but also leverage the amazing work Delta is doing to provide incredible experiences for the people of our state and help show the world how amazing Utah is.”

Delta has a major presence in Salt Lake City. The airline’s main Western hub is at Salt Lake City International Airport and Delta currently makes up about 70 percent of Salt Lake City’s outbound flights. The airport’s massive renovation in late 2020 has Delta’s gates as the entire concourse A area with plans to add additional Delta gates in the other concourse in coming years. Once the airport is finally completed, Delta will have all of concourse A and more than a third of concourse B.

The naming rights deal brings Delta back into the arena naming rights game but far from its only involvement in sports. It notably in early 2020 launched its eight-year commitment to LA28 as the inaugural Founding Partner. Delta is the official airline of LA28 and Team USA for the Paris 2024, Milan-Cortina 2026 and Los Angeles 2028 Olympics.

The home of the NBA’s Utah Jazz since 1991, the arena also has hosted the Arena Football League and WNBA. It was the home for figure skating and short-track speed skating at the 2002 Olympic Winter Games. The arena will host the NBA All-Star Game in February, 30 years after it was last in the venue — which at that time was named the Delta Center.

While the arena is one of the oldest in the NBA, in 2016 the Jazz spent $125 million essentially building a new venue within the existing structure, ripping out everything including the famous green plastic seats to expand the concourses and food and beverage areas, increase activation and club spaces and more while slight decreasing the seating capacity.