It was August 2015 when Martin Palmaz first got the word. As executive director of the U.S. Hang Gliding & Paragliding Association, Palmaz was regularly in touch with the flight schools around the country that help keep the sport aloft. This time, one of them was relaying some distressing news: Its insurance policy was not being renewed. There had been no accidents reported and there was no issue with the flight school’s safety record. Rather, the Lloyd’s of London syndicate that provided insurance had decided it no longer planned to insure the high-risk sport. “That was the canary in the coal mine,” Palmaz recalled.

Sure enough, each remaining school and eventually USHPA itself was notified that their policies would no longer be renewed to cover accidents, offer liability for instructors or protect potential damage to property—all the things the sport needed to ensure it could continue in a worst-case scenario. What happened next was a remarkable turn of events for the Colorado Springs-based USHPA, which set out on a journey to become self-insured, a task very few national governing bodies have had to accomplish. And more than two years later, the move appears to have been worth the effort.

As USHPA started looking first for viable insurance alternatives, it became clear there were not going to be any great options. Costs for possible insurance were enormous and full of exclusions, Palmaz said. And if the organization did submit a claim, “if they even pay, they’ll cancel the policy right away,” he said of the insurers that were even willing to take the risk. “We did our research and looked at what was possible but none of what we found was anything we liked.”

Fortunately, a unique piece of federal legislation crafted in 1986—The Liability Risk Retention Act—allowed the option for the NGB to insure itself, a law put in place for industries that had similar hard times finding insurance. But the road to creating a risk retention group that would allow USHPA to insure itself wasn’t easy either. When USHPA got word that its policy would not be renewed, it was given seven months to figure out a plan. To become fully self-insured, the NGB would need to raise $3 million. “We were in crisis mode,” Palmaz said. “We basically had to raise $3 million as soon as we could.” For an organization whose annual budget is $1.8 million, it was no easy task.

Thus began a massive fundraising and education campaign—Free Flight Forever—aimed at the organization’s 9,000 members. “We notified the members that unless we raise this money to start our own insurance company, we would not be able to continue to operate,” Palmaz said. “We wouldn’t have insurance for the instructors, schools, pilots and the landowners—and the landowners represent all the major, high-profile sites.”

That last point was crucial as some of the sites in question are national parks such as Yosemite that offer more than a property that needs insurance; they offer exposure to the sport itself. “For us, visibility in our sport is important,” Palmaz said. Lose that visibility by not being able to guarantee landowners that they or their property would be taken care of in an accident and the sport had other problems.

In the end, the sport’s stakeholders responded thanks largely to donations from flight schools and individuals. Several high-net worth supporters also loaned about $600,000 to the effort and became, in effect, short-term investors in the new insurance group.

Now, more than two full years into the operation, USHPA is looking back at what turned out to save the organization. “In the big picture, starting our own insurance company is a huge benefit financially. We’re motivated to manage the risk and we get the financial benefit of being well run. All those guys were in it for the profit,” Palmaz said of other insurance companies that might have offered a policy. “We were in it to save our sports and reduce our expenses.”

Eventually, once all the investors are paid back and assuming the risk stays where it has been historically, the venture could also turn profitable if the new insurance outfit expands the number of activities it can protect. And members could end up paying less in premiums.

“Ourselves, we could see reduction in premiums potentially $200,000 or $300,000 less than what we pay now,” Palmaz said. “But the important thing is we successfully manage our risk in all areas and the first two years have been great. We’ve had minimal claims and fewer accidents that result in claims.”

Having the heavy lifting behind them by becoming overnight insurance experts, the five-person USHPA staff can now turn some of its attention to growing the sport itself. While hang gliding (in which participants navigate in a prone position while holding a bar below the directly overhead wing) and paragliding (in which participants glide in a seated position using a parachute-type curved wing) are still largely recreational activities, there are competitions as well.

USHPA doesn’t organize any of its own events, but it does sanction events around the country, primarily organized by seasoned competitors or chapters. The sport generally has competitions in four disciplines: Race to goal (the most popular form, where a GPS device is used to determine who has flown the fastest through a predetermined course); open distance (where competitors fly as far as they can); acrobatics; and spot landing (perhaps the most accessible form for spectators, where participants must land in a specific location).

“A lot of times the competitions are a great way for experienced pilots to gain more knowledge,” Palmaz said. “They’re not necessarily seeking to be competitors, per se, but it’s a great venue to learn.”

Still, larger events can attract up to 150 competitors, especially for paragliding, where bigger events can feature the unusual sight of as many as 100 people gliding in the same thermal in the air at the same time. 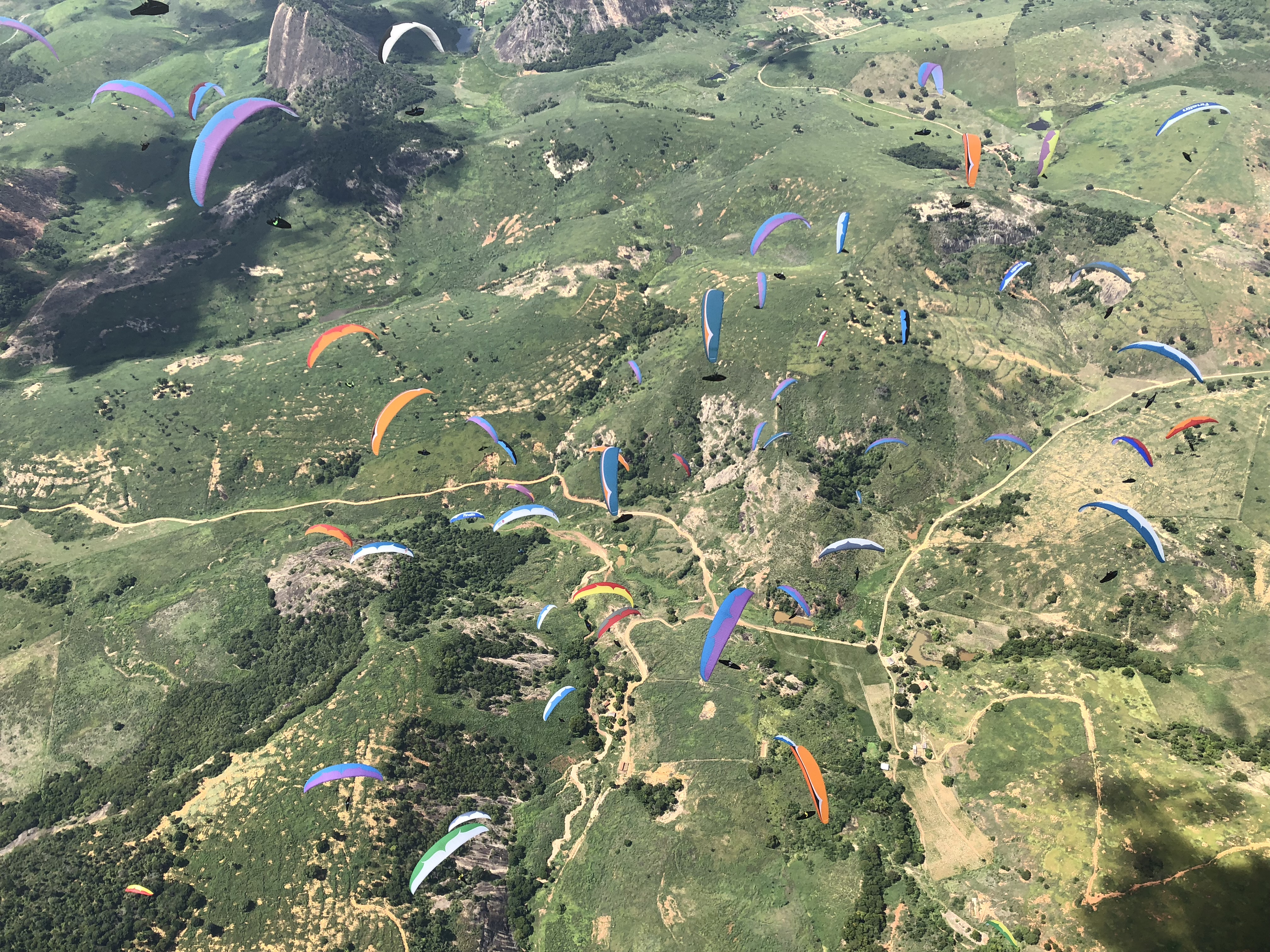 As for the endurance of those athletes, the current world record for distance achieved in a single paragliding session is 300 miles. For hang gliding, that record is 475 miles.

One area Palmaz is looking to explore for expanding events is a model that Red Bull has found successful with its X-Alps event. In that paragliding competition, billed as “the world’s toughest adventure race,” athletes must run, hike, climb and glide 1,000 kilometers across the Alps from Salzburg, Austria, to Monaco, navigating their way through certain checkpoints. Palmaz said the production, appeal and excitement of the event is something that potentially could be modeled. “When I can get my head above water, I want to integrate a little more accessibility for people to see the sport. Exposure is a big thing for us.”

And now that USHPA has reduced its insurance exposure, increasing the sport’s exposure to the public would seem the next logical step.