Home > Baseball > For its First Draft with Fans, MLB Turnsto a Pro in Organizing Events 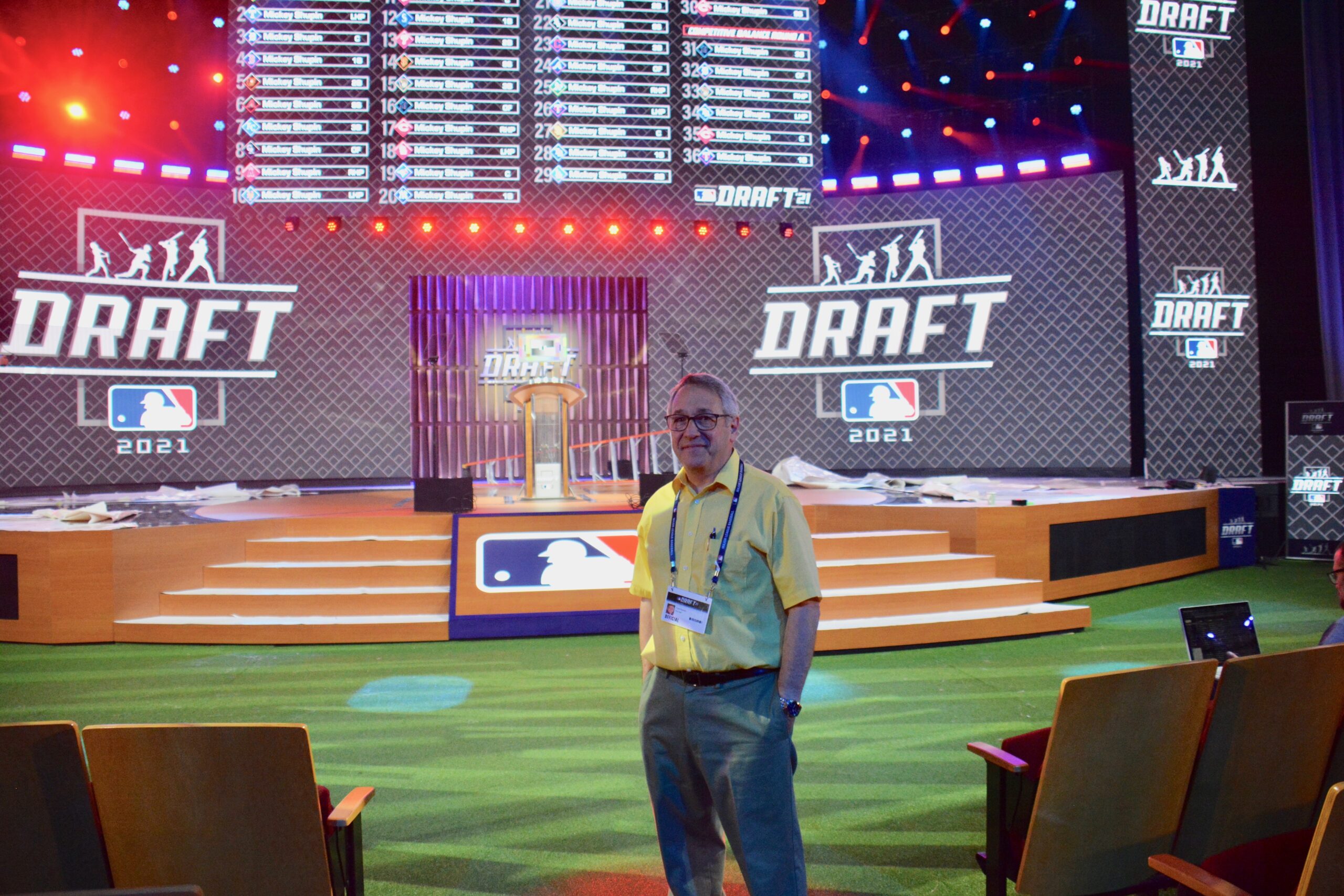 Frank Supovitz, a veteran of events fo the NHL and NFL, was brought on as executive producer of the MLB Draft for the first time.

On the screen behind the commissioner’s podium, from different angles, is the green and yellow logo of the Oakland A’s. The music of En Vogue plays on the speakers at the Bellco Theatre in Denver during a rehearsal the day before the Major League Baseball Draft.

Supovitz knows that detail because he knows nearly every detail of the event that he produced for the July 11 Draft, which this year was staged in front of a crowd for the first time in years — and the first time with a production value similar to what football, hockey and basketball fans have become accustomed to.

Supovitz, the president and chief experience officer at Fast Traffic Events and Entertainment, is no stranger to professional league drafts. Over 14 years at the NHL and 10 years at the NFL serving as the head of events for both leagues, he may be the most experienced draft producer in history. So when MLB was looking for an executive producer for the first draft to be staged as part of All-Star Weekend, they knew where to turn.

Last year, MLB had plans to conduct the draft alongside the College World Series in Omaha, which itself was going to be a break from tradition. But when the pandemic scrapped last year’s CWS, MLB adjusted and decided to make the Draft a part of the festivities in the All-Star host city.

From the time it began in 1965 until the early 2000s, the Draft took place on a conference call among league and team officials. Disney’s campus in Orlando hosted the event in 2007 and 2008 on a smaller scale than what took place in Denver this week. Since then, it has served largely as a television production from MLB Network’s studios.

For Denver, which is hosting the All-Star Game, Home Run Derby and the Play Ball Park fan festival for the first time since 1998, the addition of the live Draft was another bonus. Sunday’s first round was staged at Bellco Theatre, inside the downtown Colorado Convention Center. (Catcher Henry Davis from Louisville was drafted first overall by the Pittsburgh Pirates.)

About 2,000 spectators, including a group of super fans, were invited to see it live, along with two stage setups for ESPN and MLB Network, which aired the first round live. The draft continues behind closed doors July 12 and 13 at the Rally Hotel across the street from Coors Field. Team mascots were invited to roam the theater, trivia questions were asked between picks and two sets of tickets to the Home Run Derby and the game itself were given out during the broadcast.

For Supovitz, the move of the baseball draft to a fan-friendly environment came as no surprise. At its heart, he said of the draft, the event is a business meeting. But it’s one that has become an evening of entertainment for fans as well in other leagues.

“Every draft evolved the same way,” he said.

Supovitz was brought on to help with the staging at all levels, including the design of the set, which featured a baseball bat art piece behind Commissioner Rob Manfred as he called the names of the players drafted. The podium itself was set on home plate of a batter’s box on stage.

To the side of the stage were two lockers that draftees on hand could approach to receive their jersey and hats. Their names were displayed over the lockers on an electronic readout. (Eight draftees attended the event live.) After each pick, crews changed the jersey, hat and batting helmet to be ready for the next team on the clock.

Those drafted said they appreciated the atmosphere.

“I’ve always dreamed about being in this position and walking across that stage,” said Trey Sweeney, who was selected with the No. 20 pick by the New York Yankees. “To hear people cheering you on is just a good, crazy feeling.”

And then there was the music. Each team was allowed to submit four songs that had some connection to the team. In the case where four songs weren’t chosen, Supovitz and his team filled in the blanks with songs either about the city where the team was from or by an artist from that area.

“There’s really a wide diversity of music,” he said. “We spent quite a bit of time on the music.”

As for the production, Supovitz said there are key differences between MLB’s needs and, say, the NFL Draft that many sports fans have become accustomed to watching.

“It’s actually a bit more complex from a production perspective than the NFL Draft,” he said.

Being in a theater allowed for more details such as lighting that reflected the colors of each team. Each change, of course, comes with its own set of production cues.

And with a live audience for the first time, there had to be ways to keep them engaged from a production perspective, including having access to the TV feed so they could see analysis of the players come through on two large screens to the sides of the stage with closed captioning. Since the TV feed was on a two-second delay, the theater couldn’t pump in direct sound from the broadcast for fans, necessitating the closed-caption option so the sound in the theater didn’t compete with the broadcast itself.

Both those kinds of details are par for the course for Supovitz, who can now add MLB to his resume of professional league drafts.

“For me this was great fun,” he said, “because the draft is a familiar environment.”