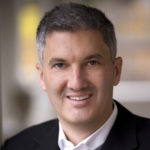 MGM Resorts International has appointed George Kliavkoff as president of entertainment and sports. He most recently served as president and CEO of Jaunt Inc., an augmented and virtual reality start-up that worked with clients including the NFL, NBA, MLB and Disney.

“George is joining our company at an exciting time and will play a key role as we both build on existing successful partnerships as well as continue to expand our industry-leading sports and entertainment offerings,” said MGM Resorts President Bill Hornbuckle. “His innovative approach and knowledge in the entertainment and digital world will strengthen our reputation as a company that provides world-class experiences for our guests to enjoy.”

Click here to read more about George Kliavkoff being hired as the next commissioner of the Pac-12 Conference.

In his new role with MGM Resorts, Kliavkoff is responsible for the operations, finance, strategy, booking, marketing, sponsorships and ticketing for the company’s more than 30 theaters, showrooms and arenas, including T-Mobile Arena, MGM Grand Garden, Mandalay Bay Events Center, the Mandalay Bay Beach, Park Theater, the Theater at MGM National Harbor and the MassMutual Center at MGM Springfield.