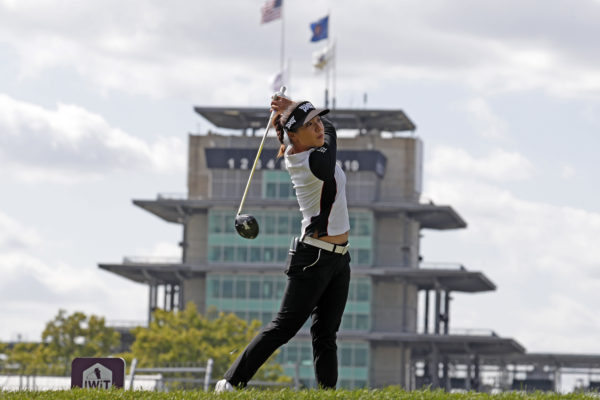 INDIANAPOLIS, IN - SEPTEMBER 09: LPGA golfer Lydia Ko tees off on the 16th hole with the Indianapolis Motor Speedway Pagoda in the background during the final round of the Indy Women In Tech on September 9, 2017 at the Brickyard Crossing Golf Club in Indianapolis, Indiana. (Photo by Brian Spurlock/Icon Sportswire) (Icon Sportswire via AP Images)

New stops launch overseas, a former NFL star tees it up in Latin America and a longstanding event finds a new home. These are just a few of the noteworthy developments taking place on the PGA Tour this season. The LPGA, meanwhile, is enjoying global success and a booming youth movement, and is gearing up for three new tournaments.

There are two new events for the 2017–2018 PGA Tour season, and both are being played on international soil. The CJ Cup @ Nine Bridges was held last October in Jeju, South Korea, and The Corales Puntacana Resort & Club Championship was staged March 19–25 in the Dominican Republic. The CJ Cup was the second of three consecutive PGA Tour stops in Asia, with events in Malaysia the week before and China the week after. The event in the Dominican Republic moved to the PGA Tour after a successful two-year run on the Web.com Tour. (Former Dallas Cowboys quarterback and current CBS analyst Tony Romo, who has a +0.3 handicap, received a sponsor’s exemption to play in the tournament as an amateur. It was Romo’s first official event competing against tour professionals.)

With the addition of these two tournaments, the PGA Tour schedule includes nine events in eight countries outside the United States. There are 84 golfers representing 25 countries currently playing on the tour.

Tyler Dennis, the tour’s senior vice-president and chief of operations, said the tour wants to expand its global reach. “There’s big fan growth [in Asia], and people are playing golf and they’re more interested in watching it. Golf was in the Olympics for the first time in 2016, and we saw a lot of interest going into that and coming out of that in countries where golf wasn’t as popular.”

A staple of the PGA Tour, the AT&T Byron Nelson has been played at a variety of courses in the Dallas area since 1944 (though it has gone by different names over the years). This year’s event will be staged May 14–20. The Salesmanship Club of Dallas will act as host, as it has done since 1968, the same year Byron Nelson lent his name to the tournament.

Since then, the event has raised more than $155 million for the Salesmanship Club’s charity, Momentous Institute, making it the leading fundraiser for charity on the PGA Tour. The institute offers therapeutic services for children.

This year marks the debut of a new home for the event. Since 1994 the tournament has been played at either the Tournament Players Course or the Cottonwood Valley Course, both located at the Four Seasons in Irving. AT&T, which became title sponsor in 2015, wanted to bring the event back to the city of Dallas, but only under specific conditions. First, the Salesmanship Club had to agree to move the tournament to Trinity Forest Golf Club (which was yet to be built). Second, the city would remediate a landfill and provide that land as a site for the course. Third, the course would be developed by Bill Coore and Ben Crenshaw.

“Five years ago, the discussion was, ‘Can we bring all these things together in one location to create something really cool,’” said Jon Drago, tournament director. “Everyone had to believe in the vision of what was trying to be created. Now that everyone is on board and the passion is behind getting it done, it’s going to be pretty cool to see it all come together.”

Trinity Forest is a links-style course, similar to those played at The Open Championship courses in the United Kingdom. The course opened in October 2016 and has just 150 members, including PGA Tour star and Dallas native Jordan Spieth, as well as Romo and former Dallas Cowboys quarterback Roger Staubauch.

Drago said the goal is to give spectators everything they know and love about the Byron Nelson, but in a refreshed way. “We’ve got a blank slate right now, and we want them to come out and enjoy it and provide feedback and hopefully build on the momentum we’ve started,” he said.

Back in the Empire State

With this year’s U.S. Open taking place at Shinnecock Hills, it will be the seventh time Long Island has hosted the tournament. Bethpage Black, also on Long Island, became the first publicly owned and operated course to host the U.S. Open back in 2002; it hosted again in 2009. Kristen Jarnagin, president and CEO of Discover Long Island, said the event will once again put a global spotlight on the area. “Hosting an event of this caliber not only highlights Long Island’s most prestigious assets, including our golf courses, beaches, wine country and famed Hamptons, but also further showcases the sports offerings that are available here,” she said.

LPGA Commissioner Mike Whan has plenty of reasons for optimism regarding the state of the women’s game—68.75 million reasons, to be exact. That’s the record number of dollars in prize money to be awarded to winners in 2018. Add that to a calendar that features 34 events in 14 countries, including three new tournaments, and you’ve got the makings of an outstanding season.

According to Whan, three major trends are currently animating the LPGA Tour. The first is youth. The average age of the top 10 players in the Rolex world rankings (as of mid-February) was about 21, and those competitors came from six countries (China, Korea, USA, Sweden, Thailand, New Zealand). That ties into the second trend: the global aspect of the sport. There are more than 30 countries represented on the LPGA Tour.

“Greatness is coming from all over,” Whan said. “Korea, Thailand, Malaysia, China, Taiwan. Ten to 15 years ago, you didn’t hear anything about women’s golf from these countries. We’ve created a platform where women from all over the world are striving to get here.” And, finally, more fans can see the young global stars: The LPGA Tour will have more than 400 hours of domestic television coverage in 2018, plus more than 450 hours internationally, thanks to TV partners in 175 countries worldwide. Television ratings in the United States were up 19 percent in 2017 and continue to climb each year.

The LPGA Tour has added three new events this season—two in California and one in China. In America, the new tournaments will be held in Los Angeles and San Francisco in consecutive weeks in April. The tour returns to L.A. for the first time since 2005 to host the Hugel-JTBC Championship at Wilshire Country Club April 19–22. The tour then travels north to the Bay Area for a new, yet-to-be-named event at Lake Merced Golf Club. The tournament is sponsored by L&P Cosmetic, a Korean skin-care company. Shanghai will host a new event October 18–21. It’s the LPGA’s only tournament on the mainland of China and is part of a seven-event Asian swing this fall.

There are a handful of other scheduling changes for the LPGA in 2018. Most notably, the U.S. Women’s Open Championship, hosted by the USGA, moves from early July to a permanent spot in late May or early June. This year, it will be held May 31–June 3 at Shoal Creek near Birmingham, Alabama. The tournament’s $5 million purse is the largest of the season. The LPGA’s major season culminates September 13–16 at The Evian Championship in Evian-les-Bains, France. Whan intends to move that event to a summer date as early as 2019.

The two new West Coast stops were much-needed, Whan said. Both Los Angeles and San Francisco are global cities, and Pacific time-zone hours work well in Korea, where the sponsors are located.

Having a strong corporate sponsor in a community is essential for the success of the LPGA Tour. “We simply don’t play these events without a corporate sponsor to foot the bill,” said Whan, who noted that it takes roughly $2.5 million to organize an LPGA event. “We are who we are on a global stage because corporations step up.”

Looking ahead to 2019, both the men’s and women’s tours expect further tweaks to the schedule. On the men’s side, The Players Championship at TPC Sawgrass will move from May to March, and the PGA Championship will switch from August to May.

Dennis said the tour hopes to improve the flow of the schedule and finish the season earlier in the year, before football season starts. And he wants the sport to reach as many people as possible. “Golf tournaments are unique because they’re going on for a whole week,” he said. “It’s not just golf. There are other ancillary things that anybody can enjoy—charitable components, economic impact. We have a lot of great opportunities, both in the markets that we go to every year, and the new ones.”

As for the LPGA, look for three innovative new events next season—two more in the United States and another overseas. Whan said they will not be standard four-day, 72-hole events, although details of only one have been released—an inaugural Diamond Resorts Tournament of Champions in Orlando for past tour champions, to be held January 17–20.

Whatever form those events take, there are many reasons for women’s golf fans to be excited about the future of the sport. “Ten years ago, we wouldn’t have been able to have the dreams we have today because you’re too busy fighting for stability,” Whan said. “Today, they’re realistic because we’ve built a foundation to have dreams that are much bigger than this association’s ever achieved.”