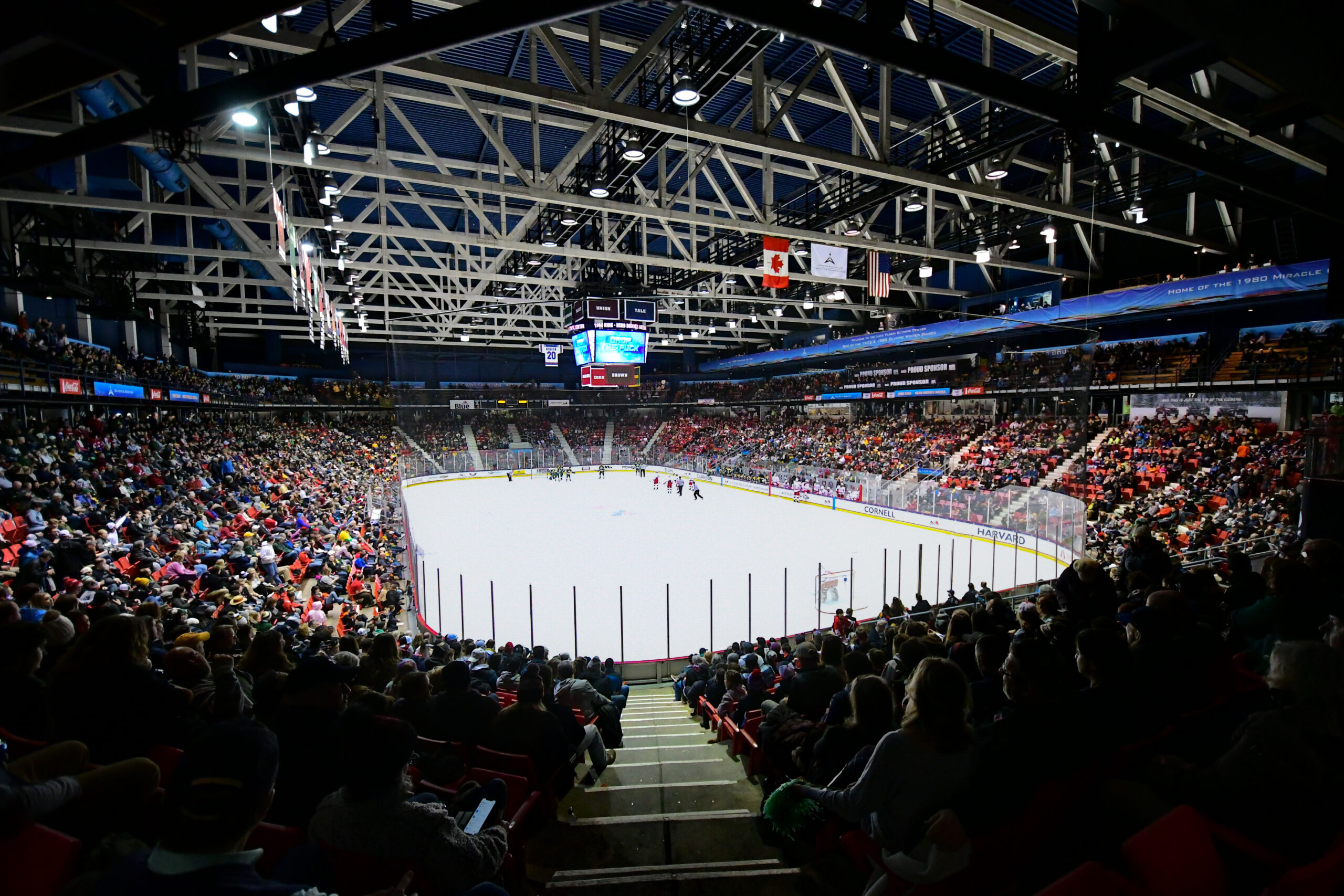 The 1980 Rink in Lake Placid, New York, is forever known as home to the 'Miracle on Ice' and the historic U.S. hockey win over the Soviet Union. This year at the FISU Winter World University Games, it will host the medal rounds for men's and women's hockey plus curling and short-track speedskating. Photo courtesy Lake Placid CVB

Lake Placid, the little village of 8,000 in the Adirondacks region of New York, has a special place in the heart of all winter sports enthusiasts.

It is, of course, home to the “Miracle on Ice” in 1980, let alone the almost super-human exploits of Eric Heiden winning five speedskating gold medals. One of the few places in the world to be able to lay claim to being a two-time host of the Olympic Games — having hosted in 1932 and 1980 — this month it will also be able to say it’s a two-time host of the FISU Winter World University Games, which start January 12.

“These are real university athletes from around the world,” said Jim McKenna, president and chief executive officer of the Lake Placid Convention and Visitors Bureau. “When we look at this, this as sort of true sport, true competition and not all cluttered with advertising and sponsorships. And we think that that’s going to be something that’s we think can grow around our country.”

This year’s FISU Games is an 11-day international festival and competition combining high-level sport with educational and cultural events, all taking place in Lake Placid and the surrounding region. With more than 2,500 participants from over 50 countries, this event is twice the size of the 1980 Olympics the village hosted.

Given the size of the event, Lake Placid organizers have worked to make sure all of the region’s venues are used, not just in Lake Placid. For men’s and women’s hockey, the preliminary rounds will be held in the villages of Potsdam and Canton while Lake Placid’s rinks host short track speedskating and figure skating. Once those events are done, the medal rounds for hockey will be at the famous rink.

And when it comes to the venues, their use not only for this month and beyond is one of the storylines for the village and its rebirth as a winter sports destination for both national and international events.

“It’s going to have a long-term positive effect for the awareness of this region certainly in winter sports, but also in the Adirondacks in general,” McKenna said. “Whenever there’s an opportunity to get that many international athletes and dignitaries to a community, it ripples for many years to come. … The renovation process here not only brought the facilities up to the international standards, but it added some direct tourism components to it. So we think there’s going to be a long-term positive economic impact.”

The NCAA Division I Alpine and Nordic Skiing championships. A World Cup in ski jumping in February, the first to be held in Lake Placid in 31 years and the first in North America in two decades. The world championships in synchronized figure skating at the 1980 rink. A bobsled and skeleton World Cup in December along with the world push championships.

Mike Pratt, president and chief executive officer of the Olympic Regional Development Authority, rattles off all the events in addition to the FISU Winter Games that the village is hosting this season. It’s the hundreds of millions of dollars spent on renovating nearly every square inch of the venues used for the 1980 Olympic Games over the past five years that has paid off for the region. The focus on renovating venues for use beyond winter sports also extends to being for more than elite athletes.

“The 1980 Olympic venues were developed for a two-week event and the devotion and ingenuity of the staff have maintained them for 42 years,” Pratt said. “But now philosophically as we had an opportunity to modernize these events, we committed to having year-round facilities with event training and hosting capabilities year-round for both summer and winter competitions and training as well as for the recreational enthusiasts and the tourists.”

Both Pratt and McKenna said one venue in particular where the renovation has paid immediate dividends is Mount Van Hoevenberg. The home for bobsled, luge, biathlon and Nordic combined, what was a scattered layout now has one athlete’s lodge, one location for drug testing when needed at events and one Awards Plaza.

“It’s a lot of multi-use occupancy and it’s created a lot of synergies from the different disciplines of sports and the competitors and the executives,” Pratt said. “The ski jumps — we never had summer training on the Big Hill and we have it now,” making it the only facility in North America with that designation.

At the Olympic Center in the heart of the village, the 1980 rink has been modified so that it can host games on both NHL- and international-sized ice surfaces. The commercial refrigeration system is also more efficient, allowing for ice temperatures and speeds to be adjusted on an operator’s phone. Knowing the 1980 rink’s stature in hockey circles, Pratt said “we decided to forgo the opportunity to install a lot of bells and whistles and neon, and what we think we did was really appropriate and it’s turned out classy.”

The Olympic Center was the first arena with a covered roof for Olympic competition when it was built for the 1932 Games. The rink is still used regularly as well and the connecting space between the 1932 and 1980 rinks, which for years had been nondescript, has also been modernized with a restaurant in the space. It also connects the village’s history — the spot is called Roamers Lake Placid after the semi-pro hockey team that played in Lake Placid from the mid-1940s to the early 1970s.

“I think it’s stunning, the exterior masonry and little details,” Pratt said of the venue’s updated look. “The new LED lights give us a chance to put on a nation’s colors or recognize a cause with our lighting systems. And we hung a set of the original 1980 rings on the side of the building and put LED lights in the ring colors behind it.”

The new efficiency of each venue also plays into a key part of Lake Placid’s FISU hosting philosophy — sustainability and adapting to the effects of climate change, a major topic in the winter sports scene.

“There’s a world forum called Save Winter, and we’ve got some high-level national international speakers coming in,” said McKenna, adding that the cauldron and torch for the FISU Games will be carbon-free as well — “we’re sort of set setting our stake in the ground about this is how it should happen in the future.”

The Save Winter world forum is designed to link the environment with competition aspects of the event. The Save Winter project will be a theme at the FISU World Conference that will be held in Lake Placid and competitions will be at venues that have shown a commitment to sustainability and combating climate change impacts to winter activities.

The FISU World Conference will feature Bill McKibben, author, activist and environmentalist, as well as athlete-advocates and leading environmental researchers and authors from universities around the world. One of the sponsors of the sustainability initiative is the Panasonic Green Impact Campaign that was unveiled at CES 2023 in Las Vegas and the company’s commitment to ecologically producing sustainable technologies for a healthier planet.

“We believe we must all be champions for sustainability and do our part to address the impact we have on the planet. Our Panasonic GREEN IMPACT initiative is about taking direct actions to counteract the effects of climate change on our planet by reducing our CO2 emissions and achieving net-zero in our operations by 2030. We’re excited to support the Lake Placid 2023 FISU World University Games to help effect positive change and further restore the promise of a fulfilling life for future generations.” Megan Lee, chairwoman and chief executive officer of Panasonic North America.

McKenna points to the recent announcement by the IOC wanting to examine the sustainability issue for winter sports, including the idea of having a permanent rotation of Winter Games hosts: “I think the climate issue that we’re facing right now, we have to face that head on and look at our sports facilities, make sure we’re preparing them in a sustainable way and also taking advantage and leading the winter sports industry right now, and how we make these venues as carbon free as possible right now with the goal of making them total carbon free as we move forward.”

And moving forward is the next part of Lake Placid’s legacy as a winter sports host.

“People that have grown up here, it’s been a part of their life,” said McKenna of the village’s Olympic legacy. “Sometimes something like that, you take for granted. But we’re members of what called the World Union of Olympic Cities and we’re on the executive committee there. When you’re sitting around a table with some of the biggest cities in the world and your city has as much notoriety in this field and only 8,000 residents, it’s got a long-term positive effect on the region.”