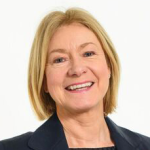 Special Olympics has named Mary Davis as chief executive officer, the first CEO in the organization’s nearly 50-year history from outside the United States. Davis, who has played several key roles in Ireland’s Special Olympics movement, has been acting CEO of Special Olympics since October, when she replaced Janet Froetscher.

Special Olympics is active in nearly 170 countries with nearly 5 million athletes participating in the organization’s nearly 100,000 events and competitions.

“Mary Davis has been a champion for the rights and inclusion of children and adults with intellectual and developmental disabilities all her working life,” said Timothy Shriver, chairman of Special Olympics. “She is a proven leader who knows how to envision a goal, craft a strategy for achieving it, and most importantly, lead a team in reaching it.”

Davis will split her time working from Dublin and Special Olympics’ global headquarters in Washington, D.C. She will have full responsibility for leading the organization and all of its functions in seeking to fulfill the mission and achieve the goals of Special Olympics’ strategic plan.

“Every position I have held in my nearly 40 years with the Special Olympics movement has prepared me for this role—the role of a lifetime,” said Davis. “I have spent my career following our athletes in helping them break down every barrier placed in their way and mobilizing a nation to prove what I already know—that Special Olympics is changing lives every day through sport and unifying our world in a way no other organization can do.”